Toledo District is the southernmost district in Belize, and Punta Gorda is the District capital. It is the least developed region[citation needed] in the country, and it features some of the most pristine rainforests, extensive cave networks, coastal lowland plains, and offshore cays. Toledo is home to a wide range of cultures: Mopan and Kekchi Maya, Creole, the Garifuna, East Indians, Mennonites, Mestizos, and descendants of US Confederate settlers.

The District has many villages, including Monkey River Town and the Toledo Settlement; the Maya villages of San Pedro Columbia, Blue Creek, Indian Creek, Santa Cruz, San Antonio, San Jose, San Felipe; and the Garifuna village of Barranco. It also has a number of Maya ruins, including Lubaantun, Nim Li Punit, Uxbenka, and Pusilha. According to the 2010 census, Toledo District had a population of 30,538 people.

The economy of Toledo relies heavily upon agriculture: crops grown include beans and corn, as well as rice which is sold to the Big Falls Rice Mill. Cacao is grown organically and sold via the Toledo Cacao Growers Association to Green & Black's for their renowned Maya Gold chocolate, as well as to chocolatiers within Belize. The District's ancient and modern-day links with chocolate are celebrated annually in May (Commonwealth Day Holiday weekend) at the Toledo Cacao Festival. Farmers grow additional crops such as coffee, yams, sweet potato, hot chili peppers, avocado, oranges and plantain for sale at the market in Punta Gorda, held each Monday, Wednesday, Friday, and Saturday.

Fishermen practice small-scale fishing from their dug-out canoes, as well as diving for lobster and conch during open season. The Port Honduras Marine Reserve just north of Punta Gorda Town is a protected area, and Toledo's waters are regarded as the permit capital of Belize. Many traditional fishermen have now trained as fly-fishing guides through the alternative livelihood projects offered by local conservation groups.

Tourism is an important, and relatively new, industry for Toledo. Once regarded as an area only for the hardy and adventurous, the opening of new tourist accommodation and the development of tours, as well as a growing awareness of the district's high proportion of protected areas, wildlife, excellent birding and the offshore cayes, have resulted in Toledo being recognized as an important ‘emerging destination’.

The most spoken language in Toledo is the Mayan Language. [1]

The Toledo District is served by the newly paved Southern Highway, as well as several bush roads to the many rural villages in the District. A regular bus service is provided by Punta Gorda-based James Bus Line, shuttling passengers between the other districts, also Punta Gorda Town is served by several daily commuter flights on Tropic Air and Maya Island Air and small, family run bus services that transport passengers to and from the rural villages. 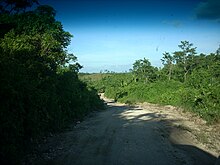 Each year, during the Commonwealth Day weekend, Toledo hosts the Chocolate Festival of Belize. The festival features chocolatiers from across the country as well as chocolate-related arts and crafts.[3] According to the project coordinator for the Toledo Cacao Growers Association Thomas Tillett, the Association currently has a membership of about 1,100 cacao farmers.[4]

Several significant ancient Mayan sites are extant in ruined form in the Toledo District. Nim Li Punit is a Classic Period Mayan site[5] with ballcourts and carved stelae. Lubaantun is a drystone constructed site with ruined pyramids and stone tombs.[6]