Tofino is a district of approximately 1,932 residents on the west coast of Vancouver Island in the Canadian province of British Columbia. The district is located at the western terminus of Highway 4 on the tip of the Esowista Peninsula at the southern edge of Clayoquot Sound.

A popular tourist destination in the summer, Tofino's population swells to many times its winter size. It attracts surfers, hikers, nature lovers, bird watchers, campers, whale watchers, fishers, or anyone just looking to be close to nature. In the winter, it is not as bustling, although many people visit Tofino and the West Coast to watch storms on the water. Close to Tofino is Long Beach, a scenic and popular year-round destination, at the Pacific Rim National Park Reserve. With its natural hot springs, Maquinna Marine Provincial Park[2] is a popular day-trip destination for tourists. Reachable by boat or floatplane, the park is located about 45 kilometres (28 mi) north of Tofino.

The settlement acquired its name in 1909 with the opening of the Tofino Post Office, named after the nearby Tofino Inlet.[3] This geographical feature had been named in 1792 by the Spanish explorers Galiano and Valdés, in honour of Admiral Vicente Tofiño de San Miguel y Wanderiales (or Vanderiales), under whom Galiano had learned cartography.[4]

Tofino Airport, 11 km (6.8 mi) south of the town, is accessible to private and commercial aircraft. Floatplanes land on the inlet in town. Coastal fog is a common morning phenomenon in the summer, complicating access by air until the weather clears.

Boat services connect Tofino with coastal communities such as Ahousat and Hot Springs Cove. Wildlife-watching tour boats operate in the area. In October 2015, a whale watching vessel capsized off the coast of Tofino resulting the deaths of 6 passengers.

Every March, the migration of thousands of grey whales is celebrated with the Pacific Rim Whale Festival. The last weekend of April is the Tofino Shorebird Festival. The first weekend of June brings the Tofino Food and Wine Festival, featuring British Columbia wines and showcasing the creations of Tofino chefs. The end of August brings the Tofino Lantern Festival (voted Tofino's most popular event by Tofino Time Magazine), early September has the week long Race for The Blue Tuna Shoot-Out[5] from 7 – 15 September, and mid-September brings "Art in the Gardens," a two-day arts and music festival. The O'Neill Coldwater Surf Classic was held 25–31 October, the first professional ASP surf event ever held in Canada. In November is the Clayoquot Oyster Festival,[citation needed][6] as well as the Queen of the Peak all-female surf competition.[7] Rip Curl Pro Tofino, the official Canadian surfing championship, has been held each year in May, since 2007.[8]

Between 1988 and 2020, Tofino was home to Poole's Land, an ecovillage and "Hippie Commune" run on Anarchist principles. The Commune provided free accommodation to seasonal workers who would come to Tofino in the summer months as well as being a centre of counterculture in the region.

Located within the Tofino vicinity is the man-made floating Island of Freedom Cove. Constructed by Wayne Adams and Catherine King in 1992, the mostly wooden structure is both home to Adams and King as well as a tourist attraction and an art gallery. Freedom Cove attempts to live as sustainably as possible by such means as by using solar power, recycling waste, composting, drinking rainwater, and eating locally grown or caught food.[9][10][11]

Play media
Pebble of the morning, on Long Beach in late summer, near Tofino

The climate is marine west coast (Köppen: Cfb, clearly included in the temperate zone). Precipitation is concentrated in the winter, which is a characteristic of Coastal British Columbia; however, the annual amount of 3,270.7 mm (128.77 in) far exceeds nearby areas. By comparison, Victoria, British Columbia, which is located only 203 km (126 mi) away, receives only 607.6 mm (23.92 in).

During the cooler season, there is a lot of precipitation, with 492.1 mm (19.37 in) in November alone. Nearly all of the precipitation that falls throughout the year is rain, with 203 days with rain and only 7.8 days with snowfall. Due to its location on the westernmost part of Vancouver Island, Tofino faces the Pacific Ocean, unimpeded by any mountains to the west (and therefore not subject to a rain shadow effect like much of the eastern island and the BC interior). Winter cyclonic storms frequently pass over the town deluging it with rain, making it one of the wettest locations in Canada. The month of November alone brings more precipitation to Tofino than that received for an entire year in parts of the BC interior such as Kamloops and Penticton.[12] Like the rest of coastal BC, summer brings relative dryness; even so, it still receives much more summertime precipitation than the interior (which can often be susceptible to drought-like conditions until the onset of autumn).[12] 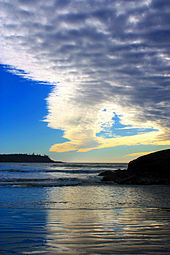 Tofino has modern cell phone and land line access (including Internet and ADSL).

Tofino has one newspaper, the Tofino-Ucluelet Westerly News. Tofino Time is a monthly magazine that publishes local new and articles about Tofino and the surrounding areas. CHMZ-FM on 90.1 FM, nicknamed Tuff City radio, is a local radio station. Tofino also receives CBC Radio One via CBXZ-FM on 91.5 FM.

Public education is offered by the School District 70 Alberni, through the Wickaninnish Community School in Tofino and Ucluelet Secondary School in Ucluelet. The town's hospital is the Tofino General Hospital, operated by the Vancouver Island Health Authority (VIHA).[16] 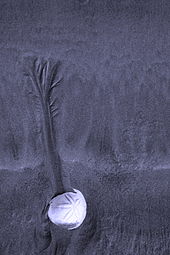 Sand dollar on a Tofino beach