Toby Albertine Maurits Alderweireld (Dutch pronunciation: [ˈtoːbi ˈɑldərʋɛːrəlt];[4] born 2 March 1989) is a Belgian professional footballer who plays for Premier League club Tottenham Hotspur and the Belgium national team. Mainly a centre back, he can also play as a right back.

Alderweireld began his professional career at Dutch club Ajax, where he won honours including three consecutive Eredivisie titles. In 2013, he moved to Atlético Madrid, where he won La Liga and reached the UEFA Champions League final in his first season. After a year on loan at Southampton, he moved to Tottenham Hotspur in 2015 and once again reached the Champions League final in 2019.

A full international since 2009, Alderweireld has earned 100 caps for Belgium and represented the country at the 2014 FIFA World Cup, UEFA Euro 2016, and the 2018 FIFA World Cup.

Born in Antwerp,[5] Alderweireld moved to Ajax's youth academy in August 2004 from Germinal Beerschot. On 22 February 2007, he signed his first professional contract, tying him to the club until 30 June 2010.[6] He was promoted to the first team for the 2008–09 season, but only made his first team debut on 18 January, in the 4–2 victory over NEC.[7] On 26 February, he made his European debut during a 1–1 draw against Fiorentina in the UEFA Cup.[8] Although he only made several appearances for the remainder of the season, he was awarded a new long-term contract extension until 2014.[9] 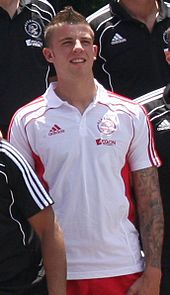 During the early stages of the 2009–10 season, Alderweireld established himself in the first team and starting XI. He became first-choice centre back along with fellow Belgian Jan Vertonghen following the departure of former captain Thomas Vermaelen to Arsenal.[10] New Ajax coach Martin Jol praised the two defenders and kept faith in the duo after a string of good performances.[11][12] During the 3–0 win against Heracles on 4 September, he scored his first league goal for the club when he opened the scoring with a header from Luis Suárez's corner-kick.[13] On 27 January, he scored a late equaliser in extra time during the KNVB Cup quarter-final against NEC; Siem de Jong scored five minutes before the final whistle to steal a 3–2 win for Ajax. At the end of the 2009–10 season, Alderweireld was named Ajax Talent of the Year.[14] He assured himself of a place in the Eredivisie giants' history books on 3 November 2011, heading in Ajax's 100th UEFA Champions League goal in the 2–1 Group G defeat by Auxerre.[15] In the 2010–11 season, he scored a stunning 25-yard strike at the San Siro against Champions League group rivals Milan in a 2–0 away win. He followed this spectacular goal with an even more impressive 32-yard strike against Feyenoord in a 2–0 home win. In the 2011–12 season, Alderweireld made significant strides in his ability as a footballer, also forming a formidable partnership in the heart of the Ajax defensive with captain and fellow Belgian Jan Vertonghen. Alderweireld also showed some impressive offensive ability, scoring a remarkable goal against Heerenveen.

On 5 August 2012, during the Johan Cruyff Shield encounter against PSV, Alderweireld managed to score for Ajax in the 44th minute, bringing his club back within a goals difference going into halftime 2–1. Unfortunately, it was a match Ajax would lose 4–2, making it the third Johan Cruyff Shield which Alderweireld participated in and finished as runners-up. The following 2012–13 season, however, would be a successful one, marking the third year in a row that Alderweireld would play Champions League football, and also winning his third consecutive Eredivisie title for Ajax and 32nd overall, having played as a starting centre back for Ajax in all three championship pursuits. Alderweireld scored a further three goals that season for Ajax, including two goals during the regular season against PEC Zwolle and Twente, as well as scoring another goal in a 2–0 home victory against Steaua București at the Amsterdam Arena, in the first leg of the Round of 32 in the 2012–13 UEFA Europa League. Having been drawn into a group with Manchester City, Real Madrid and eventual runners-up Borussia Dortmund during its Champions League campaign, Ajax had entered into the Europa League at the knockout phase having secured third place in their group, but failed to advance, losing in the second leg match in Romania 4–2 on penalty kicks after extra time. 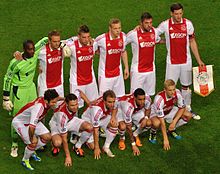 Alderweireld with Ajax teammates in 2011.

With one more year remaining on his contract, Alderweireld opted not to extend his contract with Ajax, subsequently receiving plenty of interest during the off-season, with Bayer Leverkusen, Liverpool, Napoli and Norwich City being mentioned as the most keen to sign the young defender.[16][17]

On 2 September 2013, Alderweireld joined Atlético Madrid on a four-year contract for an estimated €7 million (£6.16 million) transfer fee.[18][19] He played 12 matches as the club won La Liga; on 11 May, he headed his only goal of the season, an equaliser in a 1–1 home draw with Málaga in the penultimate round of fixtures, ensuring that Atlético remained in the title race.[20] Alderweireld played the final seven minutes and extra time of the 2014 Champions League final for Atlético in place of Filipe Luís; the team was beating city rival Real Madrid 1–0 when he entered the field of play, but Atlético eventually lost 1–4.[21]

Alderweireld was sent on a season-long loan to English Premier League side Southampton on 1 September 2014, with the option for Southampton to buy him at the end of the season.[22][23] He made his Southampton debut on 13 September, helping to keep a clean sheet in a 4–0 victory against Newcastle United.[24] On 26 December, he scored his first goal for the club, Southampton's third in a 3–1 away win away to Crystal Palace by heading James Ward-Prowse's corner kick.[25]

Southampton had a £6.8 million option to buy Alderweireld, but in July 2015 Atlético cancelled the clause for £1.5 million in order to sell to the highest bidder. Subsequent reports claimed that Atlético failed to exercise their buy-out in time.[26]

On 8 July 2015, Alderweireld joined Tottenham Hotspur on a five-year contract which runs until the summer of 2020 at White Hart Lane, despite Southampton threatening legal action over the transfer.[27] At Spurs, he was reunited with former Ajax teammates Christian Eriksen and Jan Vertonghen, who previously joined the north London side from Ajax. On 30 July, Alderweireld made his club debut in the 2015 MLS All-Star Game in Denver, Colorado. During a 2–1 defeat, Alderweireld started the game and was replaced by Federico Fazio after 62 minutes.[28]

On 26 September, Alderweireld scored his first goal for Tottenham in a 4–1 win over Manchester City at White Hart Lane.[29] His second goal for the club came in another 4–1 victory over London rivals West Ham United on 22 November.[30] On 5 March 2016, in the 183rd North London Derby, Alderweireld scored for Tottenham in a 2–2 draw against Arsenal.[31] A month later, he was Spurs' second scorer in a 3–0 win against Manchester United.[32]

In the 2016–17 season, he was a regular in the Spurs starting line-up until an injury sustained at West Bromwich Albion on 15 October.[42] This injury kept him on the injury list for several weeks,[43] until he made his return in the Champions League as a substitute against CSKA Moscow on 7 December.[44] Alderweireld picked up the final goal of the season for Tottenham, coming in the 7–1 win over already-relegated Hull City on 21 May 2017.[45] He was part of the Tottenham defense that achieved the best defensive record in the club's history, with only 26 goals conceded in the Premier League this season (only 9 of which were conceded in home league games), 6 better than the previous record of 32 conceded that was set in the 1908–09 season in the Second Division.[46]

Alderweireld played in all the Premier League and Champions League games from the start of the 2017–18 season, but on 1 November 2017, he suffered a hamstring injury in the home game against Real Madrid that ended in a 3–1 win.[47] The injury would keep him out of the team for a few months.[48] On 7 February 2018, he returned to the starting lineup in the fourth round replay of the FA Cup against Newport County, which Tottenham won 2–0.[49] However, an injury to the tendon of his hamstring suffered while training two weeks later meant that he was again out of the team.[50] He returned to the squad in April towards the end of the season.[51][52]

After a season curtailed by injuries and being out of favour, Alderweireld again became a regular player for Tottenham in the 2018–19 season. In January 2019, Tottenham took up an option to extend his contract until 2020.[53] He scored an own goal in the last minute in the tightly-fought game against Liverpool, losing 2–1.[54]

Alderweireld with Belgium at the 2018 FIFA World Cup

Alderweireld first represented Belgium at under-17 level in October 2005 and took part in the 2006 UEFA U17 Championship. After the 2008–09 season concluded, he made his senior debut for Belgium in a friendly tournament, Kirin Cup, against Chile on 29 May 2009. However, his full senior debut came three months later in a match against the Czech Republic. He was named in several 2010 World Cup qualifying squads, but was mostly an unused substitute. In October 2009, he came on as a second-half substitute for Daniel Van Buyten in the 2–0 defeat to Estonia.

Alderweireld was called up to the Belgian U21 squad for the 2011 UEFA U21 Championship qualifier against Ukraine on 13 November 2009, with the match finishing 2–0 to Ukraine. He played right back during the 2012 UEFA Euro qualification match against Turkey on 7 September 2010.