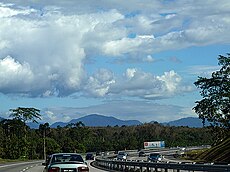 The Titiwangsa Range near Slim River

The Titiwangsa Range (Malay: Banjaran Titiwangsa; بنجرن تيتيوڠسا), also known as "Banjaran Besar" (Main Range) by locals, is the chain of mountains that forms the backbone of the Malay Peninsula. The northern section of the range is in southern Thailand, where it is known as Sankalakhiri Range (Thai: ทิวเขาสันกาลาคีรี, pronounced [tʰīw kʰǎw sǎn.kāːlāːkʰīːrīː]).

The range acts as a natural divider, dividing Peninsular Malaysia, as well as southernmost Thailand, into east and west coast regions. The length of mountain range is about 480 km from north to south.

The Titiwangsa Range is part of a suture zone that runs north-south, starting in Thailand at the Nan-Uttaradit suture zone (partly coincident with the Dien Bien Phu fault), and extending south towards Peninsular Malaysia (Bentong-Raub suture zone).[1] The western half of the Titiwangsa Mountains in Peninsular Malaysia is an amalgamation of continental terranes known as Cimmeria or Indochina, whereas the eastern half is an amalgamation of continental terranes Sinoburmalaya or Sibumasu. These two halves of terranes were separated by the Paleo-Tethys Ocean.[2][3]

The Cimmeria was separated from Gondwana around 400 mya during the Devonian and rifted towards Laurasia, the northeastern arm of Pangea. It attached to Laurasia completely around 280 mya during the Late Permian.

Sibumasu terranes on the other hand, only started to separate from Gondwana during the Early Permian and rifted towards Indochina. The collision of Sibumasu terranes and Indochina terranes during 200mya Late Triassic resulted in the closure of the Paleo-Tethys Ocean and formation of the modern Titiwangsa Mountain belts.

This mountain range is a part of the wider Tenasserim Hills system. It forms the southernmost section of the Indo-Malayan cordillera which runs from Tibet through the Kra Isthmus into the Malay Peninsula.[4]

The Titiwangsa mountain range begins in the north as the Sankalakhiri Range, a prolongation of the Nakhon Si Thammarat Range which includes the smaller Pattani, Taluban, and Songkhla sub-ranges. The main range runs approximately from northwest to southeast across the border into Malaysia and ends in the south near Jelebu, Negeri Sembilan, Malaysia. Foothills extend further southeastwards into Melaka and Johor with its terminus at Mount Pulai.

The highest elevation is 2,183 m (7,162 ft) Gunung Korbu. On the Thai side the highest point is 1,533 m Ulu Titi Basah (ยูลูติติ บาซาห์), at the Thai/Malaysian border between Yala Province and Perak.[5] In the southern foothills, the highest is 1,276 m Mount Ophir.

Several popular tourist destinations such as Royal Belum, Cameron Highlands, Genting Highlands and Fraser's Hill are located on the range.

A number of roads cut through the Titiwangsa Forest Complex.