Timmins (/ˈtɪmɪns/ TIM-ins) is a city in northeastern Ontario, Canada, on the Mattagami River. The city is the fourth-largest city in the Northeastern Ontario region with a population of 41,788 (2016).[3] The city's economy is based on natural resource extraction and is supported by industries related to lumbering and to the mining of gold, zinc, copper, nickel and silver. Timmins serves as a regional service and distribution centre. The city has a large Francophone community, with more than 50% bilingual in French and English.[4] 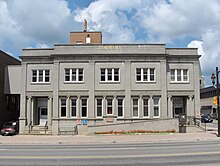 Research performed by archaeologists indicate that human settlement in the area is at least 6,000 years old; it's believed the oldest traces found are from a nomadic people of the Shield Archaic culture.[5][6][7]

Up until contact with settlers, the land belonged to the Mattagami First Nation peoples. Treaty Number Nine of 1906 pushed this tribe to the north side of the Mattagami Lake, the site of a Hudson's Bay trading post first established in 1794.[8] In the 1950s, the reserve was relocated to the south side of the lake, to its present-day location.[7][9]

Gold discoveries in the Porcupine Camp during the early years of the 20th Century attracted investors to the area.

According to local folklore, on June 9, 1909, Harry Preston slipped on a rocky knoll and the heels of his boots stripped the moss to reveal a large vein of gold, which later became the Dome Mine. Another theory on how gold was discovered in the Timmins region is that an Indigenous man led Harry Preston to the location where he knew gold would be found. These, however, are only folklore commonly known by citizens of Timmins. The true way gold was discovered remains unknown.

On the same day as the Hollinger discovery, Sandy McIntyre discovered the McIntyre Mine near Pearl Lake, four miles away.[11][12] These mines are known as the "Big Three".

In November 1912, 1,200 members of the Western Federation of Miners Local 145 held a strike at all three mines in response to a proposal to lower their wages.[14] Mine operators hired gun thugs, who fired on the picket line and were ordered out by the provincial government.[15] After months without work, many men chose to leave the settlement; only 500 miners returned to work in July 1913.[14] The strike won the men a nine-hour workday and a pay increase.[14]

The Great Depression did not adversely affect the economy of the area, and jobs were available in mining and lumber.

The area became home to dozens of prospectors during the "Porcupine Gold Rush", who explored the areas around Porcupine Lake and the Frederick House River. Rich ore deposits in the Canadian Shield led to Timmins being founded as a company town to house Hollinger employees. In 1912, mine manager Alphonse "Al" Paré named the mining settlement for his uncle, Noah Timmins, who was President of Hollinger Mines.[17] Most settlers grouped around Porcupine Lake and the Dome, one mile from the lake. Four miles down the road, around the McIntyre Mine, the hamlet of Schumacher was established.[16]

The rail system that began to operate around Timmins in 1911 accelerated the growth of the camp. That same year, two days after the first train arrived in the Porcupine, the entire camp was destroyed in the fire of 1911, although the area was rebuilt within two months.[citation needed]

In 1917, a dam was built at Kenogamissi Falls, downriver from Mattagami Lake, to provide power for the Timmins-Porcupine mining camp; Mattagami Lake was consequently flooded.[7]

In 1973, 35 townships covering 1,260 square mile, including Porcupine, South Porcupine, Schumacher, and Timmins were organized into the City of Timmins.[17]:140

In the 1990s, the City of Timmins became a regional service and distribution centre for Northeastern Ontario.[16]

Timmins is near the northern periphery of the hemiboreal humid continental climate (Dfb). Timmins has very cold winters, being in northern Ontario, but temperatures in late summer and autumn tend to be among the coldest for any major city in any Canadian province, although during the spring and summer it can get hot. The highest temperature ever recorded in Timmins was 39.4 °C (103 °F) on 12 July 1936.[18] The coldest temperature ever recorded was −45.6 °C (−50 °F) on 1 February 1962.[2] 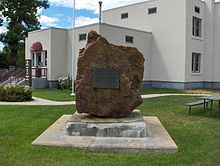 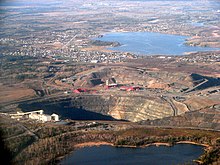 Specimen gold, probably from Pamour Mine

Hollinger Park is one of the city's main recreational spaces. The park is divided in two sections, the north side being the public park area, with the south side having a regulation sized baseball diamond and two soccer fields for more organized outdoor recreational endeavours. The baseball park has been home to the Timmins Men's Baseball League since 1985. Former Timmins resident Shania Twain played a concert at Hollinger Park on July 1, 1999. An estimated 22,000 people attended the outdoor concert.[29][30]

The Pioneer Museum is located 39.5 km (24.5 mi) northeast of the city centre in Connaught, a community of 400 people. Nearby communities include Barbers Bay, Dugwal, Finn Road, Hoyle, Ice Chest Lake, McIntosh Springs and Nighthawk. Local history in the area dates back over 300 years.[31]

The Porcupine Miner's Memorial tribute is a statue of the miner, head frame and tablets bearing the names of 594 miners killed in mining accidents were unveiled in 2008. The following year, the statues of a mother and two children were unveiled to commemorate those families left behind.[31]

The Timmins Public Library was constructed in 2005 with locally manufactured products, using wood as the main structural material, making efficient use of our natural resources while reducing construction waste. The eco-friendly design was recognized by the Green Building Initiative and the building achieved a 3 Green Globes rating for its efficient use of resources and sustainable development.[31] 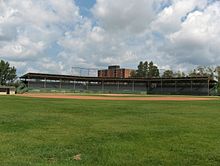 The city is currently represented by MPP Gilles Bisson. Bisson also serves as the House Leader[34] for the official opposition. He has served the Timmins area for 29 years, being first elected in 1990.

The Member of Parliament for Timmins-James Bay is currently Charlie Angus.

The two main postsecondary institutions in Timmins is Northern College, a College of Applied Arts and Technology and Collège Boréal, which also has a sister campus of Université de Hearst.[35] Algoma University also offers degrees in Social Work and Community Development on the Northern College Campus in South Porcupine. 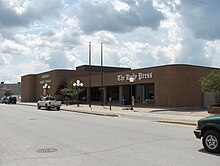 The 134-bed hospital was formed in 1988 from the merger of St. Mary's General Hospital and Porcupine General Hospital. The two former hospitals were replaced in 1996 and 1993, respectively, when the current site was built.

The Timmins Rock of the Northern Ontario Junior Hockey League represent Timmins in hockey. They are the city's junior A team. And their affiliate, Timmins Majors, of the Great North Midget League, are the Midget AAA team. They both play at the McIntyre Arena.

Timmins Victor M. Power Airport is the main regional airport for the Timmins area. Regional ground transportation is provided by Ontario Northland Motor Coach Services operating out of the Timmins Transit Terminal.[37] The nearest communities with train service are more than 100 kilometers away. They include Foleyet to the west and Gogama to the south on Via Rail's Canadian train line. To the north of Timmins, Cochrane is the southern terminus of the Ontario Northland Railway Polar Bear Express. Matheson and Porquis Junction were formerly the closest stations to the city. Local transit is provided by Timmins Transit. 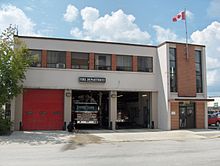