The Time Warner Center is a mixed-use building complex[4] in Columbus Circle, Manhattan, New York City. It was developed by The Related Companies and AREA Property Partners, and designed by David Childs and Mustafa Kemal Abadan of Skidmore, Owings & Merrill.[5]

The Time Warner Center consists of two 750 foot (230 m) twin towers bridged by a multi-story atrium containing upscale retail shops. The complex also contains office and residential tenants. Construction began in November 2000, following the demolition of the New York Coliseum, and a topping-out ceremony was held on February 27, 2003. The property had the highest-listed market value in New York City, $1.1 billion, in 2006.[6]

Originally constructed as the AOL Time Warner Center, the building encircles the western side of Columbus Circle and straddles the border between Midtown and the Upper West Side. The total floor area of 2.8 million square feet (260,000 m2) is occupied by office space, including an R&D center for VMware; residential condominiums; and the Mandarin Oriental, New York hotel. The Shops at Columbus Circle is an upscale shopping mall located in a curving arcade at the base of the building, with a large Whole Foods Market grocery store on the lower level. Deutsche Bank will replace WarnerMedia as the anchor tenant of the 1.1-million-square-foot (100,000 m2) office area beginning in 2021, at which time it will be renamed the Deutsche Bank Center.[7] 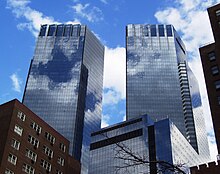 The top of the towers as seen from Tenth Avenue

The redevelopment of the New York Coliseum site at Columbus Circle was first proposed in 1985. It was delayed for nearly 15 years after Mortimer Zuckerman's Boston Properties initially won a bidding contest to buy the property from the New York Coliseum's owners, the Metropolitan Transportation Authority. The company proposed to construct a headquarters for Salomon Brothers on the 4.5-acre (18,000 m2) Coliseum site.[8] Opponents of the project were concerned it would cast a shadow on Central Park.[9] In 1988, the sale was nullified[10] and Salomon Brothers withdrew from the project.[11] New York City and Boston Properties renegotiated the deal to call for a 52-story structure designed by David Childs at a reduced price of $357 million.[12]

The plan still languished until 1998 when the Coliseum site was sold to Time Warner and The Related Companies for $345 million.[13] The Coliseum was demolished in 2000.[14] The Time Warner Center was the first major building to be completed in Manhattan after the September 11 attacks, although it was already under construction at the time of the attacks in 2001. While some New Yorkers noted the uncanny resemblance of the Time Warner Center to the fallen Twin Towers, the building's developer refuted any intentional similarity.[15]

GMAC agreed to provide a $1.22 billion senior loan along with $200 million in mezzanine financing for the project, believed to be the largest construction financing ever for a real estate development in New York City at the time. CalPERS and MacFarlane Partners also purchased a 49.5% stake in the retail space, the office space not occupied by AOL Time Warner, and the center's parking structure.[16] The development was opened in phases in 2003.[17] At the end of 2003, Credit Suisse First Boston provided $620 million to refinance part of the development's construction loan.[18]

The Sunshine Group was in charge of marketing the building. Sandie N. Tillotson bought the top floor of the then uncompleted north tower for $30 million shortly after the September 11 attacks — a record for a condominium at the time.[19] That sale would be eclipsed in 2003 when Mexican financier David Martinez paid $54.7 million for a penthouse condo, then a record for New York residential sales.

In January 2014, Time Warner sold its stake in the Columbus Circle building for $1.3 billion to Related Companies, the Abu Dhabi Investment Authority, and GIC Private Limited and formally announced it would move in early 2019 to 30 Hudson Yards, a development owned by Related.[20] The companies funded the purchase of the office space with a five-year, $675 million mortgage from Deutsche Bank and Bank of China.[2][21]

In May 2018, Deutsche Bank announced that it was leasing all 1.1 million square feet (100,000 m2) of office space, formerly occupied by Time Warner, for 25 years beginning in the third quarter of 2021.[22] Following the news, Related Companies announced that the complex would be officially renamed the Deutsche Bank Center upon the company's arrival.[7] In May 2019, Related refinanced the office portion of the development with a $1.1 billion loan from Wells Fargo.[23] After announcing plans to drastically reduce its overseas activities in mid-2019, it was questioned whether Deutsche Bank would actually use the whole office area as planned.[24]

The Time Warner Center has 55 floors. The top floor is labeled as the 77th floor.[25]

A multistory cable-net wall serves as the entrance to the atrium where the center's two 55-story towers intersect. Spanning 98 feet (30 m) across and 160 feet (50 m) high, the cable structure was the largest in North America at the time of its completion.[26] 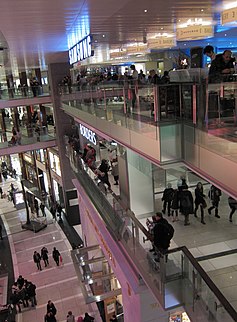 The lobby and shops in Time Warner Center

The building has an entrance to the 59th Street–Columbus Circle station of the New York City Subway near Columbus Circle's south end.[28]

The center has ground floor tenants including designer shops and restaurants.[29] On February 5, 2004, Whole Foods Market opened its 68,000 square feet (6,300 m2) Columbus Circle store in the Time Warner Center.[30] In 2005, the wine shop in the store closed after the store pleaded no contest to state charges of illegal operation. Whole Foods planned to replace the center with an expanded coffee bar, a gelato counter, and additional checkout lines.[31] Upper floors include the restaurants Masa, Per Se and Porter House New York.

The complex is also home to three entertainment areas. CNN's studios in the Time Warner Center, prior to their move to 30 Hudson Yards in 2019, were one of the network's three primary broadcast sites (along with facilities in Washington, D.C. and Los Angeles). Shows which originated from the New York facility include Anderson Cooper 360° and Erin Burnett OutFront. In 2005, Jazz at Lincoln Center announced a partnership with XM Satellite Radio which gave XM studio space at Frederick P. Rose Hall to broadcast both daily jazz programming and special events such as the Artist Confidential show featuring Carlos Santana.[32][33] Anderson Cooper's daytime talk show, Anderson recorded in Jazz at Lincoln Center's The Allen Room for a year before moving to Studio 42 at the CBS Broadcast Center.