Advertisement - You can get this game from STEAM
River flowing from Turkey through Iraq and Syria
For other uses, see Tigris (disambiguation).

The Tigris (/ˈtaɪɡrɪs/) is the eastern of the two great rivers that define Mesopotamia, the other being the Euphrates. The river flows south from the mountains of southeastern Turkey through Iraq and empties into the Persian Gulf.

The Tigris is 1,750 km long, rising in the Taurus Mountains of eastern Turkey about 25 km southeast of the city of Elazig and about 30 km from the headwaters of the Euphrates. The river then flows for 400 km through Turkish Kurdistan before becoming part of the Syria-Turkey border. This stretch of 44 km is the only part of the river that is located in Syria.[1] Some of its affluences are Garzan, Anbarçayi, Batman, and the Great and the Little Zab.[3]

Close to its confluence with the Euphrates, the Tigris splits into several channels. First, the artificial Shatt al-Hayy branches off, to join the Euphrates near Nasiriyah. Second, the Shatt al-Muminah and Majar al-Kabir branch off to feed the Central Marshes. Further downstream, two other distributary channels branch off (the Al-Musharrah and Al-Kahla), to feed the Hawizeh Marshes. The main channel continues southwards and is joined by the Al-Kassarah, which drains the Hawizeh Marshes. Finally, the Tigris joins the Euphrates near al-Qurnah to form the Shatt-al-Arab. According to Pliny and other ancient historians, the Euphrates originally had its outlet into the sea separate from that of the Tigris.[4]

Baghdad, the capital of Iraq, stands on the banks of the Tigris. The port city of Basra straddles the Shatt al-Arab. In ancient times, many of the great cities of Mesopotamia stood on or near the Tigris, drawing water from it to irrigate the civilization of the Sumerians. Notable Tigris-side cities included Nineveh, Ctesiphon, and Seleucia, while the city of Lagash was irrigated by the Tigris via a canal dug around 2900 B.C.

The Tigris has long been an important transport route in a largely desert country. Shallow-draft vessels can go as far as Baghdad, but rafts are needed for transport upstream to Mosul.

General Francis Rawdon Chesney hauled two steamers overland through Syria in 1836 to explore the possibility of an overland and river route to India. One steamer, the Tigris, was wrecked in a storm which sank and killed twenty. Chesney proved the river navigable to powered craft. Later, the Euphrates and Tigris Steam Navigation Company was established in 1861 by the Lynch Brothers trading company, who had two steamers in service. By 1908 ten steamers were on the river. Tourists boarded steam yachts to venture inland as this was the first age of archaeological tourism, and the sites of Ur and Ctesiphon became popular with European travelers.

After the war, river trade declined in importance during the 20th century as the Basra-Baghdad-Mosul railway, a previously unfinished portion of the Baghdad Railway, was completed and roads took over much of the freight traffic. 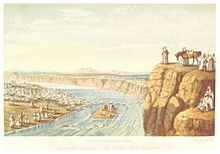 The Ancient Greek form Tigris (Τίγρις) meaning "tiger" (if treated as Greek) was adapted from Old Persian Tigrā, itself from Elamite Tigra, itself from Sumerian Idigna.

The original Sumerian Idigna or Idigina was probably from *id (i)gina "running water",[6] which can be interpreted as "the swift river", contrasted to its neighbour, the Euphrates, whose leisurely pace caused it to deposit more silt and build up a higher bed than the Tigris. The Sumerian form was borrowed into Akkadian as Idiqlat, and from there into the other Semitic languages (cf. Hebrew Ḥîddeqel, Syriac Deqlaṯ, Arabic Dijlah).

Another name for the Tigris used in Middle Persian was Arvand Rud, literally "swift river". Today, however, Arvand Rud (New Persian: اروند رود) refers to the confluence of the Euphrates and Tigris rivers (known in Arabic as the Shatt al-Arab). In Kurdish, it is also known as Ava Mezin, "the Great Water". 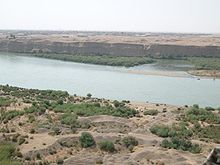 Outside of Mosul, Iraq

The name of the Tigris in languages that have been important in the region: 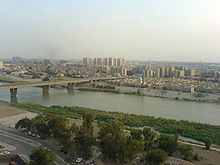 The Tigris is heavily dammed in Iraq and Turkey to provide water for irrigating the arid and semi-desert regions bordering the river valley. Damming has also been important for averting floods in Iraq, to which the Tigris has historically been notoriously prone following April melting of snow in the Turkish mountains.

Recent Turkish damming of the river has been the subject of some controversy, for both its environmental effects within Turkey and its potential to reduce the flow of water downstream. Mosul Dam is the largest dam in Iraq.

Water from both rivers is used as a means of pressure during conflicts.[9]

In 2014 a major breakthrough in developing consensus between multiple stakeholder representatives of Iraq and Turkey on a Plan of Action for promoting exchange and calibration of data and standards pertaining to Tigris river flows was achieved. The consensus which is referred to as the "Geneva Consensus On Tigris River" was reached at a meeting organized in Geneva by the think tank Strategic Foresight Group.[10]

In February 2016, the United States Embassy in Iraq as well as the Prime Minister of Iraq Haider al-Abadi issued warnings that Mosul Dam could collapse.[11] The United States warned people to evacuate the floodplain of the Tigris because between 500,000 and 1.5 million people were at risk of drowning due to flash flood if the dam collapses, and that the major Iraqi cities of Mosul, Tikrit, Samarra, and Baghdad were at risk.[12]

In Sumerian mythology, the Tigris was created by the god Enki, who filled the river with flowing water.[13]

In Hittite and Hurrian mythology, Aranzah (or Aranzahas in the Hittite nominative form) is the Hurrian name of the Tigris River, which was divinized. He was the son of Kumarbi and the brother of Teshub and Tašmišu, one of the three gods spat out of Kumarbi's mouth onto Mount Kanzuras. Later he colluded with Anu and the Teshub to destroy Kumarbi (The Kumarbi Cycle).

The Tigris appears twice in the Old Testament. First, in the Book of Genesis, it is the third of the four rivers branching off the river issuing out of the Garden of Eden.[7] The second mention is in the Book of Daniel, wherein Daniel states he received one of his visions "when I was by that great river the Tigris".[14]

The Tigris River is also mentioned in Islam. The tomb of Imam Ahmad Bin Hanbal and Syed Abdul Razzaq Jilani is in Baghdad and the flow of Tigris restricts the number of visitors. Coat of arms of the Kingdom of Iraq 1932–1959 depicting the two rivers, the confluence Shatt al-Arab and the date palm forest, which used to be the largest in the world