Tidal mill at Olhão, Portugal
This article is about the type of watermill. For other uses, see Tide mill (disambiguation).

A tide mill is a water mill driven by tidal rise and fall. A dam with a sluice is created across a suitable tidal inlet, or a section of river estuary is made into a reservoir. As the tide comes in, it enters the mill pond through a one-way gate, and this gate closes automatically when the tide begins to fall. When the tide is low enough, the stored water can be released to turn a water wheel.

Tide mills are usually situated in river estuaries, away from the effects of waves but close enough to the sea to have a reasonable tidal range. Cultures that built such mills have existed since the Middle Ages, and some may date back to the Roman period.

A modern version of a tide mill is the electricity-generating tidal barrage.

Possibly the earliest tide mill in the Roman world was located in London on the River Fleet, dating to Roman times.[1]

Since the late 20th century, a number of new archaeological finds have consecutively pushed back the date of the earliest tide mills, all of which were discovered on the Irish coast: A 6th-century vertical-wheeled tide mill was located at Killoteran near Waterford.[2] A twin-flume, horizontal-wheeled tide mill, dating to c. 630, was excavated on Little Island in Cork.[3][4] Alongside it, another tide mill was found that was powered by a vertical undershot wheel.[3][4] The Nendrum Monastery mill from 787 was situated on an island in Strangford Lough in Northern Ireland. Its millstones are 830mm in diameter and the horizontal wheel is estimated to have developed 7/8HP at its peak. Remains of an earlier mill dated at 619 were also found at the site.[5][6] 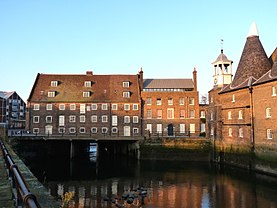 The earliest recorded tide mills in England are listed in the Domesday Book (1086). Eight mills are recorded on the River Lea (the site at Three Mills remains, with Grade I listed buildings and a small museum), as well as a mill in Dover harbour. By the 18th century, there were about 76 tide mills in London, including two on London Bridge.

Woodbridge Tide Mill, an excellent example, survives at Woodbridge, Suffolk, England. This mill, dating from 1170 and reconstructed in 1792, has been preserved and is open to the public. It was further restored in 2010 and re-opened in 2011 in full working order. It is the second working tide mill in the United Kingdom that is regularly producing flour. Carew Castle in Wales also has an intact tide mill, but it is not operating. The first tide mill to be restored to working order is Eling Tide Mill in Eling, Hampshire. Another example, now extant only in historic documents, is the mill in the hamlet of Tide Mills, East Sussex. Traces of a tide mill may be seen at Fife Ness, revealed through an archaeological survey.[7]

A mediæval tide mill still operates at Rupelmonde near Antwerp, and there are several that have survived in the Netherlands.

At one time there were 750 tide mills operating along the shores of the Atlantic Ocean: approximately 300 in North America,[8][9] including many in colonial Boston over a 150-year span. [10]In addition, 200 have been documented in the British Isles, and 100 in France.[11] The Rance estuary in France was also home to some of these mills.

By the mid-20th century, the use of water mills had declined dramatically. In 1938, an investigation by Rex Wailes discovered that of the 23 extant tidal mills in England, only 10 were still working by their own motive power. Of one at Beaulieu, H. J. Massingham wrote in the 1940s,

"Part of the mill is built on piles into the river and is weatherboarded, while the rest of the building is a warm red brick roofed with lozenge-shaped and rounded tiles which I believe are called fish-tiles. All the interior is of wood - ladders, bins for the meal, floor-boarding, square pillars, beams, narrow passages, fittings, shaft rising to the first floor and all. So ramshackle is the arrangement of the props and supports that it is a wonder that the whole edifice does not tumble about the miller's ears like a pack of cards. The point is that it has stood in this way for something like six centuries, and that gives the explorer into its dusky depths a more penetrating notion of how the old builders could build, more than does a Gothic church or even a cathedral. The pulse and swing of the great wheel sets the whole building in an ague, but it will still be standing when all the flimsy excrescences of development between Beaulieu and Poole have fallen down."[12]

Newer types of tidal power often propose construction of a dam across a large river estuary. Although hydroelectric power represents a source of renewable energy, each proposal tends to come under local opposition because of its likely adverse effect on coastal habitats. One proposal, which was developed in 1966, is the Rance barrage, which generates 250MW. Unlike historical tide mills, which could operate only on an ebb tide, the Rance barrage can generate electricity on both flows of the tide, or it can be used for pumped storage, depending on demand. A less intrusive design is a 1MW free-standing turbine, constructed in 2007 at Strangford Lough Narrows; this site is close to an historic tide mill.