The Thousand Days' War (Spanish: Guerra de los Mil Días) was a civil war fought in Colombia from 17 October 1899 to 21 November 1902, at first between the Liberal Party and the government led by the National Party, and later – after the Conservative Party had ousted the National Party – between the liberals and the conservative government. Caused by the longstanding ideological tug-of-war of federalism versus centralism between the liberals, conservatives, and nationalists of Colombia following the implementation of the Constitution of 1886 and the political process known as the Regeneración (es), tensions reached a fever pitch after the presidential election of 1898, and in 17 October 1899, official insurrection against the National government was announced by members of the Liberal Party in the Department of Santander. Hostilities didn't begin until the 11th of November, when liberal factions attempted to take over the city of Bucaramanga, giving way to active warfare. It would end three years later with the signing of the Treaty of Neerlandia and the Treaty of Wisconsin. The war resulted in a Conservative victory, and ensured the continued dominance of the Conservative Party in Colombian politics for another 28 years. Colombia's political structure as a unitary state has not been challenged since.

An international conflict, the war extended into Ecuadorian and Venezuelan territory. Conservative and liberal factions of those two countries, as well as Guatemala, El Salvador, and Nicaragua, backed their respective parties within Colombia. American interests in the Panama Isthmus led to an American intervention and naval deployment in Panama (then part of Colombia) under the guise of upholding the Treaty of Mallarino-Bidlack.

With an estimated 100,000 to 150,000 fatalities, about 2.5 percent of the nation's population at that time, the conflict was the deadliest and most destructive war in the history of Colombia. It led to severe economic, political, and social repercussions for the country, including a partial collapse of the nation's economy, continued governmental instability, and the eventual loss of the Department of Panama as an incorporated territory of the republic in 1903.

Throughout the 19th century, Colombia was a politically unstable country, a factor that evolved during 1886 into what became the main cause of the war. This was the year in which the 1863 constitution was suppressed and replaced by a more centralist and conservative document. The 1863 constitution had been criticized as a result of federalist excesses during the period in which the Liberal radicals were in power.

With the Regeneración (Regeneration) period and the creation of the 1886 constitution, the centralist regime only managed to aggravate the political problems. The governments of some departments soon began to complain about these problems to the central government. Poor political decisions also resulted in economic problems. The indigenous leader Victoriano Lorenzo had been fighting for Panamanian and indigenous land rights as well as economic autonomy, and soon negotiated an alliance with the Liberal cause.[2]

Departments of Colombia in 1890

The war began as a result of confrontation between the Liberals and Conservatives. The Conservatives had used fraudulent elections to remain in power, and this resulted in much anger amongst the opposition. Additionally, President Manuel Antonio Sanclemente was too ill to rule the country, resulting in a power vacuum.

The intended date for the beginning of the civil war was October 20, 1899. However, due to the imprudence of some of the Liberal generals, especially Paolo Emilio Villar,[3] who wished to begin the war on October 17, it was changed. The reaction of many Liberals was hesitant, since they believed that they did not have sufficient numbers or organization. Despite this, the rebellion began in the municipality of Socorro, Santander, and the rebels awaited military reinforcements from Venezuela.

The Conservative government, however, was not idle while this was occurring. They prepared a military force to be sent to Bucaramanga, the capital of Santander. The force never arrived, however, because the troops refused to accept payment by "tickets", which the government had to use due to the dire economic situation. No one expected, or was prepared for, a war that would last three years and would result in disaster to the country. With time, the war spread to every part of Colombia.

Conservative troops during the Thousand Days.

The first Liberal defeats came early during the war, with the Conservative victory at the Battle of Magdalena River on October 24. However, the Conservatives were in a delicate situation as well. The Conservatives had split into two factions, the Historical and National, in a frenetic attempt to bring order to the country. First, they dismissed President Sanclemente and replaced him with Jose Manuel Marroquin. In response, the Liberals nominated Gabriel Vargas Santos for the presidency.

The battles of Peralonso and Palonegro (in Santander) caused substantial damage. At Peralonso, the Liberals achieved victory by the direction of Rafael Uribe Uribe. At Palonegro (May 26, 1900) the Conservatives halted the enemy in what was an extraordinarily bloody encounter.

Beginning of the End 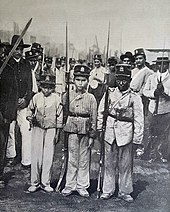 After Palonegro, the Liberals were divided into two different factions, this time pacifists and the warmongers. The Nationals of the Conservatives believed it was time to end the war, which by this time was mainly in the province of Panama and on the coast of the Caribbean Sea.

With that decision, internationalization of the war was avoided, though internationalization was promoted by Venezuelan president Cipriano Castro (who recognized Uribe Uribe as President of Colombia). Conservative troops commanded by Marroquín managed to reduce Venezuelan aid to the Liberals on 29 July 1901 during the Battle of San Cristóbal, who at this time were suffering defeats by the Conservative General Juan B. Tovar.

President Castro of Venezuela was the driving force of the war in late-1901, eventually pushing its continuation into 1902.[4] In September 1901, Castro deployed 1,200 Venezuelan troops along with canons, rifles and a machine gun into Colombia, with Venezuelans comprising a large portion of Liberal troops in border area.[5] During the Battle of Riohacha, Castro sent a gunboat to block Conservative reinforcements from entering the city's harbor and order Venezuelan general José Antonio Dávila to manage Venezuelan troops alongside the Liberals.[5] Errors by Venezuelan forces resulted with Colombian reinforcements landing near Riohacha and countering the joint Liberal-Venezuelan forces, resulting in a mass retreat and a victory for the Colombian army.[5]

Eventually, General Uribe saw that the Liberals would not be able to defeat the Conservatives, and therefore was inclined to surrender, albeit with certain conditions.

Treaties of Neerlandia and Wisconsin

The peace treaty was signed on the plantation Neerlandia on October 24, 1902, the fighting ended mid that year in Panama. From late 1901, fighting occurred between the ships Admiral Padilla (Liberal) and the Lautaro (Chilean property, lent to the conservatives), the latter of which was defeated in front of City of Panama on January 20, 1902.

Later the threat was from the American navy, sent by the government of Theodore Roosevelt to protect the United States' future interests in the construction of the Panama Canal. The Liberals commanded by general Benjamin Herrera were then forced to surrender. The subsequent assassination of Victoriano Lorenzo is understood among indigenous Panamanians as the loss of their struggle for land rights.[6]

Signing of the Treaty of Wisconsin

The definitive peace treaty was signed on the American battleship Wisconsin on November 21, 1902. The Liberals were represented by general Lucas Caballero Barrera, who was in charge of the united army of Cauca and Panama, and Colonel Eusebio A. Morales, who was representing general Benjamin Herrera. The Conservatives were represented by general Víctor M. Salazar, governor of the department of Panama, and general Alfredo Vázquez Cobo, chief of staff of the Conservative army on the Atlantic Coast, the Pacific, and Panama. Together, representing the entire government, they signed the end of the war.