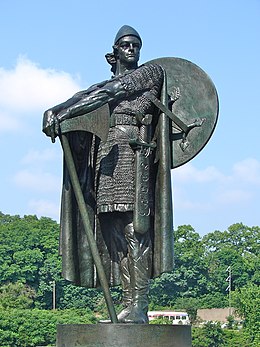 Statue of Thorfinn Karlsefni by Einar Jónsson in Philadelphia

Thorfinn Karlsefni (Old Norse: Þorfinnr karlsefni Þórðarson, Icelandic: Þorfinnur karlsefni Þórðarson) was an Icelandic explorer. Around the year 1010 AD, he followed Leif Eriksson's route to Vinland, in a short-lived attempt to establish a permanent settlement there with his wife Guðríður Víðförla Þorbjarnardóttir and their followers.

The byname Karlsefni means "makings of a man" according to the preface of Magnus Magnusson and Hermann Pálsson,[1] although the Cleasby-Vigfusson dictionary glosses it as "a thorough man",[2] elaborated elsewhere as a "real man", a "sterling man".[3]

Thorfinn's expeditions are documented in the Grœnlendinga saga ("Saga of the Greenlanders" henceforth Grl.) and Eiríks saga rauða ("Saga of Eirik the Red" Henceforth Eir.),[a] which together are referred to as "The Vinland Sagas",[4] but the details are at considerable variance (See under #Saga sources).[5]

Thorfinn Karlsefni met in Greenland Gudrid Thorbjarnardóttir (Guðríðr Þorbjarnardóttir), widow of Thorstein Eiriksson and wedded her.[6] She had been staying under the care of her brother-in-law Leif Eriksson, at Brattahlíð the estate left to Leif by Eirik the Red, who was dead by this point, having succumbed to an epidemic ca. 1003, even though Eir. has him still alive and playing host to her.[7]

Thorfinn reached the momentous decision to go to Vinland (ON and Icelandic Vínland), which according to Grl. happened at the insistence of Gudrid. And Leif agreed to lend the houses he built in Vinland, though unwilling to make a free gift of it.[6] Among the other settlers into Vinland was Freydis, the sister or half-sister of Leif Eriksson, who may have accompanied Karlsefni's voyage (Eir.) or headed an expedition of her own that ended in carnage (Grl.).

According to Grl., Karlsefni left with 60 men and 5 women, trailing the path taken by Leif and Thorvald Eiriksson. Whereas in Eir. he took three ships with 140 men aboard, describing the voyage in greater detail.[8][b]

Gudrid bore Thorfinn a boy in Vinland, who was named Snorri,[9][10] the first child of European descent known to have been born in the New World and to whom many Icelanders can trace their roots. The exact location of Thorfinn's colony is unknown but is believed to potentially be the excavated Norse camp at L'Anse aux Meadows, Newfoundland.

It has been pointed out that Eiríks saga rauða (Eir.) distorts the facts by giving undue credit to Thorfinn.[11]

For instance, it denies that Thorvald Eiriksson ever led his own voyage to reach Vinland (as Grl. records), even before Thorfinn. Although Thorvald had met his death by Native American arrows in Vinland before Karlsefni embarked, Eir. postponed Thorvald's death so he can be made to accompany Karlsefni to Vinland,[12] ultimately to suffer a more fantastical death from a shot fired by a Uniped.[13] Eir. shifts over to Karlsefni the credit for naming numerous bits of geographic features, from Helluland and Markland to Kjalarnes "Keel Ness", though "this flatly contradicts the Grœnlendinga saga and is assuredly wrong".[14] Helluland (Baffin Island) and Markland were named by Leif; Kjalarness was where Thorvald had wrecked his ship, and the keel was left to stand as a monument,[15] and not an anonymous shipwreck as Eir. puts it.

According to the Grœnlendinga saga, Thorfinn Karlsefni's expedition commenced after his marriage to Gudrid Thorbjarnardóttir. This marriage to Gudrid was predicted earlier in the saga by Gudrid's first husband Thorstein Eriksson, upon his death.[c] The expedition brought women and livestock, signifying that they planned on being settled in the area for a while. Along the voyage they ate a beached whale. They also cut timber, harvested grapes, and caught fish and game. A bull they brought frightened the native people (Skraelings). They tried to appease the natives by offering milk, but the natives took ill and battles commenced. Guðríðr Þorbjarnardóttir gave birth to Thorfinn Karlsefini’s son Snorri before they head back to Greenland.

Eirik the Red's Saga depicts Thorfinn Karlsefni as a successful merchant from Reynines, Skagafjord, in the north of Iceland. Karlsefni embarks on a trading expedition with forty men, and arrive at Brattahlid, Greenland where they are hosted by Eirik the Red. Karlsefni marries Gudrid that winter. Karlsefni departs with three ships and 140 men in search of Vinland. Karlsefni's expedition winter on a piece of land, where two scouting slaves found grapes and wild grain. Eating a beached whale causes illness, as well as a rift. Thorhall's group declared the whale to be a boon from Thor, offending the Christian members and they part ways.

Karlsefni's expedition discovers further south a bountiful area full of wheat, fish, and game. They attempt contact with the natives who travel in hide-covered boats. The natives leave and the Greenlanders winter there, where their livestock flourish. The following spring, the expedition reencounter the natives and engage in trade with them, until a bull breaks free and frightens away the natives. The native return after three weeks with hostile intent, a skirmish ensues, and the Greenlanders attempt as best they can to flee into the forest. Karlsefni and his men are saved by Freydis, who scares the natives off by slapping her bare breast with a sword taken from one of the fallen Greenlanders.

The expedition heads back north, and Karlsefni searches for Thorhall in vain. Karlsefni's men encounter the one-legged creature that is said to have shot Thorvald Eiriksson dead with an arrow. Karlsefni's son Snorri is born in the New World. But they eventually leave, and after spending time in Greenland to Eirik the Red, Karlsefni and Gudrid return to Karlsefni's farm at Reynines, in Iceland.

Thorfinn Karlsefni's father was Thord Horsehead (Þórðr hesthöfði Snorrason),[6][18] and his mother was named Thorunn (Þórunn).[18] Thord Horsehead was son of Snorri, son of Thord of Hofdi [is].[6]

Thorfinn was presumably raised at his father's estate called Stad (Stað) in Reyniness (Reynistaður [is]).[18] This estate was located in the Skagafjord bay area,[18] which is also where Thorfinn's great-grandfather established roots, at his farm of Hofdi [is] in Hofdastrand [is].[d] Thorfinn himself also retired in the area in his later years; while Eiríks saga says "he went (back) to his farm in Reyniness,"[19] Grænlendinga saga states he bought new lands at Glaumby [is].[6]

A more detailed genealogy (under Eiríks saga rauða, ch. 7) is interpolated in the H or Hauksbók text of Haukr Erlendsson. Haukr had particular interest since he himself claimed descent from Thorfinn.[11] However, Haukr's ancestral trace before Karlsefni's great-grandfather Thord of Hofdi deviates from other sources, and the Landnámabók version[17] is deemed more reliably accurate.[16]

Though not shown in the family tree (right), Thorfinn also claims descent from the matriarch Aud the Deep-Minded through Thord Gellir.[20]

In the early twentieth century, Icelandic sculptor Einar Jónsson was commissioned by Joseph Bunford Samuel to create a statue of Thorfinn Karlsefni through a bequest that his wife, Ellen Phillips Samuel, made to the Fairmount Park Art Association (of Philadelphia, now the Association for Public Art).[21] Her bequest specified that the funds were to be used to create a series of sculptures "emblematic of the history of America." Thorfinn Karlsefni (1915–1918) was installed along Philadelphia's Kelly Drive near the Samuel Memorial and unveiled on November 20, 1920.[22][23] There is another casting of the statue in Reykjavík, Iceland.

As reported on October 1, 2018, vandals did severe damage to the statue. They toppled the statue and then dragged it into the near-by Schuylkill River.[24] "It appeared the statue was pulled off its massive stone base, which measures 12-by-12 feet wide. Bits of stone were scattered across drag marks on the ground and the bronze could be seen bubbling underwater in the river." - NBC Philadelphia[25]

The 1967 comedic science fiction novel The Technicolor Time Machine by Harry Harrison reveals at its ending that the character named Ottar—an 11th-century Viking hired by a film studio as consultant and actor—is indeed Thorfinn Karlsefni.

A fictionalized version of Thorfinn Karlsefni is the protagonist of the Japanese Manga series Vinland Saga by author Makoto Yukimura. The popular manga also received a 24-episode anime television series adaptation by Wit Studio which aired on NHK General TV in Japan from July to December 2019 and released worldwide on Prime Video.[26]