Cross Lake First Nation Division No. 22, Manitoba List of cities in Manitoba
This article is about the city. For the rural municipality, see Rural Municipality of Thompson.
City in Manitoba, Canada

Thompson (population 13,678) is the largest city in the Northern Region of Manitoba and is situated along the Burntwood River, 761 kilometers (473 miles) north of Winnipeg. Originally founded in 1956 as a mining town, Thompson now primarily serves as the "Hub of the North", providing goods and services (e.g., healthcare, retail trade) to the surrounding communities.

Thompson's trade area is larger than New Mexico yet contains just over 50,000 residents, with many of the smaller communities accessible only by air or winter road. Despite Thompson's isolated location in the heart of Canada's boreal forest, Thompson is directly connected to Winnipeg via paved highway, railroad (VIA Rail), and Thompson Airport. Thompson also has modern amenities (e.g., fiber optic internet) and a large retail scene, including half a dozen shopping malls and several large chain stores (e.g., Wal-Mart, Giant Tiger, Safeway, Shoppers Drug Mart, Canadian Tire).

Thompson's natural and undisturbed surroundings makes it a popular community with outdoor enthusiasts:[5] the largest marina in Manitoba ("the land of 100,000 lakes") is located just 38 km (24 mi) south in Paint Lake Provincial Park, hundreds of kilometers of snowmobile trails are maintained by the Thompson Trailbreakers, and the lack of light pollution and Thompson's northern latitude allows for occasional viewing of the northern lights (even within the city limits).

The Thompson area was first inhabited by nomadic Paleo-Indian hunters around 6000 BC, sometime after the collapse of the Laurentide Ice Sheet.

For a 10-year period beginning in 1946, Inco Limited explored northern Manitoba for nickel deposits; on February 4, 1956, a major ore body was discovered, and the modern history of Thompson began.[6]

Thompson, named after Inco's chairman at the time, Dr. John F. Thompson (1881 - 1968),[7] was founded following the December 3, 1956 agreement between the Government of Manitoba and Inco Limited. On March 25, 1961, Inco formally opened the first integrated nickel mining-smelting-refining plant in the Western Hemisphere (in Thompson) and the second largest nickel-producing operation in the world (after Inco's Sudbury operations).[6]

Thompson was incorporated as a town in 1967 on Canada's Centennial Anniversary; in 1970 Thompson gained city status in the royal presence of Queen Elizabeth II.[8]

Thompson's rapid boom and bust was attributed to changes in the nickel market; during the 1960s, following large increases in the demand for nickel, 6 additional mines (Birchtree, Soab North, Soab South, Pipe Number 1, Pipe Number 2, and Pipe Open Pit) were constructed near Thompson.[10] After the Soviet Union gained access to the world nickel market in 1970, world supply of nickel exceeded world demand;[8] in response, four nickel mines (Soab North, Soab South, Pipe Number 1, and Pipe Number 2) were closed in 1971 and 30% of Inco's workforce in Thompson was laid off.[11] In 1977, when nickel prices declined substantially, a fifth mine (Birchtree) was put on care and maintenance and an additional 650 Inco employees in Thompson were laid off.[8]

As Inco's workforce dwindled from over 4000 in the 1970s[12] to around 850 in 2018,[13] the economic driver of Thompson shifted to providing goods and services (e.g., retail, healthcare, social services) to the surrounding communities, earning Thompson the nickname, "The Hub of the North". 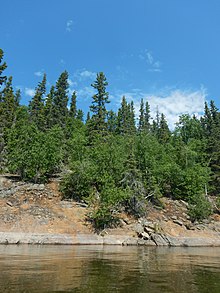 The soil on the Canadian Shield is relatively shallow but still supports large trees; rocky outcrops can be commonly found around Thompson, especially near lakes and rivers.

Thompson covers an area of 20.79 square kilometers (8.03 square miles) and is located on the Precambrian Canadian Shield.

The city is surrounded by boreal forest and bordered on the west and north by the Burntwood River.

Thompson is located on the border of plant hardiness zones 1a and 1b, making outdoor commercial agriculture impossible; for comparison, Winnipeg is located within zone 4a. 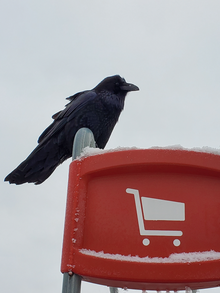 A large raven sitting on a shopping-cart-return-rack. Taken in Thompson, Manitoba, near the City Centre Mall (containing a Wal-Mart and a Safeway), where a large number of ravens gather every day.

Beavers (Castor canadensis) are ubiquitous around Thompson, with a few residing in the city limits. Red foxes (Vulpes vulpes) can also be found in Thompson. Black bears (Ursus americanus), and less commonly, wolves (Canis lupus), are occasionally spotted on the fringes of town. Moose (Alces alces) and herds of boreal woodland caribou (Rangifer tarandus caribou) can also occasionally be seen near Thompson. Rarely seen predators outside of Thompson include the marten (Martes americana), the wolverine (Gulo gulo), and the lynx (Lynx canadensis). 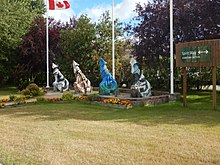 Start of the downtown section of Spirit Way, with 4 of the 56 Spirit Way Wolf statues.

The Millennium Trail is a 15 km (9.3 mi) hike and bike loop around the city with sections that pass through the boreal forest. The crushed rock trail is open year-round to non-motorized travel. Walking, hiking and mountain biking are popular in the summer while walking and cross country skiing are winter favourites. 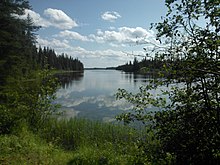 Nickel Days is a large weekend festival held in June every year; the festival includes concerts, family games, a parade, and more.

Winterfest is an annual multi-day celebration of northern culture and activities that is held in February.

Thompson is home to the Norman Northstars hockey team, who play in the Manitoba U-18 'AAA' Hockey League. Thompson's minor hockey teams are known as the King Miners. The high school teams are called the RD Parker Collegiate Trojans. The Trojans' rivals are the Hapnot Kopper Kings from Flin Flon and the MBCI Spartans from The Pas.

Every year in April, students from the six elementary schools in grades 3-8 compete in the Knights of Columbus Track Meet. Juniper School dominated KoC in the 1990s, and Westwood School has had a winning streak during the 2000s (decade).

The Thompson Citizen (covering Thompson) and the Nickel Belt News (covering the area around Thompson) are the only local newspapers. 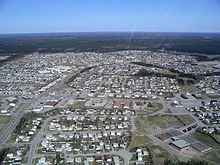 City of Thompson, looking West. The Burntwood River is visible at the edge of town.

As is common in resource-based communities, Thompson has experienced above-average employment income and significant swings in mining-sector employment throughout its history.

As of the 2016 Census, Thompson had 7065 employed persons, with the five largest sectors of the economy being:[18]

View of Thompson's mining operations. The (now decommissioned) smelter and refinery is visible in the middle of the image.

Vale Limited is the owner and operator of Thompson's mining operations, which involves the mining, milling, and concentrating of nickel; the concentrated nickel slurry is then shipped (for final processing) to Vale Limited's operations in Long Harbour and Sudbury.

Despite the fact that Vale Limited's placed their nearby Birchtree Mine on care and maintenance (suspending nickel extraction at the mine for the time being), Thompson may be particularly well positioned for future growth in nickel mining industry: Vale recently invested over $100 million in the concentrate load out facility and Vale's North Atlantic mining operations director recently stated that, "If you were to look across the world for an area that had nickel that could be invested in on a standalone nickel basis, there isn’t a better place [than Thompson]".[22]

Addictions Foundation of Manitoba also has a facility located in Thompson.

Thompson has eight hotels, including Best Western, Days Inn, and Quality Inn, which have over 600 beds (total).

There are over 20 restaurants in Thompson including Boston Pizza, Pizza Hut, KFC, and McDonald's.

The School District of Mystery Lake, based in Thompson, provides K-12 education through six primary schools and one secondary school; the Franco-Manitoban School Division also operates one school for K-8.

The University College of the North and the University of Manitoba's "Northern Social Work Program" provides post-secondary education centered around nursing, social work, and the trades.

The Frontier School Division, the largest school division in Canada by geographical area, has an Area Office in Thompson.

Thompson's retail trade is centered mostly in several malls, such as:

A Noorduyn Norseman attached to a display stand. Bush planes provide short-haul transport to the many lakes in the region.

The city is served by Thompson Airport, which is the 3rd busiest airport in Manitoba and provides Thompson with several hundred jobs.

MDS Aerotest currently operates a cold weather testing centre just south of Thompson, as part of a joint venture between Pratt & Whitney Canada and Rolls-Royce. Thompson was selected from an initial list of 150 candidate communities due to the area's ideal testing conditions and urban amenities.[23]

In 2016, Thompson has the highest percentage of its population as Aboriginal (43.5%) out of all 152 cities (census metropolitan areas and census agglomerations) in Canada.[24]

The median age in Thompson is 30.8 years old, significantly below Canada's median age of 41.0.

For Thompson residents ages 25 to 34, 17.5% have not obtained a high-school diploma or equivalent, compared to 8.7% for Canada. 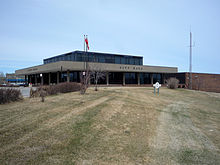 The City of Thompson is governed by a city council consisting of 9 members: a mayor (head of council) and eight councillors; the structure and size of the municipal government is stipulated by The Thompson Charter Act. Elections are held every four years (in October) and members of city council serve four-year terms (without term limits).

As of 2018, the City of Thompson has eight standing committees, each composed of two or three members of the council, private citizens, and business/government representatives.[28]

To calculate the actual Crime Severity Index, the number of police-reported incidents for each offence is multiplied by the weight for that offence. All weighted offences are then added together and divided by the corresponding population total. Finally, to make the Index easier to interpret, the Index is standardized to "100" for Canada (a system that is similar to the Consumer Price Index), using 2006 as a base year.

For hub cities (e.g., Thompson), the Crime Severity Index likely over-represents the dangers of crime to the regular citizen. In 2018, the RCMP officer in charge of Thompson, Kevin Lewis, stated, "... Thompson is the hub of Northern Manitoba, which makes it a desirable place for drug trafficking, and other nefarious activities. This is a common theme for hub cities across Canada. Our proactive drug enforcement also provides an increase in the CSI, as cocaine trafficking is weighted heavily on the CSI. Disturbing the peace is similar to mischief where intoxication occurs in a public place, resulting in many violations due to the downtown core, again weighing heavily on our score." Lewis also stated, "... Many of our mischiefs are related to intoxicated persons in a private residence or hotel room, but can also be used to capture damage to property. The mischief rate is high and when the weight is applied, it provides a high ratio for our CSI score.”[30]

Thompson is unique in being the judicial centre for a huge geographic area - ranging from Norway House in the South to Churchill in the North. The Thompson Judicial district covers 15 circuits and offers both Judicial Justice of the Peace Court as well as Provincial Court sittings. Judges, Judicial Justices of the Peace, Clerks, Crown Attorneys and defence lawyers based in Thompson and Winnipeg regularly travel by small plane on circuit court to various remote communities and First Nation Communities to hold Provincial court.

Since September 2009, the Franco-Manitoban School Division (DSFM) has expanded within Manitoba to include one K-8 elementary school in Thompson, École Communautaire La Voie du Nord. Located on Weir Road near the site of the Norplex Pool Recreation Centre, the district allows children to receive instruction in French with peers in a Francophone culture.[31]

Thompson is home to one of the two main campuses of the University College of the North, as well as the University of Manitoba's Faculty of Social Work branch in the region.