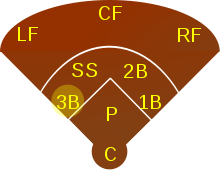 The position of the third baseman

A third baseman, abbreviated 3B, is the player in baseball or softball whose responsibility is to defend the area nearest to third base — the third of four bases a baserunner must touch in succession to score a run. In the scoring system used to record defensive plays, the third baseman is assigned the number '5'.

Third base is known as the "hot corner", because the third baseman is relatively close to the batter and most right-handed hitters tend to hit the ball hard in this direction. A third baseman must possess good hand-eye coordination and quick reactions in order to catch hard line drives sometimes in excess of 125 miles per hour (201 km/h).[1] Third basemen often must begin in a position even closer to the batter if a bunt is expected, creating a hazard if the ball is instead hit sharply. As with middle infielders, right-handed throwing players are standard at the position because they do not need to turn their body before throwing across the infield to first base. Mike Squires, who played fourteen games at third base in 1982 and 1983, is a very rare example of a third baseman who threw lefty.[2][3] Some third basemen have been converted from middle infielders or outfielders because the position does not require them to run as fast.

Expectations of how well a third baseman should be able to hit have varied a great deal over time; in the early years of the sport, these expectations were similar to those for shortstops, the third baseman being merely the less skilled defensive player. Players who could hit with more ability often were not suited for third base, either because they were left-handed or because they were not mobile enough for the position. However, the beginning of the live-ball era in the 1920s created a greater demand for more offense, and third basemen have since been expected to hit either for a high average (.290 or better) or with moderate to substantial power. Since the 1950s the position has become more of a power position with sluggers such as Eddie Mathews, Mike Schmidt and Ron Santo becoming stars.

There are fewer third basemen in the Baseball Hall of Fame than there are Hall of Famers of any other position. Furthermore, with the notable exception of John McGraw and Bobby Cox, few third basemen have gone on to have successful managing careers, with Jimmy Dykes and Negro Leaguer Dave Malarcher being perhaps the next most prominent managers who began their careers at third base. 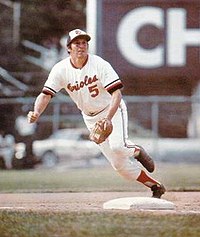 Brooks Robinson played more games at third base than any other player in MLB history.