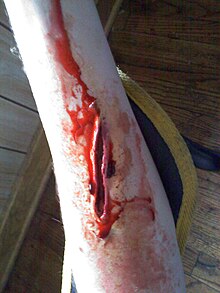 Fake blood on a human arm

Theatrical blood, stage blood or fake blood is anything used as a substitute for blood in a theatrical or cinematic performance. For example, in the special effects industry, when a director needs to simulate an actor being shot or cut, a wide variety of chemicals and natural products can be used. The most common is red food coloring, often inside small balloons coupled with explosive devices called squibs. However, Alfred Hitchcock used Bosco Chocolate Syrup as fake blood in his 1960 thriller Psycho.[1] Since the film was in black and white, the color was less important than the consistency. Tomato ketchup is also a common alternative.

There are many reasons for substituting for real blood in the film industry, such as ethical and sanitary concerns, and concerns for the emotional well being of the actors. Also, actual blood's tendency to coagulate and solidify quickly make it unsuitable for repeated takes without freshening; the longer-lasting viscosity of stage blood makes it far easier to work with on the set.

"Kensington Gore" (a pun on the London place and street) was a trademark for fake blood used in films and in theatre. It was manufactured by a retired British pharmacist, John Tinegate or Tynegate, during the 1960s and 1970s, in the village of Abbotsbury, Dorset. Many varieties of blood, having various degrees of viscosity, shades and textures, were available. Since Tinegate's death, the name "Kensington Gore" has become a generic term for stage blood.[2][3] Kensington Gore was used in the film The Shining.[citation needed]

Theatrical blood has other applications apart from its use in the film industry.

The art of moulage uses theatrical blood in applying mock injuries for the purpose of training emergency response teams and other medical and military personnel.