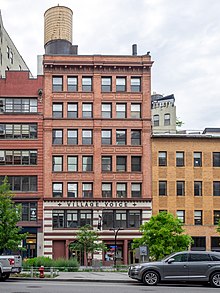 The Cooper Square offices of the paper

The Village Voice was an American news and culture paper, known for being the country's first alternative newsweekly. Founded in 1955 by Dan Wolf, Ed Fancher, John Wilcock, and Norman Mailer, the Voice began as a platform for the creative community of New York City. While it ceased publication in 2017 and stopped generating online content in 2018, its archives are still accessible online.

In October 2015, The Village Voice changed ownership and severed all ties with former parent company Voice Media Group (VMG).[2] The Voice announced on August 22, 2017, that it would cease publication of its print edition and convert to a fully digital venture, on a date to be announced.[3] The final printed edition, featuring a 1965 photo of Bob Dylan on the cover, was distributed on September 21, 2017.[4] After halting print publication in 2017, the Voice provided daily coverage through its website until August 31, 2018, when it announced it was ceasing production of new editorial content.[5] The Voice continues to have an active website, which features archival material related to current events. 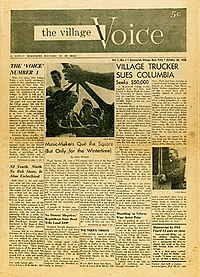 Cover of the October 1955 issue

The Village Voice was launched by Ed Fancher, Dan Wolf, and Norman Mailer[6] on October 26, 1955, from a two-bedroom apartment in Greenwich Village; that was its initial coverage area, which expanded to other parts of the city by the 1960s. In 1960, it moved from 22 Greenwich Avenue to 61 Christopher Street in a landmark triangular corner building adjoining Sheridan Square, and a few feet west of the Stonewall Inn;[7] then, from the 1970s through 1980, at 11th Street and University Place; and then Broadway and 13th Street. It moved to Cooper Square in the East Village in 1991, and in 2013, to the Financial District.[8]

Early columnists of the 1950s and 1960s included Jonas Mekas, who explored the underground film movement in his "Film Journal" column; Linda Solomon, who reviewed the Village club scene in the "Riffs" column; and Sam Julty, who wrote a popular column on car ownership and maintenance. John Wilcock wrote a column every week for the paper's first ten years. Another regular from that period was the cartoonist Kin Platt, who did weekly theatrical caricatures. Other prominent regulars have included Peter Schjeldahl, Ellen Willis, Jill Johnston, Tom Carson, and Richard Goldstein.

For more than 40 years, Wayne Barrett was the newspaper's muckraker, covering New York real estate developers and politicians, including Donald Trump. The material has become a valuable resource for reporters covering the president today.[5]

The Voice has published investigations of New York City politics, as well as reporting on national politics, with arts, culture, music, dance, film, and theater reviews. Writers for the Voice have received three Pulitzer Prizes: in 1981 (Teresa Carpenter),[9] 1986 (Jules Feiffer)[10] and 2000 (Mark Schoofs).[11] The paper has, almost since its inception, recognized alternative theater in New York through its Obie Awards.[12] The paper's "Pazz & Jop" music poll, started by Robert Christgau in the early 1970s, is released annually and remains an influential survey of the nation's music critics. In 1999, film critic J. Hoberman and film section editor Dennis Lim began a similar Village Voice Film Poll for the year in film. In 2001, the Voice sponsored its first music festival, Siren Festival, a free annual event every summer held at Coney Island. The event moved to the lower tip of Manhattan in 2011, and was re-christened the "4knots Music Festival", a reference to the speed of the East River's current.[13]

The Voice was known for its staunch support for gay rights, and it published an annual Gay Pride issue every June. However, early in its history, the newspaper had a reputation as having a homophobic slant. While reporting on the Stonewall riots of 1969, the newspaper referred to the riots as "The Great Faggot Rebellion".[14] Two reporters, Howard Smith and Lucian Truscott IV, both used the words "faggot" and "dyke" in their articles about the riots. (These words were not commonly used by homosexuals to refer to each other at this time.) Smith and Truscott retrieved their press cards from the Voice offices, which were very close to the bar, as the trouble began; they were among the first journalists to record the event, Smith being trapped inside the bar with the police, and Truscott reporting from the street.[15] After the riot, the Gay Liberation Front (GLF) attempted to promote dances for gays and lesbians in the Voice, but were not allowed to use the words "gay" or "homosexual", which the newspaper considered derogatory. The newspaper changed its policy after the GLF petitioned it to do so.[16] Over time, the Voice changed its stance, and, in 1982, became the second organization in the US known to have extended domestic partner benefits. Jeff Weinstein, an employee of the paper and shop steward for the publishing local of District 65 UAW, negotiated and won agreement in the union contract to extend health, life insurance, and disability benefits to the "spouse equivalents" of its union members.[17]

In 1996, after decades of carrying a cover price, the Voice switched from a paid weekly to a free, alternative weekly. The Voice website was a recipient of the National Press Foundation’s Online Journalism Award in 2001[19] and the Editor & Publisher EPpy Award for Best Overall U.S. Newspaper Online Service – Weekly, Community, Alternative & Free in 2003.[20]

After The Village Voice was acquired by New Times Media in 2005, the publication's key personnel changed. The Voice was then managed by two journalists from Phoenix, Arizona.

The sacking of Nat Hentoff, who worked for the paper from 1958 to 2008, led to further criticism of the management by some of its current writers, Hentoff himself, and by the Voice's ideological rival paper National Review, which referred to Hentoff as a "treasure".[23][24] At the end of 2011, Wayne Barrett, who had written for the paper since 1973, was laid off. Fellow muckraking investigative reporter Tom Robbins then resigned in solidarity.[25]

In May 2013, The Village Voice editor Will Bourne and deputy editor Jessica Lustig told The New York Times that they were quitting the paper rather than executing further staff layoffs.[27] Both had been recent appointments. By then, the Voice had employed five editors since 2005. Following Bourne's and Lustig's departure, Village Media Group management fired three of the Voice's longest-serving contributors: gossip and nightlife columnist Michael Musto, restaurant critic Robert Sietsema, and theater critic Michael Feingold, all of whom had been writing for the paper for decades.[28][29][30] Feingold was rehired as a writer for The Village Voice in January 2016.[31]

Peter Barbey, through the privately owned investment company Black Walnut Holdings LLC, purchased The Village Voice from Voice Media Group in October 2015.[33] Barbey is a member of one of America's wealthiest families.[34] The family has had ownership interest in the Reading Eagle, a daily newspaper serving the city of Reading, Pennsylvania and the surrounding region, for many years. Barbey serves as president and CEO of the Reading Eagle Company, and holds the same roles at The Village Voice. After taking over ownership of the Voice, Barbey named Joe Levy, formerly of Rolling Stone, as interim editor in chief,[35] and Suzan Gursoy, formerly of Ad Week, as publisher.[36] In December 2016, Barbey named Stephen Mooallem, formerly of Harper's Bazaar, as editor in chief.[37] Mooallem resigned in May 2018, and was not replaced before the publication's shutdown.[5]

Under the Barbey ownership, advertisements for escort agencies and phone sex services came to an end.[5]

On August 31, 2018, it was announced that the Village Voice would cease production and lay off half of its staff. The remaining staff would be kept on for a limited period for archival projects.[38][39][40] The last news article published was an August 31 piece by freelancer Steven Wishnia about tenants returning to their building after safety concerns had prompted its evacuation.[5] Two weeks after the Village Voice ceased operations on September 13, co-founder John Wilcock died in California at the age of 91.

Although The Village Voice announced in August 2018 that it would cease publication, its website, along with its Twitter and Facebook accounts, is still active and running in 2020.[41]

The newspaper has also been a host to underground cartoonists. In addition to mainstay Jules Feiffer, whose cartoon ran for decades in the paper until its cancellation in 1996, well-known cartoonists featured in the paper have included R. Crumb, Matt Groening, Lynda Barry, Stan Mack, Mark Alan Stamaty, Ted Rall, Tom Tomorrow, Ward Sutton, Ruben Bolling and M. Wartella.

Backpage, a classified advertisement website owned by the same parent company as The Village Voice, was used as a hub for sex trafficking of both adults and minors. In 2012, Nicholas Kristof wrote an article in The New York Times detailing a young woman's account of being sold on Backpage.[42] The Village Voice released an article entitled "What Nick Kristof Got Wrong" accusing Kristof of fabricating the story and ignoring journalistic standards. [43] Kristof responded, noting that the Voice did not dispute the column, but rather tried to show how the timeline in Kristof's original piece was inaccurate. In this rebuttal, he not only justified his original timeline, but expressed sadness "to see Village Voice Media become a major player in sex trafficking, and to see it use its journalists as attack dogs for those who threaten its corporate interests", noting another instance of The Village Voice attacking journalists reporting on Backpage's role in sex trafficking.[44]

After repeated calls for a boycott of The Village Voice, the company was sold to Voice Media Group.[45]