The Streets of San Francisco

The Streets of San Francisco is a 1970s television crime drama filmed on location in San Francisco, California, and produced by Quinn Martin Productions, with the first season produced in association with Warner Bros. Television (QM produced the show on its own for the remainder of its run).

It starred Karl Malden and Michael Douglas as two homicide Inspectors in San Francisco. The show ran for five seasons, between 1972 and 1977, on ABC, amassing a total of 119 60-minute episodes.[2] Douglas left the series at the start of its final season, and was replaced by Richard Hatch.

The series started with a pilot movie of the same title (based on the 1972 detective novel Poor, Poor Ophelia[3][4] by Carolyn Weston) a week before the series debuted. Edward Hume, who wrote the teleplay for the pilot, was credited as having developed the series based on characters in Weston's novel. The pilot featured guest stars Robert Wagner, Tom Bosley, and Kim Darby.

Malden (right) as Mike Stone, with David Wayne as Wally Sensibaugh in "In the Midst of Strangers" (Season 1, Episode 8)

The Streets of San Francisco debuted on ABC on Saturday, September 16, 1972, at 9 pm Eastern, competing against two popular CBS sitcoms, The Mary Tyler Moore Show and The Bob Newhart Show. After Streets gained attention on Saturday nights during the first season, the show was moved to Thursday, where it stayed for the remainder of its run, beginning with the second season, competing against other successful 1970s crime dramas, in different timeslots.

By all accounts, Malden and Douglas developed a strong professional and personal relationship from their time on the series. Twenty years after last working together on an episode, they were both onstage at the 1996 People's Choice Awards. Malden referred to Douglas as "the son I never had" and mentioned that he had wanted producer Quinn Martin to cast Douglas on the series. Douglas responded to the compliment by calling Malden "my mentor", and both also expressed that they enjoyed working together on the show. 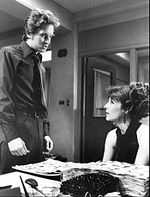 Douglas (left) as Steve Keller, with Janice Rule as Beverly Landau in "The First Day of Forever" (season one, episode two)

The show revolved around two police officers who investigated homicides in San Francisco. The center of the series was a veteran cop and widower, Lt. Michael Stone, star #897 (played by Malden), who had more than 20 years of police experience and was now assigned to the homicide detail of SFPD's Bureau of Inspectors. He was partnered with a young inspector and energetic partner, Assistant Inspector Steve Keller, star #2248 (played by Douglas), a college graduate, aged 28, who had little experience on the police force. Stone would become a second father to Keller as he learned the rigors and procedures of detective work. Eventually, Keller was promoted to full inspector. As the series went on, Douglas became a star in his own right. Mike's daughter, Jeannie Stone (Darleen Carr), made occasional appearances.

After the second episode of the fifth and final season, Douglas left the show after successfully producing the film One Flew Over the Cuckoo's Nest, which won the Academy Award for Best Film for 1975.[2] He, in turn, also established a film career. His character's absence was explained by having him take a teaching position at UC Berkeley, a local college, while Lt. Stone was partnered with another Inspector, Inspector Dan Robbins (Hatch). Hatch started his career on the ABC soap All My Children and later went on to Battlestar Galactica. The change was not popular with audiences, and the show ended in 1977, due to declining ratings and increased production costs. Additionally in 1977, writer James J. Sweeney won an Edgar Award from the Mystery Writers of America for his teleplay for the season-four episode "Requiem for Murder".

When the series debuted, it was slotted as counter programming opposite CBS' popular Saturday-night situation comedies, but failed to build an audience. The two-hour pilot movie ranked 58 out of 65 programs telecast that week,[6] while the first regular episode of the series fared even lower at 62nd of 65 programs.[7] In January 1973, ABC shook up its lineup by shuffling a number of its programs around. The Streets of San Francisco moved to Thursday night, and immediately increased its viewership to an 18.1 rating and 31 percent share of the audience.[8] Over the next three years, the series flourished on Thursday, ranking number 22 for its second and third seasons and number 26 for its fourth. For the 1976-77 television season, ABC made the strategic error of moving the show up one hour, placing it in direct competition with Barnaby Jones, another Quinn Martin Production. The two crime dramas virtually split their audience with Barnaby Jones ranking 49th and The Streets of San Francisco falling to 52nd of 104 shows for the season.[9] The decline in viewership, coupled with steadily rising production costs and a new contract for star Karl Malden, prompted ABC to cancel the series.

In the United Kingdom, The Streets of San Francisco debuted on 19 November 1973.[where?]

Both Malden and Douglas spent time with SFPD Inspectors to lend an air of authenticity to the show. SFPD Inspectors took a liking to both Malden and Douglas, whom they characterized as "very fine fellows." Unlike subsequent generations of television production, the show made an effort to insinuate itself as seamlessly as possible into the fabric of the city. The series was filmed almost entirely on location in San Francisco. A warehouse converted to an interior scenes sound stage was located at the dead end of Kearny Street below Telegraph Hill, across from 1855 Kearny Street currently adjoined to 150 Chestnut Street, where it still stands today. In the series, the inspectors' unmarked Ford four-door sedan would respond to an emergency after placing a single-lamp revolving magnetic red light on the roof. This was contrary to authentic unmarked SFPD vehicles, which used a forward steady-burning red handheld spotlight (pursuant to California Vehicle Code section 25252), which hung by a hook to the top inside front windshield. The studio prop black-and-white marked SFPD radio cars were authentic-looking with one exception; in early episodes, the studio cars had twin two-lamp revolving roof-mounted red lights or two roof-mounted forward steady-burning red lights on opposite sides of the center four-lamp revolving red light, while authentic marked SFPD black-and-white radio car roof-mounted emergency lights had one forward steady-burning red light and one rear-facing flashing amber light on opposite sides of the center four-lamp revolving red light.

The series was sponsored by Ford Motor Company, and half of the vehicles shown were new Ford cars. In the early episodes, Keller and Stone drove a brown 1971 Ford Galaxie four-door sedan and the entire SFPD cruiser fleet consists of Ford Galaxies.

Main article: List of The Streets of San Francisco episodes

On January 27, 1992, a reunion TV movie, Back to the Streets of San Francisco, was aired. Douglas, by then a major Hollywood star, did not appear. However, Darleen Carr did return as Mike Stone's daughter Jeannie.

CBS DVD (distributed by Paramount) has released all five seasons of The Streets of San Francisco on DVD in Region 1, and the first two seasons in Region 4. All seasons have been released in two volume sets.

Paramount Home Entertainment has released the first two seasons of Streets of San Francisco on DVD in the UK.