Singapore Press Holdings ISBN (identifier) President of Singapore
Daily broadsheet newspaper based in Singapore
Not to be confused with New Straits Times, the Malaysian newspaper.

The Straits Times is an English-language daily broadsheet newspaper based in Singapore and currently owned by Singapore Press Holdings. The Sunday Times is its Sunday edition.[2] The newspaper was established on 15 July 1845 as The Straits Times and Singapore Journal of Commerce.[5][6] The print and digital editions of The Straits Times and The Sunday Times have a daily average circulation of 364,134 and 364,849 respectively in 2017, as audited by Audit Bureau of Circulations Singapore.[7] Myanmar and Brunei editions are published, with newsprint circulations of 5,000 and 2,500 respectively.[3][4]

The Straits Times was started by an Armenian, Catchick Moses.[8] Moses's friend, Martyrose Apcar, had intended to start a local paper, but met with financial difficulties. To fulfil his friend's dream, Moses took over and appointed Robert Carr Woods as editor. On 15 July 1845, The Straits Times was launched as an eight-page weekly, published at 7 Commercial Square using a hand-operated press. The subscription fee then was Sp.$1.75 per month. In September 1846, he sold the paper to Robert Woods because the press proved unprofitable to run.

On 20 February 1942, five days after the British had surrendered to the Japanese, The Straits Times became known as The Shonan Times and The Syonan Shimbun. This name change lasted until 5 September 1945, when Singapore returned to British rule.[9]:240

During the early days of Singaporean self-governance (before 1965), the paper had an uneasy relationship with some politicians, including the leaders of the People's Action Party.[10][11] Editors were warned that any reportage that may threaten the merger between Singapore and the Malayan Federation may result in subversion charges, and that they may be detained without trial under the Preservation of Public Security Ordinance Act.[12][13] 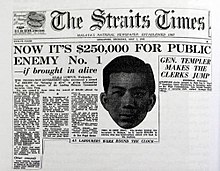 During the Malayan Emergency the Straits Times published cash bounties for information leading to the killing or capture of senior communists.[14]

The Straits Times functions with 16 bureaus and special correspondents in major cities worldwide. The paper has five sections: the main section consist of Asian and international news, with sub-sections of columns and editorials and the Forum Page (letters to the press). The Home section consist of local news and topics on Education for Monday, Mind and Body for Tuesday, Digital for Wednesday, Community for Thursday and Science for Friday. There are also a sports and finance section, a classified ads and job listing section and a lifestyle, style, entertainment and the arts section titled "Life!".

A separate edition The Sunday Times is published on Sundays.

A specific Myanmar and Brunei edition of this paper was launched on 25 Mar 2014 and 30 October 2014. It is published daily with local newspaper printers on licence with SPH. This paper is distributed on ministries, businesses, major hotels, airlines, bookshops and supermarkets on major cities and target sales to local and foreign businessmen in both countries. Circulation of the Myanmar edition currently stands at 5,000 and 2,500 for the Brunei edition. The Brunei edition is currently sold at B$1 per copy and an All-in-One Straits Times package consisting of the print edition and full digital access via online, tablets and smartphones, will also be introduced in Brunei.[3][4]

Launched on 1 January 1994, The Straits Times' website was free of charge and granted access to all the sections and articles found in the print edition. On 1 January 2005, the online version began requiring registration and after a short period became a paid-access-only site. Currently, only people who subscribe to the online edition can read all the articles on the Internet, including the frequently updated "Latest News" section.

A free section, featuring a selection of news stories, is currently available at the site. Regular podcast, vodcast and twice-daily—mid-day and evening updates—radio-news bulletins are also available for free online.

The Straits Times School Pocket Money Fund was initiated on October 1, 2000 by The Straits Times, to heighten public awareness of the plight of children from low-income families who were attending school without proper breakfast, or pocket money to sustain their day in school.[15] The aim is to alleviate the financial burden faced by parents in providing for their children's education. At the same time the funds will help children who are already facing difficulties in remaining in school to stay on.

The Straits Times Schools is a news desk created to encourage youth readership and interest in news and current affairs.[16] Launched in 2004, the programme was initially known as The Straits Times Media Club. Youth newspapers, IN and Little Red Dot are produced on a weekly basis for secondary and primary school students respectively, whose schools would have to subscribe in bulk.[17] Students will receive their papers every Monday together with the main broadsheet. On 7 March 2017, a digital IN app was launched, allowing parents, students and other individual ST subscribers to subscribe to IN weekly releases digitally.[18]

Chua Chin Hon, then ST’s bureau chief for the United States, was quoted as saying that SPH’s “editors have all been groomed as pro-government supporters and are careful to ensure that reporting of local events adheres closely to the official line” in a 2009 US diplomatic cable leaked by WikiLeaks.[24][25] Past chairpersons of Singapore Press Holdings have been civil or public servants. Current SPH Chairman Lee Boon Yang is a former PAP cabinet minister who took over from Tony Tan, former Deputy Prime Minister. Many current ST management and senior editors have close links to the government as well. SPH CEO Alan Chan was a former top civil servant and Principal Private Secretary of then Senior Minister Lee Kuan Yew. Current editor-in-chief Warren Fernandez was considered as a PAP candidate for the 2006 elections.[26][27]

In his memoir OB Markers: My Straits Times Story, former editor-in-chief Cheong Yip Seng recounts how, since 1986, there has been a government-appointed "monitor" at the newspaper, "someone who could watch to see if indeed the newsroom was beyond control", and that disapproval of the "monitor" could cost a reporter or editor their job.[36] Cheong identifies the first monitor as S. R. Nathan, director of the Ministry of Defence's Security and Intelligence Division and later president of Singapore.[36] Editors were bound by out of bounds markers to denote what topics are permissible for public discussion,[37] resulting in self-censorship.[38]

The Straits Times has also been criticised by netizens for sloppy and biased reporting. For instance, the newspaper repeatedly interviewed a commuter named Ashley Wu on 8 occasions within a span of 10 months, whenever the trains broke down, rather than getting fresh viewpoints from different affected commuters.[39][40] The newspaper is also known to modify and insert additional lines to op-ed contributors' works, altering the tone and message of the articles, without notifying them in advance.[41]