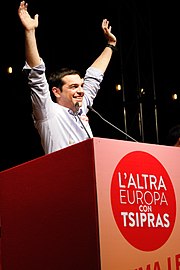 Alexis Tsipras speaks during The Other Europe rally in Bologna

In the 2014 EP election the list obtained 4.0% of the vote, just above the 4% threshold, and 3 elects to the European Parliament: Eleonora Forenza (Communist Refoundation Party), Curzio Maltese (independent, later Left Ecology Freedom) and Barbara Spinelli (independent). After the election, they joined the European United Left–Nordic Green Left (GUE/NGL) Group. In May 2015 Spinelli left AET, becoming an independent MEP within GUE/NGL.[5]

In July 2015 two senators, Fabrizio Bocchino and Francesco Campanella, elected in the 2013 general election with the Five Star Movement and later founding members of the short-lived Italy Work in Progress party, launched a sub-group named "The Other Europe with Tsipras" within the Mixed Group of the Senate. In March 2016 the sub-group was folded into Italian Left, which had been launched primarily by Left Ecology Freedom and dissidents of the Democratic Party.

AET was founded on 5 March 2014 in Rome by some Italian intellectuals, Andrea Camilleri, Paolo Flores d'Arcais, Luciano Gallino, Marco Revelli, Barbara Spinelli and Guido Viale.[6] The alliance was then composed of the following parties:[7][8][9]