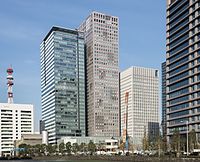 Nikkei headquarters on the left in Ōtemachi, Chiyoda, Tokyo

The Nikkei, formally known as The Nihon Keizai Shimbun (日本経済新聞, Japan Economics Newspaper), is Nikkei, Inc.'s flagship publication and the world's largest financial newspaper, with a daily circulation exceeding three million. The Nikkei 225, a stock market index for the Tokyo Stock Exchange, has been calculated by the newspaper since 1950.[2]

The roots of the Nikei Yomiuri's career started with an in-house newspaper department of Mitsui & Company in 1876 when it started publication of Chugai Bukka Shimpo (literally Domestic and Foreign Commodity Price Newspaper), a weekly market-quotation bulletin. The department was spun out as the Shokyosha in 1882. The paper became daily (except Sunday) in 1885 and was renamed Chugai Shogyo Simpo in 1889. It was merged with Nikkan Kogyo and Keizai Jiji and renamed Nihon Sangyo Keizai Shimbun in 1942. The paper changed its name to the Nihon Keizai Shimbun in 1946.[3]

As of 30 November 2015 Nikkei became the official owner of the Financial Times, having bought the newspaper from Pearson PLC.[4]

Newspapers including Nihon Keizai Shimbun are displayed at station shops

Nikkei sells these newspapers around the world, in their original languages and in translation. It also makes many of its Japanese articles available in English through wire services, an English language website, and a licensing agreement with LexisNexis.

Nikkei agreed on 23 July 2015 to buy the UK-based FT Group, which includes business daily Financial Times, for the equivalent of $1.32 billion from Pearson PLC.[7][8]

Nikkei also owns TV Tokyo and Nikkei CNBC, which provides coverage of the Japanese market during trading hours and rebroadcasts CNBC during off-hours and weekends.

Main article: The Ransacking of Next Media Headquarter

During the 810 crackdown in Hong Kong, the Hong Kong police searched the office of Apple Daily. The founder Jimmy Lai and other social activists including Agnes Chow were arrested. On the same day, the Hong Kong office of The Nikkei was also searched by the Hong Kong Police[10].