The Great Rapprochement, according to historians including Bradford Perkins, describes the convergence of diplomatic, political, military and economic objectives between the United States and Great Britain in 1895–1915, the two decades up to and including the beginning of World War I. 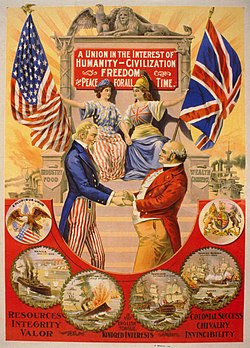 Uncle Sam embracing John Bull, while Britannia and Columbia hold hands and sit together in the background in The Great Rapprochement (1898).

Adam Smith predicted in The Wealth of Nations (1776) that if given representation in Parliament, in a century the Thirteen Colonies would become the center of the British Empire, but the American Revolution that began at that time disrupted the empire's relationship with the new United States.[1] The War of 1812 and disputes along the Canada–US border continued to cause suspicion between the two countries. The U.S. was seen as a potential threat by the British Empire, which was seen in turn as the antique and aristocratic empire which had once ruled America.

Americans, for their part, remained guarded in their assessment of British aims and motives after 1815, in no small part due to the status of "belligerent" conferred by Her Britannic Majesty's government upon the Confederate States of America during the American Civil War (1861-1865). Particularly galling to the United States was the building, arming and launching of the CSS Alabama from an English port in 1862. The Alabama had a rather too-successful career disrupting U.S. shipping in the Atlantic until it was sunk in the Battle of Cherbourg in 1864. The Alabama Claims were settled between the two Atlantic powers by arbitration several years after the war, forming a useful model for resolving other disputes arising between the two nations into the early 20th Century.

Britain itself remained at all times a model of civilization for Anglo-Americans, a still overwhelming proportion of the upper echelons of American society well into the 20th Century. Cultural and economic ties served to keep the two nations at something less than arm's length during even the very worst of times. For example, there was ambivalence and even open opposition to the War of 1812 in the United States, and especially New Englanders were quick to let bygones be bygones almost immediately after the cessation of hostilities in 1815.

Even before the American Revolution, Americans were well aware of how much they owed to their British background, and the British institutions had always contrasted favorably against their European counterparts; as early as 1823, Britain backed up the American Monroe Doctrine, and the two countries cooperated in naval West Africa Squadron missions against the slave trade.

in addition, the differences that had separated an agrarian and anti-imperialist United States and the industrialized, imperialistic Britain rapidly diminished after 1865. The United States emerged from its civil war as a major industrial power with a renewed commitment to a stronger Federal (centralized) government vis a vis the individual States. It emerged from the Spanish–American War (1898) as an imperial power with possessions around the globe, and a special interest in the approaches to what in 1914 became the Panama Canal. At the same time, Britain was coming under increasing pressure from the growth of the German Empire's economy and navy, and it was cutting back on potential conflicts on the periphery of the empire in order to focus on the rising threat across the North Sea.[2] As part of the process of imperial retrenchment, Britain resolved a border conflict between Canada and Alaska, withdrew its objections to an American-controlled canal in the Hay–Pauncefote Treaty of 1901, and agreed in 1902 to arbitrate a debt collection dispute with Venezuela. Perhaps foreseeing the coming Anglo-German conflict in his old age, Otto von Bismarck remarked at the end of the 19th century that the most significant event of the 20th century would be "The fact that the North Americans speak English".[3]

By 1901 many influential Britons advocated for a closer relationship between the two countries. W. T. Stead even proposed that year in The Americanization of the World that the British Empire and the United States merge to unify the English-speaking world, as doing so would help Britain "continue for all time to be an integral part of the greatest of all World-Powers, supreme on sea and unassailable on land, permanently delivered from all fear of hostile attack, and capable of wielding irresistible influence in all parts of this planet". The Scottish-born American Andrew Carnegie shared the goal, telling Stead "We are heading straight to the Re-United States".[1] As American Anglophobia declined, London realized the value of a long-term ally that would prevent an upset in Britain's balance of power, which Germany and Russia appeared to threaten. America seemed to understand and to some extent agree with British imperial aspirations, if not always with the methods used in their pursuit. Britain's adoption of American Secretary of State John Hay's "Open Door Policy" toward China garnered much good will on the Western side of the Atlantic, further accelerating the pace of Rapprochement after 1900. After a final British flirtation with Germany's anti-American designs in the Venezuelan crisis of 1902–03, Britain and America embraced unreservedly during the Presidency of Theodore Roosevelt (1901-1909).

The American culture and language largely derived from those of the United Kingdom. However, Irish Catholics in the U.S. were strongly hostile to Britain (because of the issue of independence for Ireland), and pushed the Democratic Party toward hostile measures, such as the dispute over the Venezuela boundary.[4]

The most notable sign of a warming in Anglo-American relations was Britain's support during the Spanish–American War in 1898. Britain had previously favored Spanish control over Cuba, because the possession of Cuba by an unfriendly United States might harm British trade in the Caribbean. However, with the warming of Anglo-American relations and a guarantee of Cuban independence by the U.S. in 1898, Britain abandoned this policy and supported America's position on Cuba and the war. Officially Britain was neutral. At the same time, Washington refused to give support for the Boers in the Second Boer War.[5]

At the start of the Spanish–American War, most Continental European powers remained neutral and cool though warning Spain repeatedly not to provoke a war with the more powerful U.S. Britain also remained neutral but openly sided with America.[6] During the 90-day war, Britain sold coal to the U.S. Navy and allowed the U.S. military to use Britain's submarine communications cables to communicate.[7][8] When Commodore Dewey's fleet sailed out of Hong Kong's harbor for Manila, the British soldiers and sailors in the harbor unabashedly cheered for them.[9]