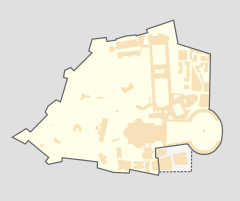 Gallery of Maps
Location on a map of Vatican City 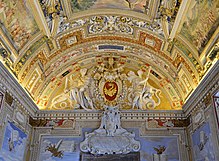 The Gallery of Maps[1] (Italian: Galleria delle carte geografiche) is a gallery located on the west side of the Belvedere Courtyard in the Vatican containing a series of painted topographical maps of Italy based on drawings by friar and geographer Ignazio Danti.[1]

The gallery was commissioned in 1580 by Pope Gregory XIII as part of other artistic works commissioned by the Pope to decorate the Vatican. It took Danti three years (1580–1583) to complete the 40 panels of the 120 m long gallery.

Map of Italy, Corsica and Sardinia – The Gallery of Maps – Vatican Museums.

The panels map the entirety of the Italian peninsula in large-scale frescoes, each depicting a region as well as a perspective view of its most prominent city. It is said that these maps are approximately 80% accurate.

After the series of regional maps, there are two general geographical maps :

At the beginning and at the end of the gallery:

The decorations on the vaulted ceiling are the work of a group of Mannerist artists including Cesare Nebbia and Girolamo Muziano.