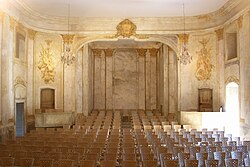 The French Theater of Gustav III was a French language theater active in Sweden between 1781 and 1792. The French theater company performed both before the Swedish royal court in the theaters of the royal palaces, as well as before the Swedish public in Stockholm. It is known to have played a significant part in the education of the pioneer generation of actors at the Royal Dramatic Theatre.

The French theater was composed in Paris by Jacques Marie Boutet de Monvel in 1781, when it was engaged by king Gustav III of Sweden to perform before the Swedish royal court. Initially, they performed exclusively for the royal court in the theaters of the royal residences, such as Drottningholm Palace Theatre and Confidencen.

From 1783 onward, they also performed before the Swedish public at Bollhuset. The public performances were, in practice, normally visited exclusively by the upper classes of Stockholm, who were able to understand the French language. The French Theater appeared before the public at Bollhuset on Wednesdays and Fridays, and at the royal court whenever they were commanded to. The company were considered of high quality, and performed the latest plays from Paris.

The French Theater were dissolved after the death of Gustav III in 1792.