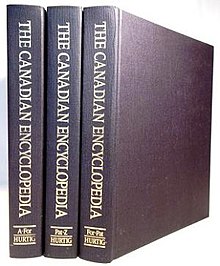 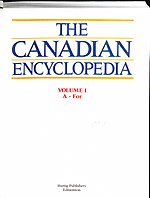 The Canadian Encyclopedia (abbreviated as TCE; French: L'Encyclopédie canadienne) is a source of information on Canada published by Historica Canada of Toronto. Articles appear in English and French. It is available online, at no cost. The Canadian Encyclopedia includes 14,000 articles in each language on numerous subjects including history, popular culture, events, people, places, politics, arts, First Nations, sports and science.

The website also provides access to the Encyclopedia of Music in Canada, the Canadian Encyclopedia Junior Edition, Maclean's magazine articles, and Timelines of Canadian History.

Canada had been without a national encyclopedia since the 1957 edition of Encyclopedia Canadiana. When looking through the Canadian entries in existing encyclopedias such as Random House, Canadian nationalist and book publisher Mel Hurtig found blatant errors (e.g., Brian Mulroney was described as a Liberal, rather than Conservative, prime minister) and omissions. In response, in the 1980s he launched a project to create a wholly new Canadian encyclopedia with support from the Alberta Premier Peter Lougheed.[1] The Editor-in-Chief James Harley Marsh recruited more than 3,000 authors to write for it.

They made index cards for every fact in the encyclopedia, signed off by the researcher, utilized three sources, and had every article read by three outside readers. Then the entire encyclopedia was proofread by an independent source.[2] Over 3,000 people contributed to the content and accuracy of the encyclopedia's entries.[3]