The Atom Station (Icelandic: Atómstöðin) is a novel by Icelandic author Halldór Laxness, who was awarded the Nobel Prize in Literature in 1955. The initial print run sold out on the day it was published, for the first time in Icelandic history.[1]

Ugla, an unrefined girl from the countryside, moves from an outlying area of Northern Iceland to the capital city of Reykjavík in order to work for Búi Árland, a member of parliament, and to learn how to play the organ. She’s met with a world that’s completely foreign to her: politicians and the military move freely about the city, and she views city residents as spoiled, snobbish and arrogant. In contrast, she comes from a rural area where the Icelandic Sagas of the Middle Ages constitute the majority of what people discuss and ponder and are viewed as more important than reality. These historical backgrounds are certainly important and provide crucial patterns. The prime minister subsequently carries out secret dealings with the Americans and “sells” the country. Ugla, however, also confronts other current issues, above all in the organ player’s house. There, she comes in contact with communist and anarchist mindsets and likewise protests the construction of an atom station in Iceland. After a short relationship with Búi Árland, Ugla decides to return to the “selfconscious policeman”, who is the father of her recently born child.

At the Organist's house

The Atom Station, written in 1946 and 1947, was published in 1948. The historical background of the novel is the British and later American occupation of Iceland during World War II, including the urbanisation and monetization of the Icelandic economy it stimulated. Many viewed Iceland’s independence as threatened due to the United States’ request in 1946 to establish a military base in Keflavík for 99 years, and pressure on Iceland to join NATO. Laxness was critical of the fact that Icelandic jurisdiction was not applicable to the area within the military base. But above all, he saw a threat to Icelandic life, because, in the event of an atomic war, Iceland would become a potential target due to the military base. These fears are based on the impression left by the two atomic bombs which had been recently dropped on Hiroshima and Nagasaki. Laxness began writing the novel shortly after these events; however, the Icelandic Parliament (the Althing) eventually agreed to the request and concluded the Keflavík Contract, provoking the 1949 anti-NATO riot in Iceland.

Many of the characters in the novel can be understood as satires of real figures in Icelandic business and politics at the time, or otherwise modelled on Laxness's friends and acquaintances, though the work is too sophisticated simply to be read as a roman à clef.[2] According to Laxness's biographer Hannes Hólmsteinn Gissurarson,[3] 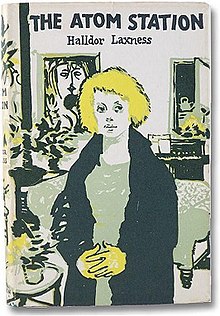 Early Icelandic reviewers read the book primarily as a satire on the politics of the day; it has traditionally been seen as one of Laxness's weaker works,[4] though it has long been read as Iceland's first urban novel, foreshadowing the prominence of Reykjavík in more recent literature.[5] However, more recent critics have seen it as offering more enduring theological,[6] philosophical[7] and political commentary: Giuliano D'Amico, for example, argues that 'neither with the Americans nor with the Soviets, the characters of Atómstöðin seem to advocate for a “Third Europe” that ... resembles the “third space” articulated by postcolonial theory'.[8]

Laxness endured political persecution for the novel: the Alþingi withdrew his state writer's stipend; he was prosecuted for describing an abortion; and 'Icelandic and American authorities even started investigating his periods of residence in America, with the hope of finding some fiscal irregularities and ruining him'. He also struggled to get the novel translated.[9]

Atómstöðin has been characterised as 'what many readers and critics gradually came to think of as the exemplary Reykjavík novel', focusing on urban Icelandic life for the first time.[10]

Laxness dubbed one of his characters, benjamín, an atómskáld ('atom-poet'), as a derogatory reference to modernist poets. The name came to be applied to a real group of poets, the Atom Poets.[11]

The book was adapted as a film by Þorsteinn Jónsson in 1984.[12] Through the film, the book has been seen to have continued resonances in twenty-first-century Iceland: 'the powerful imagery is coincidentally linked to the 2009 protests ... following the Icelandic banking crisis'.[13]