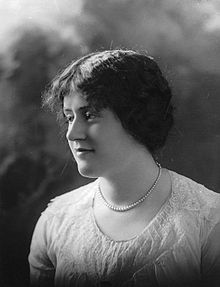 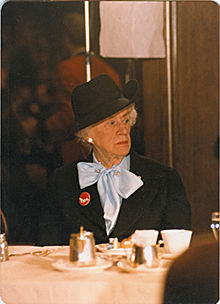 Born in Saint-Irénée-les-Bains[2], Quebec, she was raised in a wealthy family, the daughter of Blanche (MacDonald), Lady Forget, and Sir Rodolphe Forget. She married Pierre-François Casgrain, a wealthy Liberal politician with whom she raised four children.

In 1905, at 8 years old, she becomes a boarder at the Dames du Sacré-Coeur, at Sault-au-Récollet. She hopes to further her studies at university, but her father opposes the notion of not seeing its use. According to him, she should rather learn how to manage a household, a quality that is befitting of a future spouse of her stature[3].

Thérèse accompanies her husband in Ottawa for the opening of the parliamentary session in the spring of 1918. It is in the federal capital that she takes conscience of the importance of the question of the right to vote for women. During the last federal election, a certain number of women were allowed to vote. The governor Borden will later adopt the Women's Suffrage Act, a project of law that would allow the right to vote at federal elections for all Canadian women of twenty-one years or older. However, in Québec, women still couldn't vote during provincial elections. The opposition for such an extension of the law was strong, notably from the clergy and the conservative elite.

Casgrain led the women's suffrage movement in Quebec prior to World War II. She founded the Provincial Franchise Committee in 1921 and campaigned for women's rights and for the right to vote in Quebec elections, a right that was not won until 1940. From 1928 to 1942, she was the leader of the League for Women's Rights. In the 1930s, she hosted a popular radio show Fémina.

In the 1942 federal by-election, she stood as an "Independent Liberal" candidate in the Charlevoix-Saguenay riding, the same seat formerly held both by her father and by her husband.

Following World War II, she left the Liberal Party and joined the social democratic Co-operative Commonwealth Federation (CCF). In 1948, she became one of the federal vice presidents of the CCF. She led the Quebec wing of the party, the Parti social démocratique du Québec, from 1951 to 1957. She was, therefore, the first female leader of a political party in Canada. She was a CCF candidate in a 1952 federal by-election and in the 1953, 1957, and 1958 federal general elections and a New Democratic Party candidate in the 1962 and 1963 federal general elections. She also used her position as a platform to campaign against the government of Maurice Duplessis.

In the 1960s, she became a campaigner against nuclear weapons, founding in February 1961 the Quebec wing of Voice of Women (VOW) and serving as the national president of VOW from 1962-1963[2]. She also was a founder of the La Ligue des droits l'homme devenue en 1978 la Ligue des droits et libertés and the Fédération des femmes du Québec. In the 1960s, she was president of the Quebec wing of the New Democratic Party, the CCF's successor; she ran in the April 1963 Canadian federal election.

In 1969, Casgrain was elected president of the Consumers' Association of Canada Quebec section. Casgrain succeeded to an anglophone president, David Macfarlane, who considered that the Quebec section’s position was indefensible, as it was dominated by anglophone elements and used English as its primary work language. Many members of the association hoped Casgrain would fix this problem as president.[4]

Prime Minister Pierre Trudeau appointed Casgrain to the Senate of Canada in 1970, where she sat as an independent for nine months before reaching the mandatory retirement age of 75. As senator she questioned the prime minister's policy on the use of Canadian-made napalm and defoliants in Vietnam.[2]

For the last decade of her life, she was committed to helping the rights of American Indian women. She also invested herself in charity works and consumer rights.

During the 1980 Quebec referendum, she positions herself for the indepence of Quebec. In the Yvettes affair, she reprimands Lise Payette, who was then minister of the feminine Condition[5].

She died in 1981.[6] Thérèse Casgrain's body is interred in the Cimetière Notre-Dame-des-Neiges in Montreal.

In recognition of her achievements, in 1967, she was made an Officer of the Order of Canada, and in 1974, she was promoted to Companion. In 1968 she received an honorific PhD from the University of Montreal.

In 1979, she was named one of the first winners of the Governor General's Award in Commemoration of the Persons Case.[7]

In 1974, Loyola College, one of Concordia University's founding institutions, awarded her the Loyola Medal.[8] She received an honorary doctorate from Concordia on 1980.[9]

In 1980 she received the title of Grand Montrealer in the social category.[10] In 1981 she received an honorary phd from the University of Windsor.

In 1982, the Thérèse Casgrain Volunteer Award was created in 1982 by the Liberal government of Pierre Trudeau. It was discontinued in 1990 under the Conservative ministry of Brian Mulroney, but was begun anew in 2001 under the Liberal ministry of Jean Chrétien. In 2010, during the Conservative ministry of Stephen Harper, the award was eliminated and then repackaged as the "Prime Minister's Volunteer Award".[11] In 2016 under the Liberal government of Justin Trudeau the award was once again renamed as the Thérèse Casgrain Lifetime Volunteer Achievement Award.[12]

In 2012, the Hon. Pauline Marois, first female premier of Quebec, unveiled a statue of Casgrain, Marie Lacoste Gérin-Lajoie, Idola Saint-Jean and Marie-Claire Kirkland. The statue by Jules Lasalle was to celebrate the 50th anniversary of Kirkland being made the first Canadian female minister.[16]

in 2016, she became commander of the Order of Montreal (a posthumous title)[17]

The Thérèse F.-Casgrain Foundation fonds is conserved at the Montreal archives center of the National Library and Archives of Quebec.[19]