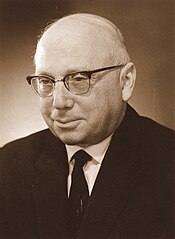 Teva's facilities are located in Israel, North America, Europe, Australia, and South America. Teva shares are listed on the Tel Aviv Stock Exchange. The company is a member of the Pharmaceutical Research and Manufacturers of America (PhRMA).[5][6] 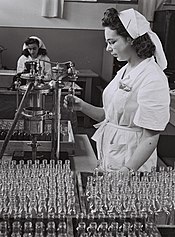 Worker at Assia plant in the 1930s 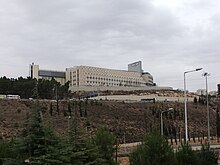 Founding of Salomon, Levin, and Elstein

Teva's earliest predecessor was Salomon, Levin, and Elstein Ltd., a wholesale distributor based in Jerusalem, then part of Ottoman Syria, that was founded in 1901, and used camels to make deliveries.[7] During the 1930s, new immigrants from Europe founded several pharmaceutical companies including Teva ("nature" in Hebrew) and Zori. In the 1930s, Salomon, Levin, and Elstein Ltd. also founded Assia, a pharmaceutical company.

Teva Pharmaceutical Industries was founded by Günther Friedländer and his aunt Else Kober on May 1, 1935. The original registration was under the name Teva Middle East Pharmaceutical & Chemical Works Co. Ltd. in Jerusalem. Friedländer was a German pharmacist, botanist and pharmacognos, who immigrated to Mandatory Palestine in 1934, following the Nazi Party Rise to power.

The company was built with an investment of 4,900 pounds sterling, which came from the family's own capital and partly from loans from other German immigrants. Capital shortage led to the joining of the banker Alfred Feuchtwanger as a partner in Teva, who received 33% of the shares in return for his investment.[8] In 1951, Feuchtwanger initiated an initial public offering to raise capital through the newly founded Tel-Aviv Stock Exchange, and Teva became a public company.[7]

Friedländer's business philosophy opined that the pharmaceutical industry has a reliable basis in difficult economic times, since "A Jewish mother will always buy medicine for her children". In the Second World War, the company provided medicine to the allied forces and in particular to the British army present in the Middle East. After the war, Sir Alan Gordon Cunningham, the last of the High Commissioners for Palestine and Transjordan, visited Teva on behalf of the Secretary of State for the Colonies. His visit promoted Teva's reputation in the pharmaceutical market and created a momentum for Teva's development.

During the Second World War and until the termination of the British Mandatory Palestine regime, Teva exported its medical products to Arab countries. In 1941, Friedländer presented Teva products in an exhibition held in Cairo, Egypt. The exhibition was sponsored by the General Agent and Sole Distribution of medicine in Egypt and Sudan, Syria and Lebanon. Later on, Teva exported its products to the US, Soviet Union (USSR), health institutes in Denmark, Czechoslovakia, Persia and Burma.

In 1954, Teva received a Certificate Excellence in Training award from the Israeli President, Yitzhak Ben Zvi.[citation needed] In 1964, Teva partnered with Sintex, a company from Mexico, and Schering Plough.[citation needed]

Merger of Assia, Zori and Teva

In 1964, Assia and Zori merged and in 1968 acquired a controlling stake in Teva.[9] In 1976, the three companies merged into the modern-day Teva Pharmaceutical Industries Ltd.[9] In 1980, Teva acquired Ikapharm, then Israel's second largest drug manufacturer.[10]

In 1982, Teva was granted approval by the U.S. Food and Drug Administration (FDA) for its Kfar Saba manufacturing plant.[11]

In October 2003, Teva announced its intentions to acquire Sicor Inc. for $3.4 billion.[15] Following the announcement, the acquisition was completed on January 22, 2004, which marked Teva's entry into biosimilars' market.[16]

In 2005, Teva opened a new, state-of-the-art pharmaceutical manufacturing plant in Har Hotzvim, a technology park in Jerusalem. The plant received FDA approval in early 2007.[17] Teva entered the Japanese market in 2005, and in 2008 established a generics joint venture with Kowa.[18][19]

On March 18, 2010, Teva said it planned to acquire German generic Ratiopharm for US$5 billion. The deal was completed in August 2010.[17] In May 2011, Teva bought Cephalon for US$6.8 billion.[25] The same month, Teva announced the ¥40 billion purchase of a majority stake in Japanese generic drug company Taiyo Pharmaceutical Industry, a move to secure a Japan-local production facility.[18] Teva completed the $934 million acquisition in July 2011.[26] In June 2013, Teva acquired US firm MicroDose Therapeutx for $40 million with as much as $125 million being paid in regulatory and developmental milestones [27] In 2010, Teva announced that it would build its main distribution center for the Americas in Philadelphia, PA, and was considering opening its US headquarters in the area.[17] In 2010, it had 39,660 employees. In Israel, the number of workers rose 7.5% by 6,774.[28] In March 2010, Teva acquired German-based company Ratiopharm in a deal worth almost $5 billion, significantly expanding its European coverage.[29][30][31] In October 2010, Teva entered a licensing agreement with BioTime to develop and market BioTime's OpRegen for the treatment of age-related macular degeneration,[32] an effort that in 2013 received $1.5 billion in funding from Israel's Office of the Chief Scientist.[33]

In January 2014, Teva acquired NuPathe, after outbidding Endo, for $144 million.[35] In June 2014, Teva acquired Labrys Biologics for up to $825 million,[36] the aim being to strengthen the company's migraine pipeline through addition of LBR-101, an anti-CGRP monoclonal antibody therapeutic.[37]

In March 2015, Teva acquired Auspex Pharmaceuticals for $3.5 billion growing its CNS portfolio.[38] In April, Teva offered to acquire Mylan for $40 billion,[39] only a fortnight after Mylan offered to buy Perrigo for $29 billion.[40] Teva's offer for Mylan was contingent on Mylan abandoning its pursuit of Perrigo.[41] Mylan stated in June 2015 that Teva's disclosure that it had a 1.35 percent stake in Mylan violated US antitrust rules.[42] In October, the company acquired Mexico-based Representaciones e Investigaciones Medicas (Rimsa) for around $2.3 billion.[43] In the same month Teva acquired Gecko Health Innovations.[44] In November 2015, the company announced it would collaborate with Heptares Therapeutics with its work on small-molecule calcitonin gene-related peptide antagonists for migraine treatment, with the deal generating up to $410 million.[45]

Teva Active Pharmaceutical Ingredients (TAPI) operates within Teva as a stand-alone business unit. In 2009, TAPI's sales to third parties totaled $565 million, and in 2010 sales rose by 13% to a total of $641 million.[citation needed]

In July 2017, it was reported that Pascal Soriot, CEO of AstraZeneca since 2012, would become the next CEO of Teva, succeeding Erez Vigodman,[46][47] however this was soon refuted.[48] As of August 2017, the company has struggled to attract a new CEO, leading to mounting questions for the board.[49] In August 2017, the board of directors announced a 75% cut in the dividend, reflecting declining profitability, and the share price fell by almost half in the days following.[50][51] As of September 11, 2017, Teva remained the “world’s biggest seller of generics medicines.” On September 11, 2017, it was reported that they had selected Kåre Schultz as the new Teva CEO.[52] A day later the company announced it would sell its Paragard contraceptive brand to Cooper Cos for $1.1 billion, with the funds being used to pay down debt.[53] Days later the company announced further divestments: a sale of contraception, fertility, menopause and osteoporosis products to CVC Capital Partners Fund VI for $703 million and its emergency contraception brands for $675 million to Foundation Consumer Healthcare.[54] By December, the company had announced a drastic 25 percent workforce reduction (greater than 14,000 employees) as part of a two-year cost-reduction strategy.[55] Following considerable lobbying by the Israeli Government, from whom Teva received considerable tax breaks,[56] and from Israel's labor federation, the Histadrut, Teva agreed to delay some of the layoffs in Israel.[57]

In October 2019 Teva faced criticism for making a “business decision to discontinue the drug” Vincristine, essential for the treatment of most childhood cancers according to the Food and Drug Administration.[58][59]

In July 2015, Allergan agreed to sell its generic drug business (Actavis Generics[60]) to Teva for $40.5 billion[61][62][63] ($33.75 billion in cash and $6.75 billion worth of shares).[64] As a result, Teva dropped its pursuit of Mylan. In order for the deal to gain regulatory approval, Teva sold off a number of assets, including a portfolio of five generic drugs to Sagent Pharmaceuticals for $40 million, as well as a further eight medicines to Dr. Reddy's in a $350 million deal.[60] Teva also sold a further 15 marketed generics, as well as three others which were close to market, for $586 million to Impax Laboratories.[65][66] In July, Teva sold off a further 42 products to Australian generics company, Mayne Pharma, for $652 million; the deal moved Mayne up 50 spots, into the top-25 companies of US generic companies.[67] As part of the deal Teva will seek to raise $20 to $25 billion[68] through a bond sale.[69]

After completing the $39 billion acquisition of Actavis Generics, Teva announced another, smaller, deal with Allergan, agreeing to acquire its generic distribution business Anda for $500 million.[70]

The following is an illustration of the company's major mergers and acquisitions and historical predecessors (this is not a comprehensive list):

On October 21, 2011, Par Pharmaceutical has sealed the deal to three products from Teva Pharmaceutical Industries, which the Israeli firm was required by the US Federal Trade Commission to divest before it could acquire US biotech Cephalon for $6.8 billion.[71] 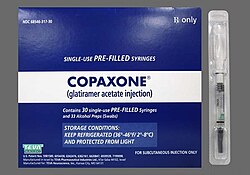 Teva holds patents on multiple drugs, including: Copaxone, a specialty drug[93] (for the treatment of multiple sclerosis), now the world's best selling MS drug,[94] and Azilect (sold as Agilect in some countries) for treatment of Parkinson's disease. By July 2015, Copaxone held a "31.2 percent shares of total MS prescriptions in the United States."[94] Teva's new 40 mg version of Copaxone taken three times a week "accounted for 68.5 percent of total Copaxone prescriptions in the United States."[94] Copaxone accounts for about fifty percent of "Teva's profit and 20 percent of revenue."[94] Competitors' Glatopa, 20 mg version of Copaxone, is taken once a day.[94]

In June 2006, Teva received from the FDA a 180-day exclusivity period to sell simvastatin (Zocor) in the U.S. as a generic drug in all strengths except 80 mg. Teva presently[when?] competes with the maker of brand-name Zocor, Merck & Co.; Ranbaxy Laboratories, which has 180-day exclusivity for the 80 mg strength; and Dr. Reddy's Laboratories, whose authorized generic version (licensed by Merck) is exempt from exclusivity.

In June 2010, the company announced it would discontinue its production of propofol, a major sedative estimated to be used in 75% of all US anesthetic procedures.[95]

In March 2015, Teva sold four anti-cancer compounds to Ignyta Inc. for $41.6 million. As part of the deal Teva sold the following compounds which were then renamed:[96]

In July 2019, the company stopped production of Vincristine, a critical drug used to treat the most common forms of childhood cancer, and was criticized by media for creating a worldwide shortage of the drug.[97] On 28 January 2020, the company announced that the Food and Drug Administration (FDA) had approved an autoinjector device for Ajovy (fremanezumab-vfrm) injection.[98]

On June 25, 2010, Bayer sued Teva for falsely claiming that Gianvi, Teva's Generic of Yaz, was "stabilized by betadex as a clathrate."[99] The lawsuit stems from Bayer's US patent, 5798338, on the binding and preservative agents that were not in fact present in Gianvi. "In the preparation of such low-dosed dosage forms, strong fluctuations of the active ingredient concentrations in the dosage units occur almost unavoidably (inadequate content uniformity), which manifest themselves more strongly, the smaller the amount of the active ingredient. It has now been found that the drawbacks that are observed especially in the preparation and storage of dosage forms which contain low-dosed steroidal sex hormones can be avoided, at least to a large extent, if dosage forms are prepared that contain powdery cyclodextrin clathrates of these active ingredients."[100] The settlement of the lawsuit resulted in Teva changing its product marketing to remove the claim that it used the same ingredients as Yaz.[101] Bayer's patent is on a method specifically designed to prevent oxidative degradation of the estrogen.

In January 2015, the Supreme Court of the United States decided on the Copaxone patent in Teva Pharmaceuticals USA, Inc. v. Sandoz, Inc..[102]

In May 2019, Teva Pharmaceuticals USA was one of 19 drug companies sued for price fixing in the United States by 44 states for inflating its prices, sometimes up to 1000%, in an illegal agreement among it and its competitors.[105] Also in May 2019, Teva Pharmaceuticals USA agreed to pay $85 million to the U.S. state of Oklahoma to settle an opioid over prescription lawsuit.[106]

A full list of products is available from www.tevagenerics.com.

In 2018, Teva Pharmaceuticals USA recalled tablets containing valsartan due to the detection of N-nitrosodiethylamine (NDEA) which is a probable human carcinogen.[111]