Territorial evolution of the British Empire

The territorial evolution of the British Empire is considered to have begun with the foundation of the English colonial empire in the late 16th century. Since then, many territories around the world have been under the control of the United Kingdom or its predecessor states.

When the Kingdom of Great Britain was formed in 1707 by the union of the Kingdom of Scotland with the Kingdom of England, the latter country's colonial possessions passed to the new state. Similarly, when Great Britain was united with the Kingdom of Ireland in 1801 to form the United Kingdom, control over its colonial possessions passed to the latter state. Collectively, these territories are referred to as the British Empire. Upon much of Ireland gaining independence in 1922 as the Irish Free State, the other territories of the Empire remained under the control of the United Kingdom.

From 1714 to 1837 the British throne was held by a series of kings who were also the rulers of the German state of Hanover. However, this was purely a personal union, with Hanover maintaining its political independence otherwise, and so it is not usually considered to have formed part of the British Empire.

The nature of the territories (and peoples) ruled as part of the British Empire varied enormously. In legal terms the territories included those formally under the sovereignty of the British monarch (who held the additional title of Emperor (or Empress) of India from 1876 to 1947); various "foreign" territories controlled as protectorates; territories transferred to British administration under the authority of the League of Nations or the United Nations; and miscellaneous other territories, such as the Anglo-Egyptian Sudan, a condominium with Egypt. No uniform system of government was applied to any of these.

A number of countries (dominions) within the British Empire gained independence in stages during the earlier part of the 20th century. Much of the rest of the Empire was dismantled in the twenty years following the end of the Second World War, starting with the independence of India and Pakistan in 1947, and continued until the handover of Hong Kong to China in 1997. There remain, however, 14 global territories which remain under the jurisdiction and sovereignty of the United Kingdom.

The British Empire refers to the possessions, dominions and dependencies under the control of the Crown. In addition to the areas formally under the sovereignty of the British monarch, various "foreign" territories were controlled as protectorates; territories transferred to British administration under the authority of the League of Nations or the United Nations; and miscellaneous other territories, such as the condominium of Anglo-Egyptian Sudan. The natures of the administration of the Empire changed both by time and place, and there was no uniform system of government in the Empire.[1][2] 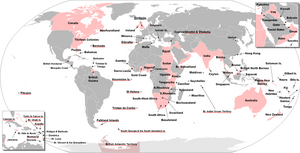 An anachronous map of British and, prior to the Acts of Union 1707, English imperial possessions

Colonies were territories that were intended to be places of permanent settlement, providing land for their settlers. The Crown claimed absolute sovereignty over them, although they were not formally part of the United Kingdom itself. Generally their law was the common law of England together with whatever British Acts of Parliament were also applied to them. Over time, a number of colonies were granted "responsible government", making them largely self-governing.

A Crown colony was a type of colonial administration of the English and later the British Empire, whose legislature and administration were controlled by the Crown.[3][4] 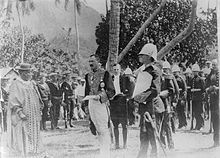 Crown colonies were ruled by a governor appointed by the monarch. By the middle of the 19th century, the sovereign appointed royal governors on the advice of the Secretary of State for the Colonies. This became the main method of creating and governing colonies.[5] Most Crown colonies, especially the white settler colonies had a bicameral legislature, consisting of an upper house usually called the Legislative council, which members were appointed and served a similar purpose as the British House of Lords. There also existed lower houses which were usually named the Legislative Assembly or House of Assembly. The lower house was usually elected, but suffrage was restricted to free white men only, usually with property ownership restrictions. Since land ownership was widespread, most white men could vote.[6] The governor also often had an Executive Council which had a similar function to the Cabinet in England but was not responsible to the colonial lower house. They held a consultative position, however, and did not serve in administrative offices as cabinet ministers do. Members of the Executive Council were not necessarily members of the lower house but were usually members of the upper house.[7] Later as the white colonies gained more internal responsible government, the lower house began to supersede the (usually unelected) upper house as the colonial legislature, and the position of Premier emerged.[8] 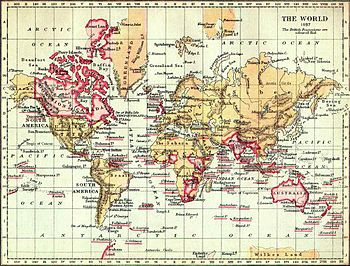 The British Empire in 1897, marked in traditional pink.

A number of colonies in the 16th and 17th centuries were granted to a particular individual; these were known as proprietary colonies. Proprietary colonies in America were governed by a Lord Proprietor, who, holding authority by virtue of a royal charter, usually exercised that authority almost as an independent sovereign. Eventually these were converted to Crown colonies.[10][11]

A chartered company is an association formed by investors or shareholders for the purpose of trade, exploration and colonisation. Chartered companies were usually formed, incorporated and legitimised under a royal charter. This document set out the terms under which the company could trade, defined its boundaries of influence, and described its rights and responsibilities. Groups of investors formed companies to underwrite and profit from the exploration of Africa, India, Asia, the Caribbean and North America, under the patronage of the state. Some companies such as the East India Company ruled large colonial possessions (especially in India).[12][13]

Following the Fourth Anglo-Ashanti War in 1896, the British proclaimed a protectorate over the Ashanti Kingdom.

A protectorate is a territory which is not formally annexed but in which, by treaty, grant or other lawful means, the Crown has power and jurisdiction. A protectorate differs from a "protected state". A protected state is a territory under a foreign ruler which enjoys British protection, over whose foreign affairs she exercises control, but in respect of whose internal affairs she does not exercise jurisdiction.[2]

Dominions were semi-independent polities that were nominally under the Crown, constituting the British Empire and British Commonwealth, beginning in the later part of the 19th century.[14][15] The dominions had been previously Crown colonies, and some of the colonies had been united to form dominions such as Union of South Africa and Commonwealth of Australia. Dominion status was formally defined in the Balfour Declaration of 1926, which recognised these countries as "autonomous Communities within the British Empire", thus acknowledging them as political equals of the United Kingdom; the Statute of Westminster 1931 converted this status into legal reality, making them essentially independent members of what was then called the British Commonwealth. Initially, the Dominions conducted their own trade policy, some limited foreign relations and had autonomous armed forces, although the British government claimed and exercised the exclusive power to declare wars. However, after the passage of the Statute of Westminster the language of dependency on the Crown of the United Kingdom ceased, where the Crown itself was no longer referred to as the Crown of any place in particular but simply as "the Crown". Arthur Berriedale Keith, in Speeches and Documents on the British Dominions 1918–1931, stated that "the Dominions are sovereign international States in the sense that the King in respect of each of His Dominions (Newfoundland excepted) is such a State in the eyes of international law". After then, those countries that were previously referred to as "Dominions" became Commonwealth realms where the sovereign reigns no longer as the British monarch, but as monarch of each nation in its own right, and are considered equal to the United Kingdom and one another. [16]

Mandates were forms of territory created after the end of the First World War. A number of German colonies and protectorates and Ottoman provinces were held as mandates by the United Kingdom (Tanganyika, British Cameroons, Togoland, Palestine and Mesopotamia); and its dominions of Australia (New Guinea, Nauru), New Zealand (Western Samoa), and South Africa (South West Africa). In theory these territories were governed on behalf of the League of Nations for the benefit of their inhabitants. Most converted to United Nations Trust Territories in 1946.[17] 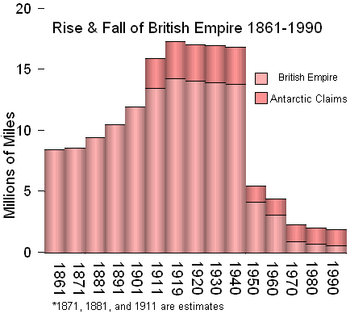 The Rise and Fall of the British Empire, graph starting in 1861

Within twenty years of the partition and independence in 1947 of British India (considered to be the most important colonial possession), most of the Empire's territories had achieved full independence. Today 14 former colonies (since 2002 known as British Overseas Territories) remain under British rule; the term "colonies" is no longer officially used to describe these.

Almost all of the British Overseas Territories are islands (or groups of islands) with a small population; some are in very remote areas of the world. Of the territories with a permanent population, all have at least some degree of internal self-government, with the United Kingdom retaining responsibility for defence and external relations.

The fourteen British Overseas Territories are:

The three Crown dependencies are:

Central America and the Caribbean

(Islands in the Atlantic Ocean)

(Islands in the Indian Ocean)

Australasia and the Pacific

Treaties and Acts of Parliament, etc.

This is a listing of the more important treaties, Acts of Parliament, and other legal instruments and events affecting the nature and territorial extent of the British Empire.