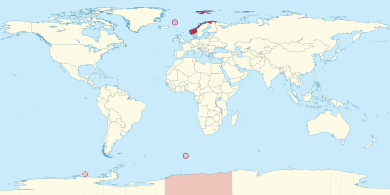 Norwegian Kingdom and some of its current overseas territories

This is a list of current and former territorial possessions of the Kingdom of Norway.

Integral areas of Norway which are unincorporated:

Svalbard with Bear Island are subject to the provisions of the Svalbard Treaty. Svalbard and Jan Mayen are sometimes grouped together for some categorization purposes.

Current dependencies of Norway are all in the southern polar region:

Location of Norway and its overseas territories

Norwegian Kingdom at its greatest extent about 1265 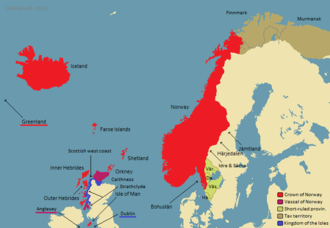 Kingdom of Norway (872–1397) with its homeland, dependencies and possessions 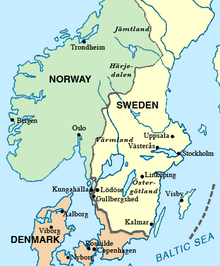 Norwegian Kingdom and its former homeland before 1645

The actual time of cession of the islands is somewhat disputed. Some claim it took place with the Union of Denmark and Norway in 1536/37, as the possessions of the Norwegian crown were claimed by the Oldenburg king. Nevertheless, they were still referred to as "dependencies of Norway" in later official documents. Also the Treaty of Kiel states: "...and provinces, constituting the kingdom of Norway, [..], together with their dependencies (Greenland, the Faroe Isles, and Iceland, excepted); [...] shall belong in full and sovereign property to the King of Sweden,...", clearly indicating that they were until 1814 regarded as a part of Norway.[3]

The spread of Norwegian whaling industry to Antarctica in the early 20th century motivated Norway, right after its independence from the United Kingdoms of Sweden and Norway in 1905, to pursue territorial expansion not only in the Arctic claiming Jan Mayen and Sverdrup Islands, but also in Antarctica. Norway claimed Bouvet Island and looked further south, formally inquiring with Foreign Office about the international status of the area between 45° and 65° south latitude and 35° and 80° west longitude. Following a second such diplomatic démarche by the Norwegian Government dated 4 March 1907, Britain replied that the areas were British based on discoveries made in the first half of the 19th century, and issued the 1908 Letters Patent incorporating the British Falkland Islands Dependencies with a permanent local administration in Grytviken established in 1909.[23][24]