This city is divided in three sectors, namely Lachenaie, La Plaine and Terrebonne. In the past, these sectors were distinct cities, but, on 22 August 2001, they merged under the name of Terrebonne. According to the 2011 Canadian Census Terrebonne has a population of 111,575,[5] making it Montreal's fourth largest suburb.

The town of Lachenaie, which was founded in 1670 by Lord Charles Aubert de Lachenaye, is the oldest of the three towns that were merged.[citation needed] Some natives were already present on this territory at the time. The colonisation really started in 1647 when Lachenaie was merged with the Repentigny Seigniory. Louis Lepage de Ste-Claire, priest, canon, and the son of René Lepage de Sainte-Claire, acquired the Seigniory of Terrebonne on 2 September 1720. Abbot Louis Lepage de Ste-Claire built the first church in 1734 and the first manor in 1735. A few years later, Abbot Lepage equipped the town with both a saw mill and a flour mill.

The town of La Plaine was founded in 1830 on fragments of other towns, namely Mascouche, Sainte-Anne-des-Plaines, Saint-Lin, and Terrebonne. At that time, the lords of Terrebonne and Lachenaie built the road named "chemin de la Grande Ligne" to join the two towns. It is now called the boulevard Laurier. In 1877, the rail system was developed and stimulated the economic growth. The village of Saint-Joachim was founded during that time, which was later, in 1920, to be renamed La Plaine.

The first lord of Terrebonne was André Daulier-Deslandes, who was granted his title in 1673. Following the construction of the first wooden bridge in 1834, two main areas emerged. The commercial area was Terrebonne, while the agricultural one was Saint-Louis de Terrebonne. In 1985, these two cities merged.

Terrebonne is connected to Montreal's Central Station by commuter rail via the Terrebonne station of the Réseau de transport métropolitain (RTM) Mascouche line.

The city of Terrebonne is also equipped with a bus network, also operated by the RTM, which enables residents to reach several metro stations both in Laval and Montreal, amongst many other locations. Some examples include bus line 30 (or 30G), which brings inhabitants of Terrebonne to the Radisson metro station on Sherbrooke Street East, bus line 19 (or 19G), which reaches Montmorency metro station in Laval, and bus line 25, whose terminal stop is at the Henri-Bourassa metro station. 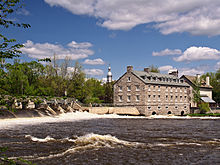 The Moulin neuf (New Mill) at the Île-des-moulins

The pre-industrial complex of the Île-des-moulins was amongst the most important ones in the province of Quebec during the 19th century. Although several infrastructures have degraded, a total of five buildings remain. The fourth lord of Terrebonne, Abbot Louis Lepage, had ordered the construction of the first flour mill in 1721 as well as the first saw mill around 1725.

In 1803, the bakery was built and established in the village. The actual saw and flour mills were built in 1804 and 1846, respectively. Four years following the construction of the flour mill that is currently standing at the Île-des-moulins to this day, the Moulin neuf (New Mill) was built in 1850. In addition, around the same time in 1850, the seigniory office was established.

In 1973, the Île-des-moulins was classified as a historic site of national interest by the Government of Quebec.[19] 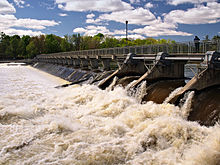 The Moulin-Neuf dam allows for the flow regulation of the Rivière des Mille Îles, as well as ice accumulation control in the spring.

The first dam at the Île-des-moulins was built in 1721, following the establishment of the very first flour mill. This dam linked the Île-des-moulins to the Ile Saint-Jean, passing through the small Île aux moutons, located midway between the two islands in the Rivière des Mille Îles.

In 1872, the Masson family ordered the construction of a new dam near the location of the current historical one. However, this dam was rebuilt in cement in the year 1890 for reinforcement and increased resilience.

Nearly a century later, in 1972, the owner of the Île-des-moulins decided to destroy the dam with dynamite due to flooding risk. As a result, the dam underwent severe damage, prompting the city of Terrebonne to acquire the island and classify it as a protected historical site in 1973.

In 1979, the Ministère des Richesses naturelles du Québec ordered the reconstruction of the Moulin-Neuf dam, to which a pedestrian walkway is added to allow citizens, visitors, and tourists to walk from the Île-des-moulins to the larger Ile Saint-Jean. This new dam was built a certain distance away from the small Île aux moutons, making the dam significantly longer than the initial ones.

A picture of the Rivière des Mille Îles in Terrebonne, in which the Île Saint Jean the Île aux moutons and the Île-des-moulins can be seen from left to right, respectively. 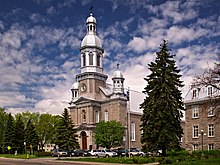 The Saint-Louis-de-France Church in Terrebonne

The current Saint-Louis-de-France Church built around the year 1878, the third since the foundation of the parish, was equipped with a Casavant organ in 1946.

In 1880, parish priest Piché, informally known as the bon monsieur Piché ("Good Mister Piché" in English), exhumed the bodies buried in the basement of the old church in order to place them in the crypt of the new one.

The Terrebonne Cobras are part of the QJHL.