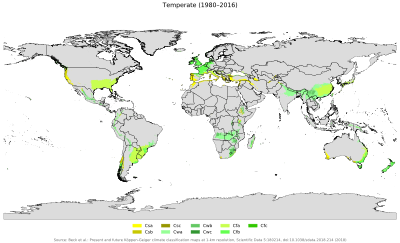 In geography, the temperate or tepid climates of Earth occur in the middle latitudes, which span between the tropics and the polar regions of Earth.[1] In most climate classifications, temperate climates refer to the climate zone between 35 and 50 north and south latitudes (between the subarctic and subtropical climates).

These zones generally have wider temperature ranges throughout the year and more distinct seasonal changes compared to tropical climates, where such variations are often small. They typically feature four distinct seasons, Summer the warmest, Autumn the transitioning season to Winter, the colder season, and Spring the transitioning season from winter back into summer. In the northern hemisphere, the year starts with winter, transitions in the first half year through spring into summer, which is in mid-year, then at the second half year through autumn into winter at year-end. In the southern hemisphere, the seasons are swapped, with summer between years and winter in mid-year.

In some climate classifications, the temperate zone is often divided into several smaller climate zones, based on monthly temperatures, the coldest month, and rainfall. These include humid subtropical climate, Mediterranean climate, oceanic, and continental climate.

These are the climates that are typically found at southernmost portion of the temperate zone between 23.5° and 35° north or south, and thus are far more influenced by the tropics than any other tepid climate type, usually having warmer temperatures over the year, longer summers and mild, short winters. Freezing precipitation is uncommon in this portion of the temperate zone.

On the winter solstice within this range of latitude, the sun still rises to an altitude of between 31.5 and 43 degrees above the horizon respectively thus contributing to the warmer winters however it does not quite reach the zenith (directly overhead) on the summer solstice hence the definition of being within the temperate zone. 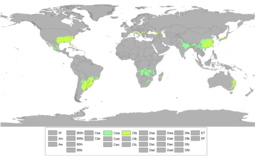 Regions where the Humid (Cfa) and Dry-Winter Subtropical (Cwa) climates are found.

Humid Subtropical climates generally have long, hot and humid summers with convective showers in summer and a peak seasonal rainfall in the hottest months. Winters are normally mild in the humid subtropics, and warm ocean currents normally are found in coastal areas with humid subtropical climates. This type of climate is normally located along leeward lower east coast continents such as in southeast and central Argentina, Uruguay and south of Brazil, the southeast portions of East Asia, the southern United States, South Africa, and eastern Australia. In some areas with a humid subtropical climate (most notably southeast China and North India), there is an even sharper wet-dry season, called subtropical monsoon or Cwa. In these regions, winters are quite dry and summers have very heavy rainfall. Some Cwa areas in southern China reported more than 80% of annual precipitation in the 5 warmest months (Southwest Monsoon).

Regions where the Dry Summer Subtropical or Mediterranean Climates (Csa, Csb) are found.

Mediterranean Climates, opposite to the humid subtropical and monsoonal climates, have a dry summer, with rainfall in the winter and cooler months. They occur mostly at the western edges and coasts of the continents and are bounded by arid deserts on their equatorward sides that cause the dry season of summer, and oceanic climates to the poleward sides that are influenced by cool ocean currents and air masses that bring the rainfall of winter. The five main Mediterranean regions of the world are the Mediterranean Sea basin in northwestern Afro-Eurasia, coastal California in the United States, the southwest of Argentina, the Western Cape of South Africa and the south and southwestern coast of Chile. 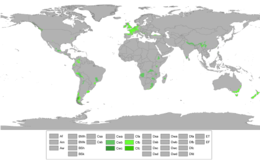 These occur in the middle latitudes, between 23°26'22" and 66°33'39" north, and 23°26'22" and 66°33'39" south and are the ones with the most of practically equal influence from the equator and the poles, and the most characteristic temperate climates with the typical distinct four season pattern. In these the temperatures remain relatively cool through most of the year as opposed to mild and warm in the subtropics and cold in the subpoles.

The oceanic climates are created by the onshore flow from the cool high latitude oceans to their west. This causes the climate to have cool summers and cool (but not cold) winters, and relative humidity and precipitation evenly distributed along the year. These climates are frequently cloudy, and are fairly milder both in winter and summer in comparison to other temperate climates. Annual rainfall is spread throughout the entire year. Regions with this climate include Northwestern Europe, Northwestern North America, southeastern and southwestern South America, southeastern Australia and most of New Zealand.

The continental climates, as opposed to the oceanic climates have strikingly extreme seasonal differences. With less moderating effect from ocean currents and more influence from tropical and polar large-size continental land air-masses they feature more extreme temperatures in each respective season, with summers getting as hot as those of subtropical or tropical climates and winters as cold as in subpolar climates. They are mostly found on the northern hemisphere, because this is where there is a large enough landmass to generate extremes in seasonal temperatures, however some areas of Patagonia experience continental climate as well. This climate type is found in northeast Asia, the north-central and north- eastern United States and southern Canada, and Eurasia, in eastern, central and northern Europe, in Patagonia and in mountains of Cuyo.

These are temperate climates that opposite to the subtropicals are on the poleward edge of the temperate zone, therefore still have four marked seasons including a warmer one, but are far more influenced by the poles than any other but the very polar climates (Tundra and Icecap).

Areas with subpolar oceanic climates feature an oceanic climate but are usually located closer to polar regions. As a result of their location, these regions tend to be on the cool end of oceanic climates. Snowfall tends to be more common here than in other oceanic climates. Subpolar oceanic climates are less prone to temperature extremes than subarctic climates or continental climates, featuring milder winters than these climates. This variant of an oceanic climate is found in parts of coastal Iceland, the Faroe Islands, parts of Scotland, northwestern coastal areas of Norway such as Lofoten and reaching to 70°N on some islands, uplands near the coast of southwestern Norway, the Aleutian Islands of Alaska and northern parts of the Alaskan Panhandle, some parts of Southern Argentina and Chile (though most regions still fall as continental subantarctic), and a few highland areas of Tasmania, and the Australian and Southern Alps. This type of climate is even found in the very remote parts of the Papuan Highlands in Indonesia. The classification used for this regime is Cfc. In the most marine of those areas affected by this regime, temperatures above 20 °C (68 °F) are extreme weather events, even in the midst of summer. Temperatures above 30 °C (86 °F) have been recorded on rare occasions in some areas of this climate, and in winter temperatures down to −20 °C (−4 °F) have seldom been recorded in some areas.

Mostly polewards of Humid Continental zones this climate features extremely cold and long winters, with short mild summers. In very small areas at high altitudes around the Mediterranean Basin, Iran, Kyrgyzstan, Tajikistan, Turkey, Alaska and other parts of the northwestern United States (Eastern Washington, Eastern Oregon and Southern Idaho) and Russian South-Eastern regions the climate is classified as Dsc with a dry summer climate, such as in Seneca, Oregon or Atlin, British Columbia. In the Southern Hemisphere it is found in southern Patagonia (cities like Rio Grande and Tolhuin). This is the closest to the polar climates of all four-season temperate climates, as practically all of the year is set up by extremely low temperatures, except for summer.

The vast majority of the world's human population resides in temperate zones, especially in the northern hemisphere, due to its greater mass of land.[6] The biggest described number in temperate region in the world is found in southern Africa, where some 24,000 taxa (species and infraspecific taxa) have been described, but the native fauna and flora of this region does not have much cultural importance for the majority of the human population of the world that lives in Temperate Zones and that live in the Northern Hemisphere, only environmental importance.[7]

Farming is a large-scale practice in the temperate regions (except for Boreal/Subarctic regions) due to the plentiful rainfall and warm summers, because most agricultural activity occurs in the spring and summer, cold winters have a small effect on agricultural production. Extreme winters or summers have a huge impact on the productivity of agriculture.[8]

Temperate regions have the majority of the world's population, which leads to large cities. There are a couple factors why the climate of large city landscapes differs from the climate of rural areas. One factor is the strength of the absorption rate of builds and asphalt, which is higher than natural land. The other large factor is the burning of fossil fuels from buildings and vehicles. These factors have led to the average climate of cities to be warmer than surrounding areas.[8]