Telewizja Polska S.A. (TVP, or Polish Television) is a Polish state media corporation.[1][2][3][4] It is the largest Polish television network, although it is currently the least trusted network in Poland due to its strong pro-government bias.[5] About a third of TVP's income comes from a broadcast receiver licence, while the rest is covered by government subsidies, commercials and sponsorships. 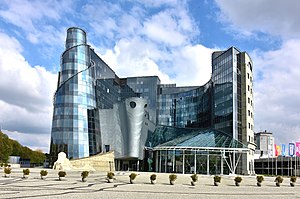 Bolded channels are accessible in Poland via DVB-T. TVP HD and TVP Seriale are pay television. TVP Polonia, TVP Info and TVP Historia are also available on DVB-T in Lithuania.

In the late 2010s, TVP has been criticized for becoming unduly biased towards the ruling Law and Justice (PiS) party.[8] In 2018, The Economist noted: "the [TVP] anchors... praise PiS slavishly while branding its critics treacherous crypto-communists.[9]

TVP was heavily criticised in the run-up to the 2020 Polish presidential election, being described as the "mouthpiece" of the government[10] and as "peddl[ing] government hate speech" by the organisation Reporters Without Borders.[11]

TVP has an agreement with the BBC, under which they will work together on film and television productions.[12]

The French-German TV liberal arts network ARTE cancelled a 15-year cooperation with TVP,[13] when it learned in February 2009 that TVP's general director, Piotr Farfał, was a member of the League of Polish Families, which opposed Arte’s "philosophy based on intercultural exchange"[14] and "the party that TVP's chairman is presently connected with does not share European values".[15] It was again cancelled in January 2016 after an amendment of the media law in Poland, which caused fears of a lack of pluralism and independence of TVP.[16]