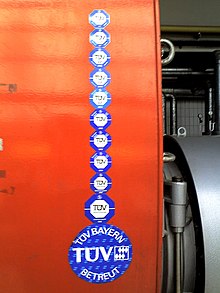 The TÜVs originated in Germany in the late 1800s during the Industrial Revolution, following the explosion of a steam boiler at a brewery in Mannheim in 1865. This led a group of engineers to found the first 'Dampfkessel Überwachungsverein' (DÜV, Steam Boiler Inspection Association) and soon similar associations were created in other German cities and these came together in an association in 1873.

In 1877 they issued the first standards for construction and maintenance of boilers, which became known as the "Würzburg standards". DÜVs took on inspection services for other technologies as they came into use, for example electrical safety testing and elevator inspection.

In 1906 the Grand Duchy of Baden issued regulations for vehicle inspection as well as drivers, and the local DÜV was given that responsibility. By 1938 there were 37 DÜVs, and they were reorganized and renamed into 17 TÜVs. In 1951 national regulation obligated people to have their cars inspected by TÜV every two years.[2]

The individual TÜVs became multinational corporations with time, and came to provide services to industry, governments, individuals, and non-profit groups.[3] During the 1980s and 1990s, deregulation led to competition in the German inspection and certification industry,[4] and further deregulation occurred at the end of 2007.[5]

In 2007, TÜV Nord and TÜV SÜD agreed to merge, which would have created a company with 18,000 employees and sales of around 1.8 billion euros; however the companies called off the merger that same year, citing potential difficulties with integration as well as restrictions that would have been required under antitrust law.[6] In 2008 TÜV SÜD and TÜV Rheinland agreed to merge which would have created the second largest testing services company in the world, behind SGS S.A.; the combined company would have had around 25,000 employees and 2.2 billion euros in income.[7] These plans were abandoned by August again due to antitrust concerns.[8] TÜV Nord had more than 11,000 employees stationed globally as of 2020.[3]

TÜVs function as notified bodies in Europe for medical device regulation.[9] In 2013, TÜV Rheinland was held liable by a French court to 1600 women whose breast implants had ruptured; the implants were made by Poly Implants Prothèses and TÜV Rheinland had certified the manufacturing process.[10][11] TÜV Rheinland had about 1.88 billion euros in revenue in 2015, with more than half generated outside Germany.[12]

TÜV SÜD was auditing and certifying Vale, a company that was involved in the 2015 Mariana dam disaster.[13] In 2019 the Brumadinho dam disaster occurred. In October 2019, five Brazilians who lost close family members there and two NGOs filed a law infringement complaint against TÜV SÜD, alleging that TÜV SÜD is jointly responsible for the deaths and environmental damage.[14] The company denies the allegations.[15]

On January 25, 2019, a recently inspected tailing dam collapsed, killing 270 people, of whom 259 were officially confirmed dead and 11 others reported as missing, whose bodies had not been found.[16] The Brumadinho dam disaster released a mudflow that advanced over houses in a rural area near the city. Brazilian authorities issued arrest warrants for two engineers of TÜV SÜD, contracted to inspect the dam.[17][18][19] Brazilian prosecutors announced, on January 21, 2020, that Vale SA, TÜV SÜD, and 16 individuals would be charged in relation to the dam disaster.[20]

In 2020 Brazilian prosecutors announced their plans to file charges against Vale SA and its auditor TÜV SÜD and many individuals.[21][22]