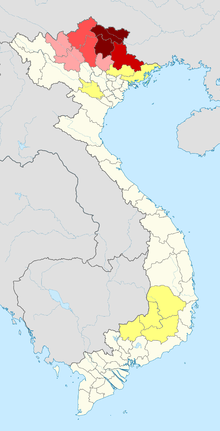 The Tày people speak a language of the Central Tai language group, and live in northern Vietnam. They are sometimes also called Thô, T'o, Tai Tho, Ngan, Phen, Thu Lao, or Pa Di.

There are about 1.7 million Tày people living in Vietnam (based on the 2009 census and 5 years of population growth). This makes them the second largest ethnic group in Vietnam after the majority Viet ethnic group. Most are in northern Vietnam in particular in the Cao Bằng, Lạng Sơn, Bắc Kạn, Thái Nguyên, and Quảng Ninh Provinces, where they live along the valleys and the lower slopes of the mountains. They also live in some regions of the Bắc Ninh and Bắc Giang provinces. They inhabit fertile plains and are generally agriculturalists, mainly cultivating rice. They also cultivate maize, and sweet potato among other things.

Tày villages are usually based at the feet of mountains and are often named after a mountain, field or river. Each village has about 15-20 households.

Because of their historical close proximity with the majority Viet, the Tày and Viet have some mutual influences with regards to arts and religion.[5]

The Tày are closely related to the Nùng and the San Chay in Vietnam and the Zhuang on the Chinese side of the Vietnamese-Chinese border.

The majority of the Tay practices Then, an indigenous religion involving the worship of tutelary gods, gods of the natural environment, and ancestors and progenitors of human groups.[2] The patterns of this religion are inherited from Taoism and the Chinese folk religion: the god of the universe is the Jade Emperor,[2] in some local traditions (for example in the Quảng Hoà district of Cao Bằng) also identified as the Yellow Emperor (Hoàng Đế).[2] For their religious ceremonies they used to be able to recite Chinese characters but now along with the characters they use glosses because many of them can't recite anymore due to the fact that Vietnam schools don't teach Chinese characters.[6]

An altar for the ancestors is usually placed in a central location in the house. The altar room is considered sacred; guests and women who have given birth are not allowed to sit on the bed in front of the altar.

Some Tay have adopted Mahayana Buddhism under the influence of Vietnamese and Chinese culture.[3]

Characters formerly used by the Tay people were added to Unicode in 2017. This one, U+2B86F, means "wealthy" and is romanized as giàu. It is a variant of 朝, the corresponding character in Vietnamese.[7]

The Tay people speak the Tày language, among other Tai dialects of the Kra–Dai languages. Literacy in their own language is quite low among Tày people, probably around 5% or less. Dialects include Central Tày, Eastern Tày, Southern Tày, Northern Tày, Tày Trung Khanh, Thu Lao, and Tày Bao Lac. There is a continuum of dialects to southern Zhuang in China.

Tay-ized Vietnamese among the Tay

A part of the modern-day Tay population encompasses Tay-ized Vietnamese who live mainly in what is now Lang Son. These Tay-ized Vietnamese have their origins traced back to the Vietnamese living further south in the deltas of the Ca, Ma, and Red Rivers, e.g. Nghe An, Nam Dinh, etc. dispatched to the Sino-Annamese border by Annamese imperial governments to serve as governmental officials and local leaders (phiên thần thổ ty).[8] These people were then forbidden to return to their home areas.[8] Eventually they got assimilated into the indigenous Tay surrounding population. Their common surnames include Vi, Nguyễn Đình, Nguyễn Khắc, Nguyễn Công, Hoàng Đức, Hoàng Đình, etc. This practice started in the 15th century and ended in the early 20th century. Vi Văn Định is an example of these Tay-ized Vietnamese in the 20th century.[9]