The tax horsepower or taxable horsepower was an early system by which taxation rates for cars were reckoned in some European countries such as Britain, Belgium, Germany, France and Italy; some American states like Illinois charged number plate purchase and renewal fees for passenger cars based on taxable horsepower. The tax horsepower rating was computed not from actual engine power but by a mathematical formula based on cylinder dimensions. At the start of the 1900s, tax power was reasonably close to power; as the internal combustion engine developed, power became larger than nominal taxable power by a factor of ten or more.

The so-called RAC horsepower rating was devised in 1910 by RAC at the invitation of the British government.[1] The formula was:

is the bore in cm and

is the number of cylinders[2]

The formula was calculated from total piston surface area (i.e., "bore" only). The factor of 2.5 accounts for characteristics that were widely seen in engines at the time, such as a mean effective pressure in the cylinder of 600,000 Pa and a maximum piston speed of 5 m/s.

The system introduced a somewhat progressive way of taxing higher-value cars more than lower-value but was also introduced to protect the domestic British motor industry from foreign imports, especially the Ford Model T. Henry Ford's mass production methods meant that the Model T was competitively priced with English-built cars despite being a much larger, more durable and more powerful car than other available similarly-priced models. In 1912, Ford opened a factory to build Model Ts in Manchester, to circumvent the import tariffs that, up to that point, had increased the effective price of foreign cars. Under the RAC's formula, the Model T was a 22 'tax horsepower' car, making it more expensive to run than its English-built rivals on sale for the same price.

At first, the RAC rating was usually representative of the car's actual (brake) horsepower, but as engine design and technology progressed in the 1920s and 1930s these two figures began to diverge, with engines making much more power than their RAC ratings suggested: by 1924 the 747 cm3 engine of the Austin Seven (named for its 7 hp rating) produced 10.5 brake horsepower, 50% more than its official rating. 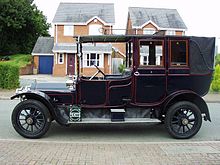 It was common for the name of a model to include both its RAC tax horsepower and its actual power output, such as the Wolseley 14/60 and the Alvis 12/70 of 1938.

To minimise tax ratings, English designers developed engines with very long stroke and low piston surface area. Another effect was the multiplicity of models: Sevens, Eights, Nines, Tens, Elevens, Twelves, Fourteens, Sixteens etc. each to fit with a taxation class.[3] Larger more lightly stressed engines may have been equally economical to run and, in less variety, produced much more economically. The system discouraged manufacturers from switching to more fuel-efficient overhead valve engines as these generally required larger bores, while the established sidevalve layout could easily use very narrow bores. Despite OHV engines having significant benefits in economy, refinement and performance, the RAC system made these engines more expensive to own because it placed them in a higher tax class than sidevalve engines of identical power output.[3] Despite this, by 1948 the Standard Flying Twelve, a typical mid-size saloon, produced 44 bhp (45 PS; 33 kW) from a 1.6 dm3 engine, nearly four times as much horsepower as the RAC system suggested.

While the RAC system had protected the home market from the import of large-engined, low-priced mass-produced American cars, the need for roomy generously proportioned cars for export was now paramount and the British government abandoned the tax horsepower system[1] with effect from 1 January 1947[4] replacing it at first with a tax on cubic capacity, which was in turn replaced by a flat tax applying from 1 January 1948.[5] However British cars and cars in other countries applying the same approach to automobile taxation continued to feature long, relatively narrow cylinders even in the 1950s and 1960s, partly because limited investment meant that new car models often had new bodies but their engines were carried over from earlier generations.

The emphasis on long strokes, combined with the nature of British roads in the pre-motorway era, meant that British engines tended to deliver strong low- and mid-range torque for their size, but low maximum speeds. The long stroke also meant that piston speeds and the load on the big end bearings became potentially damaging at high power outputs. Many smaller British cars did not cope well with sustained cruising at 60 mph (97 km/h) or more, which led to reliability problems when the vehicles were exported to other markets, especially the United States. Cars such as the Austin A40, the Morris Minor and the Hillman Minx all achieved notable initial sales success in the US in the late 1940s, until the short service life of the engines when asked to routinely drive long distances at freeway speeds became clear. Other imports originating in countries with different tax rules and existent high speed road networks, in particular the Volkswagen Beetle, proved more reliable, and achieved greater sales success.[3]

Although tax horsepower was computed on a similar basis in several other European countries during the two or three decades before the World War Two, continental cylinder dimensions were quoted in millimetres. As a result of roundings when converting the formula between the two measurement systems, a British tax horsepower unit ended up being worth 1.014 continental (i.e. French) tax horsepower units.[1]

In Belgium, the tax power depended on the cubic capacity of the engine in cubic centimetres at the rate of 1 tax horsepower for every 200 cm3.

The Cheval fiscal, often abbreviated to CV from "chevaux-vapeur" (literally 'steam horses') in tax law, is used for the issuing of French registration certificates known as "grey cards" (cartes grises). It is an administrative unit originally calculated partly from the power of the engine and used to calculate the amount of tax that may be due at the time of registration.

The Citroën 2CV (two tax horsepower) was the car that kept such a name for the longest time.

It was originally defined using the following formula:

In a circular issued on 28 December 1956, the chevaux fiscaux was defined as:

The result is multiplied by 0.7 for a diesel engine.

A new system was announced on 23 December 1977 to come into force on 1 January 1978, calculated by the following formula:

Since July 1998, the fiscal tax has depended on a standardised value of CO
2 emissions in g/km and the maximum engine power in kW. If C is the amount of CO
2 released and P the engine power, then:

is expressed in horsepower, rounded to the nearest integer. The official emission rate of CO
2 included in the calculation is taken from the European certificate of conformity.

Tax horsepower (Steuer-PS) was introduced in Germany on 3 June 1906. However, in contrast to many regions, i.e. English and French tax horsepower formulae above, it was calculated based on the overall engine displacement from its implementation.

The formula for tax horsepower was as follows:

Incomplete fractions were rounded up to the nearest whole number so a four stroke engined car of 1 dm3 would end up designated as 4 tax horsepower.

After April 1928, recognizing the logic of the linear relationship between tax horsepower and engine capacity, the authorities simply set car tax rates according to engine size for passenger cars. For commercial vehicles, vehicle tax became a function of vehicular mass. Attempts to correlate new tax horsepower values with old ones result in small differences due to roundings used in the new formula which are, for most purposes, unimportant.

After Hitler became Führer in 1933, identified promotion of the auto-industry as key to economic recovery: new cars purchased after April 1933 were no longer burdened by an annual car tax charge[7] and German passenger car production surged from 41,727 in 1932 to 276,804 in 1938. Thereafter war and military defeat led to a change in car tax policy and after 1945 tax horse-power returned in West Germany, applying the 1928 formula, as a determinant of annual car tax on new cars purchased in or after 1945. However, the introduction of tax on road fuel in 1951 and progressive increases in fuel tax thereafter reduced the importance of annual car tax so that today far more of the tax on car ownership is collected via fuel taxes than via annual car tax.[8]

Fiscal horsepower also lives on in Spain, but is defined simply in terms of overall engine capacity. It therefore encourages small engines, but does not influence the ratio of cylinder bore to stroke. The current Spanish definition does, however, add a factor that varies in order to favour four-stroke engines over two-stroke engines.

i is the number of cylinders,
d is the diameter (or bore) of the cylinder in cm
S is the piston stroke in cm[9]

The limits between the horsepower denominations were drawn at either 0.49, 0.50, or 0.51 in different cantons. Thus, the eight horsepower category would cover cars of about 7.5–8.5 CV. In 1973 Berne switched to a taxation system based on vehicle weight, and a few other cantons followed. In 1986 Ticino switched to a system based on a calculation including engine size and weight.[9] Nonetheless, the tax horsepower system remains in effect for seven cantons as of 2007[update]. The plethora of different taxation systems has contributed to there always being an uncommonly wide variety of different cars marketed in Switzerland.

Impact on ICE design and development

The fiscal benefits of reduced cylinder diameters (bore) in favor of longer cylinders (stroke) may have been a factor in encouraging the proliferation of relatively small six-cylinder-engined models appearing in Europe in the 1930s, as the market began to open up for faster middle-weight models.[1] The system clearly perpetuated side-valve engines in countries where the taxation system encouraged these engine designs, and delayed the adoption of overhead valve engines because the small cylinder diameter reduced the space available for overhead valves and the lengthy combustion chamber in any case reduced their potential for improving combustion efficiency.

Another effect was to make it very expensive to run cars imported from countries where there was no fiscal incentive to minimise cylinder diameters: this may have limited car imports from the US to Europe during a period when western governments were employing naked protectionist policies in response to economic depression, and thereby encouraged US auto-makers wishing to exploit the European auto-markets to set up their own dedicated subsidiary plants in the larger European markets.

Taxation can modify incentives and tax horsepower is no exception. Large capacity (displacement) engines are penalized, so engineers working where engine capacity is taxed are encouraged to minimize capacity. This rarely happened in the US, where license plate fees, even adjusted for horsepower ratings, were comparatively much lower than European car taxes.