The Tatra T815 is a truck family, produced by Czech company Tatra. It uses the traditional tatra concept of rigid backbone tube and swinging half-axles giving independent suspension. The vehicles are available in 4x4, 6x6, 8x8, 10x8, 10x10, 12x8 and 12x12 variants. There are both air-cooled and liquid-cooled engines available with power ranging from 230–440 kilowatts (310–590 hp). As a successor to Tatra T813 it was originally designed for extreme off-road conditions, while nowadays there are also variants designated for mixed (both off- and on-road) use.

The T815 and its descendant models took the Czech truck racer Karel Loprais to victory six times in the Dakar Rally.

Designed to eventually replace T148 the prototype T157 was introduced in 1970 and several more prototypes were designed between 1970 and 1974 period but no production resulted. Due to protests from another Czechoslovak manufacturer LIAZ which was assigned by the government central planning committee to manufacture trucks of similar class Tatra dropped the T157 and instead started to concentrate on a heavier class as the replacement for T813 and T148 which was introduced in 1983 as T815 series. In 1989 Tatra modernized T815 series and introduced new T815-2 which received further upgrade in 1994 and just 3 years later in 1997 the new cabin TerrN°1 is introduced. Another facelift followed in 2000 where changes included among others new instrument panel and cab attachment and for the first time there is an option for fitment of liquid-cooled engines. The latest facelift of cabin came in July 2010. Due to emission requirements changes in 2003 Tatra developed all new V8 engine T3C to comply with Euro III where it followed the tradition once again with its air cooling design. The further developed T3D engine was introduced in 2006 with its SCR and Euro IV compliance.[4]

While most other manufacturers derive their trucks from road applications, Tatra T815 was purposely designed for extreme off-road conditions, and its road versions are derived from the off-road original concept. The principle consists in a central load-carrying tube with independently suspended swinging half-axles bolted as one whole. This gives Tatra vehicles outstanding driving qualities in the most difficult terrains. The concept allows higher off-road speed compared to classical rigid axle design.

The primary structural feature of Tatra trucks is the central load carrying tube, also called a backbone frame. All other parts of the truck are mounted to this rigid assembly. The inherently high torsional and flexural rigidity of this layout protects superstructures from the motions and forces on the axles. Torque distribution to the axles is also carried within the backbone.[5]

Tatra differentials[6] are a unique design that uses two opposing spiral bevel gears instead of the usual single set. The differential gears are part of the input drive shaft rather than between the output axles as in a conventional differential. All versions of the Tatra differential have locking pins that can force the differential gears to rotate together, "locking" the differential. This arrangement had two distinct advantages. The first is that the dual output bevel gears allow the axles to swing around the drive axle without the need for universal couplings. The second is that the input drive shaft goes essentially straight through the differential housing, allowing simple coupling to a second set of swing axles. This modular design enables configurations of 2, 3, 4, 5, or even 6 axles with all axles driven. The whole assembly is part of the backbone frame.

All suspension types are equipped with telescopic shock absorbers; some versions also have stabilizer torsion bars.

The Tatra engine[1] is an air-cooled, OHV, currently 12.7 litre 90° V8 120 x 140 mm diesel engine with direct fuel injection. It is turbocharged by one Holset WasteGate turbocharger, and equipped with an intercooler placed directly over the engine. The engine is equipped with a mechanically controlled in-line Bosch injection pump. Its roller crankshaft bolted together from individual segments belongs among unique technical solutions. The engine is available in emission specifications Euro 2 - Euro 5 with power output ranging from 230 to 325 kilowatts (308 to 436 hp) and 1,400–2,100 N⋅m (1,000–1,500 lbf⋅ft) torque. At its launch, the T815 could alternatively be delivered with a larger powertrain. Available options, all of which were from Tatra's own range of engines, included the air-cooled V10 (15.8 litre) and V12 (19 litre), both without turbo and intercooler, and a V12 bi-turbo. When the Euro 1 emission limits came into effect, the larger engine alternatives became unavailable.

Tatra T815 is equipped with own Tatra-produced COE cab.[9] There is basic version, extended version with room behind seats used for a berth and especially for fire-fighting applications a long four-door cab enabling transportation of up to six persons.

There is also special low cab version used mostly for cranes and other special applications. The cab is situated in front of the front axle.

All versions for all applications are sold in countries of Central and Eastern Europe as well as in Germany and France. In Central Europe the trucks are used mostly by construction companies, logging companies and mining companies. They are notably popular as fire-fighting engines. In far eastern Russia the Tatra Trucks are used by oil and gas companies in the most difficult terrains, where the air-cooled engine has advantages over water-cooled ones during harsh winter time.

T815 is exported to the United States and Brazil. It used to be marketed under mark "American Truck Company" in the United States, where T815 and T815-6 Force is used as heavy fire-fighting engine.

There is assembly line of Tatra vehicles in India.

T815 is available also in some African and Asian countries 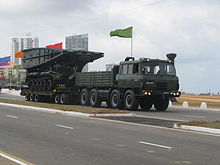