Of the routes the airport offers, the domestic Ho Chi Minh City - Hanoi route is the busiest in Southeast Asia and the sixth busiest in the world, serving 6,867,114 customers in 2018.[5]

Tan Son Nhat International Airport has its origins in the early 1930s when the French colonial government constructed a small airport with unpaved runways, known as Tân Sơn Nhứt Airfield near the village of Tan Son Nhut. By mid-1956, with U.S. aid, a 7,200-foot (2,190 m) runway had been built; the airfield near Saigon became known as South Vietnam's principal international gateway. During the Vietnam War (or Second Indochina War), Tan Son Nhut Air Base (then using the alternative spelling Tân Sơn Nhứt) was an important facility for both the U.S. Air Force and the Republic of Vietnam Air Force. Between 1968 and 1974, Tan Son Nhut Airport was one of the busiest military airbases in the world. Pan Am schedules from 1973 show that during the last days of South Vietnam, Boeing 747 service was being operated four times a week to San Francisco via Guam and Manila.[6] Continental Airlines operated up to 30 Boeing 707 military charters per week to and from Tan Son Nhut Airport during the 1968–74 period.[7]

Board of welcoming at Tan Son Nhat International Airport, 1967

In 2006, Tan Son Nhat International Airport served approximately 8.5 million passengers (compared with 7 million in 2005) with 64,000 aircraft movements.[9] It has recently accounted for nearly two-thirds of the arrivals and departures at Vietnam's international gateway airports.[10][11] Due to increasing demand (about 15–20% per annum), the airport has been continuously expanded by the Southern Airports Corporation.[11]

In 2010, Tan Son Nhat domestic terminal handled 8 million passengers, its maximum capacity. The airport reached its full capacity of 20 million passengers in 2013, two years earlier than predicted. Both domestic and international terminal are being expanded to meet the increasing demand. In December 2014, expansion for the domestic terminal was finished, boosting the terminal's capacity to 13 million passengers per annum.[12] In September 2017, People's Army of Vietnam ceded 21 hectare of military land in the vicinity of the airport to Airports Corporation of Vietnam for civil use. This gave way for the construction of 21 new aircraft parking spaces, expected to be completed by Tet holidays in 2018. Tan Son Nhat will then have 72 parking spaces for airplanes.[13]

Of the routes the airport offers, the Ho Chi Minh City - Hanoi route is the busiest in Southeast Asia and the seventh busiest in the world, serving 6,769,823 customers in 2017.[14]

A new international terminal funded by Japanese official development assistance and constructed by a consortium of four Japanese contractors (KTOM, abbreviation of four contractors' names: Kajima – Taisei – Obayashi – Maeda), opened in September 2007 with an initially designed capacity of 10 million passengers a year.[15] In 2014, the terminal served over 9 million international passengers[16] and a demand of an expansion to the terminal was in sight. The first phase of an urgent expansion to the terminal was finished in December 2016 with an addition of 2 new jet bridges and other facilities.[17] Upon the completion of phase two, the terminal can handle 13 million passengers annually.[18]

Following the opening of its new international terminal in September 2007, Tan Son Nhat has two major terminal buildings with separate sections for international and domestic flights.

The Prime Minister of Vietnam, by Decision 1646/TTg-NN, has approved the addition of 40 hectares (99 acres) of adjacent area to extend the apron and to build a cargo terminal to handle the rapid increase of passenger (expected to reach 17 million in 2010, compared to 7 million and 8.5 million in 2005 and 2006 respectively) and cargo volume at the airport.[10][19] 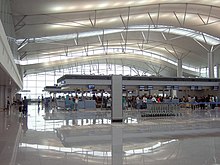 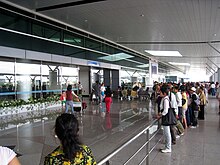 A bus station is situated in front of the international terminal and is served by Ho Chi Minh City Bus. It is connected to the city center by bus line 109 and 152 as well as shuttle bus line 49. Connecting the airport to Vung Tau and other cities in Mekong Delta are express minibus services as well as bus line 119 (via Mien Tay Bus Station).[55]

The airport is expected to be served by Ho Chi Minh City Metro Line 4B, connected to Line 4 and 5 with services to the southern and eastern area of the city. However, it is currently not known when the line will be constructed.[56]

Until 2016, the airport only had one main access route via Truong Son Street, which caused chronic congestion for traffic going in and out of the airport. As an effort to ease traffic bottleneck, in August 2016, Pham Van Dong Boulevard officially opened and connected the airport to National Route 1A in an intersection east of the airport.[59]

Throughout its history there have been several incidents that happened at the airport, some of the most notable are summarized below:

Tan Son Nhat International Airport is located inside the crowded urban core of Ho Chi Minh City, making expansions difficult. In a report submitted to the Vietnamese National Assembly in 2015, legislators deemed continued expansion of Tan Son Nhat problematic in five aspects. Firstly, it would be more economically viable to build a new airport rather than extensively upgrade Tan Son Nhat. An estimated US$9.1 billion was reportedly needed for a new 4,000 m runway, a new passenger terminal and other facilities at Tan Son Nhat. Secondly, Tan Son Nhat airspace overlaps with that of Bien Hoa Airport, which is currently reserved for national defense purpose. A reduction in military activities in Bien Hoa is considered to be temporary and unsustainable. At the same time, Tan Son Nhat also acts as a strategic location in national defense; therefore, the airport cannot be used entirely for civic air transport. Additionally, due to its urban location, aside from increasing ground traffic stress in its access points, the airport cannot operate between midnight and 5AM in accordance to the International Civil Aviation Organization sustainable development goals, further limiting its capability.[65]

Following Decision 703/QĐ-TTg by the Vietnamese Prime Minister in July 2005, a new airport—Long Thanh International Airport—was planned to replace Tan Son Nhat airport for international departure use.[66] The initial master plan for the new airport was publicly announced in December 2006.[67] The new airport will be built in Long Thành District, Đồng Nai Province, about 40 km (25 mi) east of Ho Chi Minh City and 65 km (40 mi) north of the petroleum-focused city of Vung Tau, near Highway 51A.

According to the approved modified plan in 2011, Long Thanh International Airport will be constructed on an area of 50 square kilometers (19 sq mi), and will have four runways (4,000 m x 60 m or 13,100 ft x 200 ft) and be capable of receiving the Airbus A380. The project will be divided in three stages. Stage One calls for the construction of two parallel runways and a terminal with a capacity of 25 million passengers per year, due to be completed in 2020. Stage Two is scheduled for completion in 2030, giving the airport three runways, two passenger terminals and a cargo terminal designed to receive 1.5 million metric tons of cargo and 50 million passengers per year. The final stage is scheduled to be initiated after 2035, envisioned to handle 100 million passengers, 5 million metric tons of cargo annually on an infrastructure of 4 runways and 4 passenger terminals. The total budget for the first stage alone was estimated to be US$6.7 billion.[66]

Because Long Thanh will not be ready for service until at least 2025, Tan Son Nhat must expand to meet the increasing demand. In January 2017, Airport Design and Construction Consultancy (ADCC) presented 3 proposals to expand the airport. Vietnam's Deputy Prime Minister Trịnh Đình Dũng agreed to proceed a US$860 million upgrade proposal for final review before submitting to the government. Under the chosen proposal, there would be a new mixed-use Terminal 3 and a civil-use Terminal 4 (to be built on the south side of the airport), a parallel taxiway between the existing runways and technical hangars on the northeast. The estimated time to complete the upgrade would be 3 years and the airport would then have a capacity of 43-45 million passengers annually.[68] The decision was controversial due to the fact that the golf course immediately north of SGN would remain untouched despite the urgent need of airport expansion.[69] The Minister of Transport Trương Quang Nghĩa explained that the airport could not be expanded northward due to costs and environmental impact.[70] On 12 June 2017, Prime Minister Nguyễn Xuân Phúc requested the Ministry of Transport to research the prospect of constructing a third runway at Tan Son Nhut International Airport. The French consulting company ADP Ingénierie (ADPi) was subsequently hired to provide a second opinion for the project.

In March 2018, ADPi presented their plan for the expansion. The firm advised against the construction of a third runway and supported a southward expansion plan. Without a new runway, Tan Son Nhut has a maximum capacity of 51 million passengers per year - a number ADPi predicted SGN to reach in 2025, in time for the opening of Long Thanh.[71] However, an independent consultancy of Ho Chi Minh City believed it could reach up to 80 million by the time Long Thanh was supposed to open, in accordance with reports by Boeing or the International Air Transport Association. As such, they proposed a three-phase northward expansion plan that would see a new runway and two new terminals to increase the airport's capacity to 70 million passengers per year.[72]

On 28 March 2018, Prime Minister Nguyễn Xuân Phúc ultimately selected the ADPi proposal as the basis for the expansion of the airport. This proposal includes a new Terminal 3 with a designed capacity of 20 million passengers per year south of Runway 07R/25L, additional facilities in the north area where a golf court currently occupies as well as improvements and constructions of access points for the airport.[73]