Tamaulipas Tampico metropolitan area Pánuco River
This article is about the city in Mexico. For other uses, see Tampico (disambiguation).
City in Tamaulipas, Mexico

Tampico is a city and port in the southeastern part of the state of Tamaulipas, Mexico. It is located on the north bank of the Pánuco River, about 10 kilometers (6 mi) inland from the Gulf of Mexico, and directly north of the state of Veracruz. Tampico is the fifth-largest city in Tamaulipas, with a population of 314,418 in the city proper and 929,174 in the metropolitan area.

During the period of Mexico's first oil boom in the early 20th century, the city was the "chief oil-exporting port of the Americas" and the second-busiest in the world, yielding great profits that were invested in the city's famous architecture, often compared to that of Venice and New Orleans.[2] The first oil well in Mexico was drilled near Tampico in 1901 at Ébano.

In 1923, Mexico's largest oil field (located very close to Tampico) dried up, leading to an exodus of jobs and investment, but economic development in other areas made the city a pioneer in the aviation and soda industries. The city is also a major exporter of silver, copper, and lumber, as well as wool, hemp, and other agricultural products. Containerized cargo is mainly handled by the neighboring ocean port of Altamira. 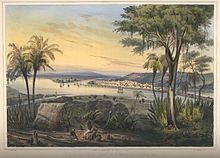 The name "Tampico" is of Huastec origin, tam-piko meaning "place of otters" (literally "water dogs"). The city is surrounded by rivers and lagoons of the delta of the Pánuco River, which was the habitat of a large population of otters. There have been successive human settlements in the area for centuries. The region had several early Huastec settlements, among them the important site at Las Flores, which flourished between AD 1000 and 1250.

In 1532, during the Spanish colonial period, the Franciscan priest Andrés de Olmos established a mission and monastery in the area, building over a former Huastec village. At his request, Spanish officials founded a settlement named San Luis de Tampico in 1554. This site was abandoned in 1684, and the population relocated to the south of the Pánuco River because of frequent attacks by European and American pirates. The area was abandoned for nearly 150 years.

The present Mexican city was founded on April 13, 1823 on the north bank of the Pánuco River about 10 kilometers (6 mi) from the Gulf, after Mexico achieved independence from Spain. Tampico built its economy on the exportation of silver; business development was mostly as a trading center and market town of an agricultural region. The town also became a common waypoint for the re-routing of African slaves to be illegally smuggled into the Southern United States, which had outlawed the international slave trade in 1807.[3] In August 1829, Spain sent troops from Cuba to invade Tampico in an effort to regain control of the region, but in September, General Antonio López de Santa Anna forced the Spanish troops to surrender, and Mexican control of Tampico was reestablished.[4]

The first oil well in Mexico was drilled near Tampico at Ébano S.L.P. in 1901, by Californian Edward Doheny, who founded Mexican Petroleum Corporation.[5] In the early 20th century, there was extensive U.S. investment in oil development in Tampico, with a sizable United States expatriate community developing in relation to the industry. With the outbreak of the Mexican Revolution, which lasted roughly from 1910 to 1920, the U.S. monitored the situation to protect its citizens and investments. Doheny sold some of his businesses to the Standard Oil Company which operated its monopoly here. The oil-producing area was so productive it was called the "Golden Belt."[5]

The oil fields known as Ébano, Pánuco, Huasteca, and Túxpan are all situated within a 160-kilometer (99 mi) radius of the city. Oil was often shipped on barges along the rivers. To improve transportation of oil to the port, the government built the Chijol Canal, beginning in 1901. It is 1.8 m (6 ft) deep and 7.6 m (25 ft) wide and runs 120 km (75 mi) southward through the oil fields to Túxpan.[3]

During the Mexican Revolution, on April 9, 1914, 10 Mexican troops and nine U.S. Navy sailors from the USS Dolphin confronted each other in a failure to communicate as U.S. forces tried to get fuel supplies. General Victoriano Huerta's forces in the city were threatened by different groups from both north and south. The Americans were arrested and later freed, but the U.S. resented Huerta's demands for some recognition. In the resulting Tampico Affair, the U.S. sent naval and marine forces into Veracruz and occupied the city for seven months in a show of force. Due to resulting anti-American demonstrations on each coast, other U.S. Navy ships were used to evacuate some American citizens to refugee camps in southern U.S. cities. The U.S. occupation contributed to the downfall of Huerta, and Venustiano Carranza became president. He ensured that Mexico maintained neutrality during World War I, in part due to lingering animosity against the U.S. for these actions.

In the 1970s, Tampico annexed the port city and suburb of Ciudad Madero, which now comprises part of the Tampico metropolitan area. Tampico has a modern port with excellent facilities, as well as rail and air connections to Mexico City and the United States.[3]

The Mexican government nationalized the oil industry in 1939 and has maintained that for 75 years. In November 2014, President Enrique Peña Nieto announced a policy change of ending Pemex's monopoly and inviting private companies back into the oil and gas industry. While analysts believe the largest finds are likely to be offshore, new techniques may yield oil even at mature fields such as those of Tampico.[5] In early 2015, the government planned to accept bids on 169 blocks, 47 of which are within 110 kilometers (70 mi) of Tampico.[5] It is expected that smaller companies will be active in the mature fields, such as those in this region. This area has extensive shale oil deposits, and the "U.S. Energy Information Administration estimates that Mexico has the world's eighth-largest shale-oil resources."[5] 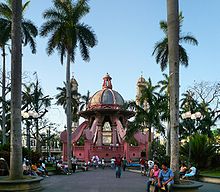 Tampico's downtown architecture is an eclectic mix, reflecting the growth of the city during the Porfiriato (the period of rule by President and dictator Porfirio Díaz). During the oil boom of the first decades of the 20th century, much "grandiose" architecture was built, inviting comparisons with Venice, Italy, and New Orleans in the United States.[2] Many buildings feature wrought-iron balconies (in the 20th century, these were mostly built of English cast iron). Similar balconies are characteristic of the French and Spanish-influenced architecture in New Orleans. Some of the balconies in Plaza de la libertad bear the original plaques showing their manufacture at the Derbyshire forge of Andrew Handyside and Company.

Notable buildings include the neoclassical Town Hall (or Palacio Municipal) in Plaza de Armas, and the English redbrick Customs House in the docks. The prevalence of New Orleans-style architecture is attributed to the oil boom years. Not only was there money to spend, but many building supplies, including pre-built housing components, were shipped from New Orleans to this area during that period of rapid development. The historical downtown areas of Plaza de Armas and Plaza de Libertad have been restored and improved in recent years to emphasize their historic appeal, in part to encourage more heritage tourism.

The Cathedral of Tampico, also known as the Temple of the Immaculate Conception, located in Plaza de Armas, dates to the late 19th century. It has undergone several restorations. It is of the neoclassical style in light brown canter, with Corinthian-style columns and three enormous doors that form the entrance. Its two towers are made of three bodies. The eastern one has a large, London-made, public chiming clock, a gift from Don Angel Sainz Trapaga. Its recently refurbished interior holds several wall paintings and other works of art. The altar is of white Carrara marble. The United States oil tycoon Edward Doheny of California, who drilled the first oil well in Mexico near Tampico, donated substantial funds for the cathedral's construction and maintenance after 1902, when he based his Mexican oil operations in Tampico.

According to the INEGI 2010 census, the population of the city of Tampico was 297,284, and that of the municipality of Tampico was 297,554, both ranking fifth in the state of Tamaulipas. The population of the Tampico—Ciudad Madero—Altamira metropolitan area was estimated at 859,419 people in 2010. The municipality has an area of 92.73 square kilometres (35.80 sq mi).[6] 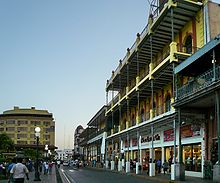 Tampico has a tropical savanna climate, in the Köppen climate classification is defined as Aw based on the mean average temperature of 18 °C (65 °F) for January as well as on precipitation patterns.[7][8] Its weather, though reasonably pleasant in spring and autumn, is hot in the summer; the average high reaches 32 °C (90 °F) in August, with an average low of 23 °C (74 °F). Winters are pleasantly cool; the average January high is 23 °C (73 °F) and the average low in January is 13 °C (58 °F). Rainfall is frequent from May through September.

Tampico is an extremely humid city, with summer heat indices reaching 40 °C (104 °F). It is located on the Pánuco River and among extensive wetlands adjacent to the Gulf of Mexico. During autumn and winter, it is affected by cold fronts that pass through the gulf and bring high winds that can reach 50 km/h (37 mph) with gusts of 70 to 80 km/h (43 to 50 mph). Tampico is also located in a hurricane area, but it has not been directly affected by one in more than 50 years.

On rare occasions, the city experiences surprisingly low temperatures for its zone; during late January and early February 2011, a cold wave caused temperatures to drop to 5 °C, with the lowest being 0 °C in the morning and noon of 4 February. In February 1895, snow was reported to have fallen in Tampico. This is the North American record for the furthest south report of snow at a coastal location, and makes Tampico one of the few places that snow has fallen in the tropics at sea level.[9]

The metropolitan area of Tampico, Ciudad Madero, and Altamira is served by General Francisco Javier Mina International Airport (IATA airport code: TAM), which is located in the northern part of the city of Tampico. It serves routes to Mexican cities, mainly Mexico City and Monterrey, and also has international services, with daily flights to Houston, Texas.

The city also has excellent railway facilities serving the port, which is well-developed with warehouses and equipment for loading oil tankers. Major roads connect to the Pan-American Highway.[3]

Tampico is known for its great food. Seafood is important in the city. The locals are informally known as Jaibas (crabs), and the crab emblem is seen in many places, from sports logos to the sides of buses to park benches. There are also typical dishes of the area, mainly the "torta de la barda" which is a sandwich that contains over 12 toppings, and the famous "tampiquena" which is steak with refried beans and "entomatadas" (tortillas with tomato sauce and cheese).

The Autonomous University of Tamaulipas has one of its two largest campuses in Tampico, the other being in Ciudad Victoria. The major schools of medicine, engineering, nursing, dentistry, architecture, and business are based here.

Multiple high schools, both private and public, are located in Tampico.

The local professional football team, Tampico Madero F.C., was founded in 1945 and is also known as La Jaiba Brava. They currently play in the Ascenso MX, the second tier of the Mexican football league system, and their home stadium has been the 19,415-seat Estadio Tamaulipas since 1966.

In 1953, Tampico Madero was champion of the México Primera División and also won the Campeón de Campeones title. La Jaiba Brava won consecutive Copa México titles in 1960 and 1961. The club spent most of the 1960s and 1970s in relegation but returned to the Primera División for the 1977–78 season. They finished runner-up twice in the shortened 1985 and 1986 Primera División tournaments under Chilean manager Carlos Reinoso before being relegated again in the early 1990s.