Tabaré Ramón Vázquez Rosas (Spanish pronunciation: [taβaˈɾe raˈmom ˈbaskes ˈrosas]; born 17 January 1940) is a Uruguayan politician who served as the 41st President of Uruguay from 2015 to 2020. He previously served as President from 2005 to 2010 as the 39th officeholder. A physician (oncologist), he is a member of the leftist Broad Front coalition.

Born in the Montevideo neighbourhood of La Teja, Tabaré Vázquez studied medicine at the Universidad de la República Medical School, graduating as an oncology specialist[1] in 1972. In 1976, he received a grant from the French government, allowing him to obtain additional training at the Gustave Roussy Institute in Paris.

From 1990 to 1995, Vázquez was the Frente Amplio coalition's first Mayor of Montevideo. In 1994, he made an unsuccessful run for president as the Frente Amplio candidate, receiving 30.6% of the vote. He actually finished with the most votes of the candidates in the field, more than 120,000 votes ahead of the next-highest vote-getter, former president Julio Maria Sanguinetti of the Colorado Party. However, under the multi-candidate Ley de Lemas system then in effect, Sanguinetti won the election, since he was the highest-finishing candidate of the party winning the most votes. Still, Vázquez turned in the best showing of a third-party candidate since the restoration of the presidential system in 1967; he only had 12,100 fewer votes than the combined vote of the second-place National Party.

In 1996, he was elected leader of the Frente Amplio, replacing the historic leader of the left-wing coalition, Liber Seregni. He ran again in 1999, the first election held after Uruguay scrapped the multi-candidate system. He led the field in the first round, with 40.1 percent of the vote. He lost to Jorge Batlle of the Colorado Party in the runoff, taking 45.9 percent of the vote. 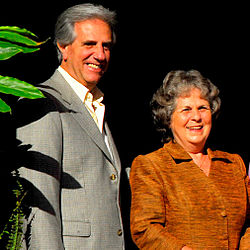 Vázquez was married to María Auxiliadora Delgado from 1968 until her death in 2019. They had three biological children together (Ignacio, Álvaro and Javier) and an adopted son (Fabián). 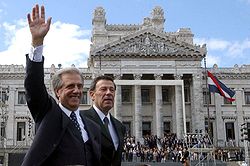 In the 2004 elections, he won 50.45% of the valid votes, with 1,124,761 votes on the first ballot—enough to win the presidency in a single round. To date, he is the only president since the institution of a two-round system in 1999 to win without the need for a runoff.

He took office in early 2005. He became the first Uruguayan president from a left-wing party, and thus the first one since the 1830s who was not a member of the National (Blanco) and Colorado parties.

With his own Broad Front holding a majority in Parliament, Vázquez was thought to have few obstacles to start with. He also had the support of the President of Brazil, Luiz Inácio Lula da Silva, likewise a centre-left democratic socialist.

Vázquez is a notable football fan. During his ten-year stint (1979–1989) as president of the Club Progreso team, it won the professional national championship (for first and only time) in 1989.

Among the most complex issues that have dominated his administration is an ongoing conflict with Argentina over potential contamination from pulp mills being built on the Uruguayan side of the Uruguay River.

Vazquez has tried to create new commercial and cultural links outside the region. Vazquez was the first Uruguayan President to visit New Zealand and South Korea, and has established contacts with other countries in Southeast Asia. While he maintained cordial relations with the United States, hosting U.S. President George W. Bush, Vázquez did not sign Bush's failed Free Trade Area of the Americas.[2]

In June 2008 President Vázquez visited Cuba.[3] While in Cuba, Vázquez and the Presidential party engaged in a number of high-profile events, including a summit with President Raúl Castro.[4]

This visit attracted a measure of censure from the Uruguayan Opposition, from Pedro Bordaberry and others, who were critical of Vázquez for having chosen to be in Cuba during a commemoration – which Vázquez himself initiated – for the victims of the 1973–1985 dictatorship; Bordaberry's father, Juan María Bordaberry, established the dictatorship with a 1973 decree dissolving Congress.[5]

In 2007 the loading of Iranian arms onto a Uruguayan Navy vessel visiting Venezuela, in contravention of a UN-sponsored arms embargo, provoked international comment. Internal controversy regarding this event was centred on protests to Vázquez's Government from the Uruguayan opposition National Party.[6]

In February 2010 the Vázquez Government was cooperating with an investigation to explain how two Northrop F-5E jet engines valued at many millions of US dollars had surfaced in Uruguay.[7]

In June 2009 President Vázquez, who had been courting diplomatically the Bolivian President Evo Morales, announced his support for the delisting of coca leaves from the category of a 'dangerous drug'.[8]

President Vázquez began his tenure with a 77%[citation needed] approval rating; but according to an Equipos/MORI opinion poll his approval had fallen to 44% by April 2007, a level below the electoral support he received in the 2004 elections.[9] His approval later recovered, however, reaching 80% by his last term in office.[10]

While his decision not to sign the failed Free Trade Area of the Americas treaty in 2006 alienated conservative voters, other moves by his administration concerning economic policy have met with resistance from trade unions and the left. Furthermore, many believe[who?] that Vázquez's opposition to legalising abortion and threats to veto any pro-choice legislation passed by the government – a position that stands in contrast with the opinions of the majority of his governing coalition – have made a modest dent in his public support. (Against this it may also be noted that one of the constituent parties of the ruling Frente Amplio coalition – the cohesion of which Vázquez is pledged to maintain – is the Christian Democratic Party of Uruguay, which opposes the measure.) In October 2006, President Vázquez was still personally more popular than his government with a 62% approval rating. However, a considerable drop in the government's popularity was registered by an Equipos/MORI poll in late April 2007, showing that 44% of Uruguayans approved of his administration.[9] A new poll by Factum showed a 57% approval by June 2008, however, indicating a significant recovery from a year earlier.[11]

In January 2008, two members of the ruling coalition, former Senator José Korzeniak and Foreign Secretary Reinaldo Gargano, made proposals to reform the Constitution of Uruguay, focusing on the possibility of allowing Vázquez to run again in 2010. For most of Uruguay's history, the president has been barred from immediate reelection. The central tenet of the re-election clause was based on Vázquez' continuing popularity, as well as the desire to prevent a divisive succession battle within the Frente Amplio. However, both the opposition parties, as well as some members of the Frente Amplio, opposed allowing the president to immediately succeed himself. Vázquez himself ruled out a 2010 campaign in a public address given in June 2007.[citation needed]

A perceived strength of Vázquez is his ability to hold together in the Frente Amplio ruling coalition figures of greatly differing outlook. After the Mujica-Astori couple were elected in November 2009 as President and Vice President respectively, Vázquez was offered to resume the presidency of the Frente Amplio but he declined. Vázquez went on to be the Frente Amplio candidate for Presidency in 2014.

On 4 December 2008, Vázquez resigned his leadership posts at the Socialist Party due to controversy over his opposition to abortion rights.

Renominated by the Broad Front for the Presidency with running mate Raúl Fernando Sendic on 1 June,[13] he came up just a few thousand votes short of winning the presidency outright in 26 October election. He was returned to office in 30 November runoff, defeating right-wing candidate Luis Alberto Lacalle Pou of the National Party by 53% to 41% in the second round.[14]

On August 20, 2019, he announced through a brief nation-wide broadcast that he will be undergoing treatment for possible pulmonary cancer.[16][17][18]

Vázquez was awarded the World Health Organization Director General's Award in 2006 in recognition of his leadership on tobacco control in Uruguay, which has implemented some of the most stringent tobacco control measures in the world.[21]

As of 20 August 2019, President Vázquez revealed that he suffered from a lung nodule with malignant appearance.[22] Nevertheless he announced his intention of finishing his presidential term on 1 March 2020 as planned.[23] At mid-November, it was confirmed by authorities of the Public Health Minister (MSP), that his lung cancer was cured.[24]

In January 2020, Mr. Vázquez reached the age of 80 while finishing his term of office, due to expire on March 1, 2020. This age was last reached by a sitting President of Uruguay by Alberto Demicheli in 1976. (Mr. Demicheli served in office as an appointee of the 1973-1985 civilian-military dictatorship; Mr. Vázquez was elected to office.)