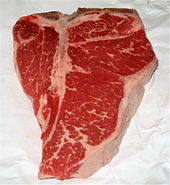 The T-bone and porterhouse are steaks of beef cut from the short loin (called the sirloin in Commonwealth countries and Ireland). Both steaks include a "T"-shaped lumbar vertebra with sections of abdominal internal oblique muscle on each side. Porterhouse steaks are cut from the rear end of the short loin and thus include more tenderloin steak, along with (on the other side of the bone) a large strip steak. T-bone steaks are cut closer to the front, and contain a smaller section of tenderloin. The smaller portion of a T-bone, when sold alone, is known as a filet mignon (called fillet steak in Commonwealth countries and Ireland), especially if cut from the small forward end of the tenderloin.

There is little agreement among experts on how large the tenderloin must be to differentiate a T-bone steak from porterhouse. The United States Department of Agriculture's Institutional Meat Purchase Specifications state that the tenderloin of a porterhouse must be at least 1.25 inches (32 mm) wide at its widest, while that of a T-bone must be at least 0.5 inches (13 mm) wide. However, steaks with a large tenderloin are often called a "T-bone" in restaurants and steakhouses despite technically being porterhouse.[1]

Owing to their large size and the fact that they contain meat from two of the most prized cuts of beef (the short loin and the tenderloin), T-bone steaks are generally considered one of the highest quality steaks, and prices at steakhouses are accordingly high. Porterhouse steaks are even more highly valued owing to their larger tenderloin.

In the United States, the T-bone has the meat-cutting classification IMPS 1174; the porterhouse is IMPS 1173.

In British usage, followed in the Commonwealth countries, "porterhouse" often means a British sirloin steak (i.e. US strip steak) on the bone, i.e. without the tenderloin on the other side of T-bone.[2] However, nowadays some British on-line butchers also offer American style porterhouse steaks.[3]

In New Zealand and Australia, a Porterhouse is sirloin steak (strip steak in USA) off the bone.

The origin of the term "porterhouse" is contentious, with several cities and establishments claiming to have coined it. The Oxford English Dictionary traces the etymology from proprietor Martin Morrison serving large T-bones in his Pearl Street (Manhattan) "Porter House" around 1814, while noting the lack of contemporary evidence to support the tale.[4] This origin story gained traction in the late 19th century. Some sources contend a Cambridge, Massachusetts hotel and restaurant proprietor named Zachariah B. Porter lent his name to the cut of beef. In that era (late 18th to early 20th century), Porter Square was flanked by cattle yards that used the Porter rail head to transport their beef throughout the US. Still others claim the steak takes its name from various other 19th Century U.S. hotels or restaurants called Porter House, such as the Porter House Hotel in Flowery Branch, Georgia.[5]

Anatomy of the T-bone 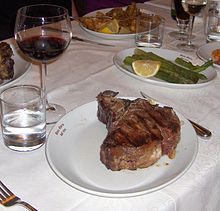 T-bone and porterhouse steaks are suited to fast, dry heat cooking methods, such as grilling or broiling. Since they contain a small amount of collagen relative to other cuts, longer cooking times are not necessary to tenderize the meat. There is some contention as to whether the bone conducts heat within the meat so that it cooks more evenly and prevents meat drying out and shrinking during cooking,[6][7] or the meat near the bone will cook more slowly than the rest of the steak[8], and the tenderloin will tend to reach the desired temperature before the strip.[9][10]

Bistecca alla fiorentina, or 'beefsteak Florentine style', consists of a T-bone traditionally sourced from either the Chianina or Maremmana breeds of cattle. A favorite of Tuscan cuisine, the steak is grilled over a wood or charcoal fire, seasoned with salt, sometimes with black pepper, and olive oil, applied immediately after the meat is retired from the heat. Thickly cut and very large, "Bistecca" are often shared between two or more persons, and traditionally served very rare, sometimes garnished with lemon wedges, if not accompanied by red wine, and accompanied by Tuscan beans as a side dish.[11]

The same cut of meat, but from a calf, is used for Cotoletta alla milanese, which consists of 1.5 cm-thick cuts which are battered in breadcrumbs and fried in clarified butter with salt.