Tête-à-la-Baleine is an unconstituted locality (as defined by Statistics Canada in the 2011 Canadian Census) within the municipality of Côte-Nord-du-Golfe-du-Saint-Laurent in the Côte-Nord region of Quebec, Canada. Its population in the 2011 census was 129.

Tête-à-la-Baleine, occasionally known as Whale Head in English, was settled in the 19th century after Michael Kenty bought the local trading post from the Labrador Company. Initial settlement mostly took place on the nearby islands in the Gulf of Saint Lawrence, although eventually most residents moved to the community's current site on the mainland in order to be closer to sources of wood and food in the winter. However, some residents still move back and forth, residing on the islands in summer and in the mainland community in winter.[3]

The community is named after a nearby island in the Gros Mécatina Archipelago that resembles a whale head.[1]

There is a17 km (11 mi) section of Quebec Highway 138 connecting through the community between the Tête-à-la-Baleine Airport and ferry terminal. 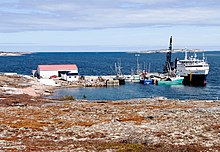