Syrians (Arabic: سوريون‎), also known as the Syrian people (Arabic: الشعب السوري‎, ALA-LC: al-sha‘ab al-Sūrī; Syriac: ܣܘܪܝܝܢ‎), are the majority inhabitants of Syria, who share common Levantine Semitic roots. The cultural and linguistic heritage of the Syrian people is a blend of both indigenous elements and the foreign cultures that have come to rule the land and its people over the course of thousands of years. The mother tongue of most Syrians is Levantine Arabic, which came to replace the former mother tongue, Aramaic, in the aftermath of the Muslim conquest of the Levant in the 7th century. The conquest led to the establishment of the Caliphate under successive Arab dynasties, who, during the period of the Abbasid Caliphate, promoted the use of the Arabic language. A minority of Syrians retained Aramaic which is still spoken in its Eastern and Western dialects. In 2018, the Syrian Arab Republic had an estimated population of 19.5 million, which includes, aside from the aforementioned majority, ethnic minorities such as Kurds, Armenians, and others.

The name "Syrians" was employed by the Greeks and Romans to denote the inhabitants of Syria; however, they called themselves Arameans and Assyrians. The ethnic designation "Syrian" is derived from the word "Assyrian" and appeared in the Hellenistic and Roman periods. Some argue that the Çineköy inscription supports this theory.

Appellation of the name

The Greeks used the terms "Syrian" and "Assyrian" interchangeably to indicate the indigenous Arameans, Assyrians and other inhabitants of the Near East, Herodotus considered "Syria" west of the Euphrates. Starting from the 2nd century BC onwards, ancient writers referred to the Seleucid ruler as the King of Syria or King of the Syrians.[24] The Seleucids designated the districts of Seleucis and Coele-Syria explicitly as Syria and ruled the Syrians as indigenous populations residing west of the Euphrates (Aramea) in contrast to Assyrians who had their native homeland in Mesopotamia east of the Euphrates.[25] However, the interchangeability between Assyrians and Syrians persisted during the Hellenistic period.[25]

The term Syrian was imposed upon Arameans of modern Levant by the Romans. Pompey created the province of Syria, which included modern-day Lebanon and Syria west of the Euphrates, framing the province as a regional social category with civic implications.[27] Plutarch described the indigenous people of this newly created Roman province as "Syrians",[28] so did Strabo, who observed that Syrians resided west of the Euphrates in Roman Syria,[27] and he explicitly mentions that those Syrians are the Arameans, whom he calls Aramaei, indicating an extant ethnicity.[29] Posidonius noted that the people called Syrians by the Greeks refer to themselves as Arameans.[30]

In his book The Great Roman-Jewish War, Josephus, a Hebrew native to the Levant, mentioned the Syrians as the non-Hebrew, non-Greek indigenous inhabitants of Syria.[31]

The Arabs called Syria and the Levant Al-Sham. The national and ethnic designation "Syrian" is one that has been reused, accepted and espoused by the Syrian people since the advent of modern nationalism, which emanated from Europe and began with the culmination of the Napoleonic Wars of the early 1800s.

Syrians emerged from various origins; the main influence came from ancient Semitic peoples, populations from Arabia and Mesopotamia, while Greco-Roman influence is marginal.[32] Ancient Syria of the first millennium BC was dominated by the Aramaeans;[33] they originated in the Northern Levant as a continuum of the Bronze Age populations of Syria.[34] The Seleucids ruled the Syrians as a conquered nation; Syrians were not assimilated into Greek communities, and many local peasants were exploited financially as they had to pay rent for Greek landlords. Outside Greek colonies, the Syrians lived in districts governed by local temples that did not use the Greek civic system of poleis and colonies.[35] The situation changed after the Roman conquest in 64 BC; Syrians obtained the citizenship of Greek poleis, and the line separating between the colonists and the colonized blurred. The idioms Syrian and Greek were used by Rome to denote civic societies instead of separate ethnic groups.[36]

The Aramaeans assimilated the earlier populations through their language; combined with the common religion, Christianity, most of the inhabitants turned into Syrians (Aramaeans). Islam and the Arabic language had a similar effect where the Aramaeans themselves became Arabs regardless of their ethnic origin following the Muslim conquest of the Levant.[33] The presence of Arabs in Syria is recorded since the 9th century BC,[37] and Roman period historians, such as Strabo, Pliny the Elder, and Ptolemy, reported that Arabs inhabited many parts of Syria.[38] What antiquity writers meant by the designation "Arab" is debated; the historian Michael Macdonald suggested that the term is an ethnic designation based on an "ill-defined complex of linguistic and cultural characteristics",[39] while according to academic consensus, "Arab", in addition to it being an ethnic name, had a social meaning describing a nomadic way of life.[40] The urheimat of the Arab ethnos is unclear; the traditional 19th century theory locates this in the Arabian Peninsula,[41] while some modern scholars, such as David Frank Graf, note that the epigraphic and archaeological evidence render the traditional theory inadequate to explain the Arabs' appearance in Syria.[note 1][43] The Arabs mentioned in Syria by Greco-Roman writers were assimilated into the "Greco–Aramaean culture" that dominated the region, and the texts they produced were written in Greek or Aramaic;[46] Old Arabic, the precursor of Classical Arabic, was not a written language, and its speakers used Aramaic for writing purposes.[47]

On the eve of the Rashidun Caliphate conquest of the Levant, 634 AD, Syria's population mainly spoke Aramaic; Greek was the official language of administration. Arabization and Islamization of Syria began in the 7th century, and it took several centuries for Islam, the Arab identity, and language to spread;[48] the Arabs of the Caliphate did not attempt to spread their language or religion in the early periods of the conquest, and formed an isolated aristocracy.[49] The Arabs of the Claiphate accommodated many new tribes in isolated areas to avoid conflict with the locals; caliph Uthman ordered his governor, Muawiyah I, to settle the new tribes away from the original population.[50] Syrians who belonged to Monophysitic denominations welcomed the peninsular Arabs as liberators.[51]

The Abbasids in the eighth and ninth century sought to integrate the peoples under their authority, and the arabization of the administration was one of the tools.[52] Arabization gained momentum with the increasing numbers of Muslim converts;[48] the ascendancy of Arabic as the formal language of the state prompted the cultural and linguistic assimilation of Syrian converts.[53] Those who remained Christian also became arabized;[52] it was probably during the Abbasid period in the ninth century that Christians adopted Arabic as their first language; the first translation of the gospels into Arabic took place in this century.[54] Many historians, such as Claude Cahen and Bernard Hamilton, proposed that the arabization of Christians was completed before the First Crusade.[55] By the thirteenth century, Arabic language achieved dominance in the region and its speakers became Arabs.[48]

Those who were able to avoid losing the Aramaic language are divided between two groups: 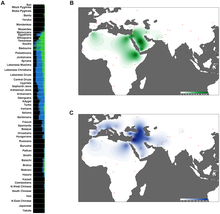 The paternal Y-DNA haplogroup J1, which reaches its highest frequencies in Yemen 72.6% and Qatar 58.3%, accounted for 33.6% of Syrians.[72] The J2 group accounted for 20.8% of Syrians; other Y-DNA haplogroups include the E1B1B 12.0%, I 5.0%, R1a 10.0% and R1b 15.0%.[65][73] The Syrians are closest to other Levantine populations: the Palestinians, Lebanese and Jordanians;[74] this closeness can be explained with the common Canaanite ancestry and geographical unity which was broken only in the twentieth century with the advent of British and French mandates.[75] Regarding the genetic relation between the Syrians and the Lebanese based on Y-DNA, Muslims from Lebanon show closer relation to Syrians than their Christian compatriots.[76] The people of Western Syria show close relation with the people of Northern Lebanon.[77]

Mitochondrial DNA shows the Syrians to have affinity with Europe; main haplogroups are H and R.[78] Based on Mitochondrial DNA, the Syrians, Palestinian, Lebanese and Jordanians form a close cluster.[79] Compared to the Lebanese, Bedouins and Palestinians, the Syrians have noticeably more Northern European component, estimated at 7%.[80] Regarding the HLA alleles, Syrians, and other Levantine populations, exhibit "key differences" from other Arab populations;[81] based on HLA-DRB1 alleles, Syrians were close to eastern Mediterranean populations, such as the Cretans and Lebanese Armenians.[82] Studying the genetic relation between Jews and Syrians showed that the two populations share close affinity.[83] Apparently, the cultural influence of Arab expansion in the Eastern Mediterranean in the seventh century was more prominent than the genetic influx.[84] However, the expansion of Islam did leave an impact on Levantine genes; religion drove Levantine Muslims to mix with other Muslim populations, who were close culturally despite the geographic distance, and this produced genetic similarities between Levantine Muslims and Moroccan and Yemeni populations. Christians and Druze became a genetic isolate in the predominantly Islamic world.[85]

Arabic is the mother tongue of the majority[86] of Syrians as well as the official state language. The Syrian variety of Levantine Arabic differs from Modern Standard Arabic. Western Neo-Aramaic, the only surviving Western Aramaic language, is still spoken in three villages (Ma'loula, Al-Sarkha (Bakhah) and Jubb'adin) in the Anti-Lebanon Mountains by both Muslim and Christian residents. Syriac-Assyrians in the northeast of the country are mainly Surayt/Turoyo speakers but there are also some speakers of Assyrian Neo-Aramaic, especially in the Khabour Valley. Classical Syriac is also used as a liturgical language by Syriac Christians. English, and to a lesser extent French, is widely understood and used in interactions with tourists and other foreigners.

Play media
Clip - Interview with Paolo Dall'Oglio, The Syrian tradition of coexistence and the present scenario of confrontation

Religious differences in Syria have historically been tolerated,[87][88] and religious minorities tend to retain distinct cultural, and religious identities. Sunni Islam is the religion of 74% of Syrians. The Alawites, a variety of Shia Islam, make up 12% of the population and mostly live in and around Tartus and Latakia. Christians make up 10% of the country. Most Syrian Christians adhere to the Byzantine Rite; the two largest are the Antiochian Orthodox Church and the Melkite Greek Catholic Church.[89][90] The Druze are a mountainous people who reside in Jabal al-Druze who helped spark the Great Syrian Revolt. The Ismailis are an even smaller sect that originated in Asia. Many Armenian and Assyrian Christians fled Turkey during the Armenian Genocide and the Assyrian genocide and settled in Syria. There are also roughly 500,000 Palestinians, who are mostly descendants of refugees from the 1948 Israeli-Arab War. The community of Syrian Jews inside Syria once numbered 30,000 in 1947, but has only 200 today.[91]

The Syrian people's beliefs and outlooks, similar to those of most Arabs and people of the wider Middle-East, are a mosaic of West and East. Conservative and liberally minded people will live right next to each other. Like the other countries in the region, religion permeates life; the government registers every Syrian's religious affiliation. However, the number of non-believers in Syria is increasing but there is no credible source or statistics to support this information.

Syrian cuisine is dominated by ingredients native to the region. Olive oil, garlic, olives, spearmint, and sesame oil are some of the ingredients that are used in many traditional meals. Traditional Syrian dishes enjoyed by Syrians include, tabbouleh, labaneh, shanklish, wara' 'enab, makdous, kebab, Kibbeh, sfiha, moutabal, hummus, mana'eesh, bameh, and fattoush.

A typical Syrian breakfast is a meze. It is an assortment platter of foods with cheeses, pickles, olives, and spreads. Meze is usually served with Arab-style tea - highly concentrated black tea, which is highly sweetened and served in small glass cups. Another popular drink, especially with Christians and non-practicing Muslims, is the arak, a liquor produced from grapes or dates and flavored with anise that can have an alcohol content of over 90% ABV (however, most commercial Syrian arak brands are about 40-60% ABV). 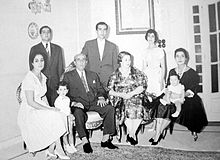