The Sword of Goujian was found in 1965 in Hubei, China. Cast in tin bronze, it is renowned for its unusual sharpness and resistance to tarnish rarely seen in artifacts so old. This historical artifact of ancient China is currently in the possession of the Hubei Provincial Museum.

In 1965, while an archaeological survey was being performed along the second main aqueduct of the Zhang River Reservoir in Jingzhou, Hubei, a series of ancient tombs were discovered in Jiangling County. A dig started in the middle of October 1965, ending in January 1966, eventually revealing more than fifty ancient tombs of the Chu State.

More than 2,000 artifacts were recovered from the sites, including an ornate bronze sword, found inside a casket together with a human skeleton. The casket was discovered in December 1965, at Wangshan site #1, 7 kilometres (4.3 mi) from the ruins of Ying, currently called Jinancheng 纪南), an ancient capital of Chu.

The sword was found sheathed in a wooden scabbard finished in black lacquer. The scabbard had an almost air-tight fit with the sword body. Unsheathing the sword revealed an untarnished blade, despite the tomb being soaked in underground water for over 2,000 years. [1]

Part of the ancient text, lit. 'The King of Yue personally made' (越王自作) 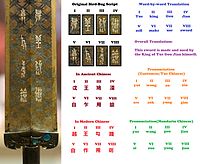 Deciphering the scripts on the Sword of Goujian

On one side of the blade, two columns of text are visible. Eight characters are written in an ancient script, now known as Bird-worm seal script (literally "birds and worms characters", owing to the intricate decorations of the defining strokes), a variant of seal script. Initial analysis of the text deciphered six of the characters, "King of Yue" (越王) and "made this sword for [his] personal use" (自作用劍). The remaining two characters were assumed to be the name of the particular King of Yue.

From the sword's origin in 510 BC to its demise at the hands of the Chu in 334 BC, nine kings ruled Yue, including Goujian, Lu Cheng, Bu Shou, and Zhu Gou. The identity of the king in the sword inscription sparked debate among archeologists and Chinese language scholars. The discussion was carried out mostly via letter, and involved famous scholars such as Guo Moruo. After more than two months, the experts[who?] started to form a consensus that the original owner of the sword was Goujian (勾踐), the King of Yue made famous by his perseverance in time of hardship.

The sword of Goujian is 55.6 centimetres (21.9 in) in length, including an 8.4 centimetres (3.3 in) hilt; the blade is 4.6 centimetres (1.8 in) wide at its base. The sword weighs 875 grams (30.9 oz). In addition to the repeating dark rhombi pattern on both sides of the blade, there are decorations of blue crystals and turquoise. The grip of the sword is bound by silk, while the pommel is composed of eleven concentric circles.

The Sword of Goujian still has a sharp blade and shows no signs of tarnish. To understand why, scientists at Fudan University and CAS used modern equipment to determine the chemical composition of the sword, as shown in the table below.

Amount of elements by percentage

The body of the blade is mainly made of copper, making it more pliant and less likely to shatter; the edges have more tin content, making them harder and capable of retaining a sharper edge; the sulfur decreases the chance of tarnish in the patterns.

It is likely that the chemical composition, along with the almost air-tight scabbard, led to the exceptional state of preservation.

While on loan to Singapore for display as part of a cultural exchange exhibition in 1994, a worker accidentally bumped the sword against the case, resulting in a 7-millimetre (0.28 in) crack on the sword. Since then, China does not allow the sword to be taken out of the country, and in 2013 officially placed the sword onto the list of Chinese cultural relics forbidden to be exhibited abroad.[2]