The number of Swiss nationals has grown from 1.7 million in 1815 to 7 million in 2016. More than 1.5 million Swiss citizens hold multiple citizenship.[5] About 11% of citizens live abroad (0.8 million, of whom 0.6 million hold multiple citizenship). About 60% of those living abroad reside in the European Union (0.46 million). The largest groups of Swiss descendants and nationals outside Europe are found in the United States and Canada.

Although the modern state of Switzerland originated in 1848, the period of romantic nationalism, it is not a nation-state, and the Swiss are not usually considered to form a single ethnic group, but a confederacy (Eidgenossenschaft) or Willensnation ("nation of will", "nation by choice", that is, a consociational state), a term coined in conscious contrast to "nation" in the conventionally linguistic or ethnic sense of the term.

The demonym Swiss (formerly in English also Switzer) and the name of Switzerland, ultimately derive from the toponym Schwyz, have been in widespread use to refer to the Old Swiss Confederacy since the 16th century.[6] 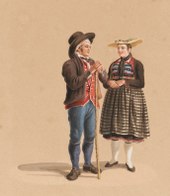 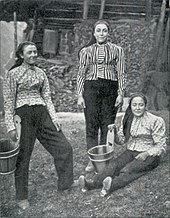 The ethno-linguistic composition of the territories of modern Switzerland includes the following components:

The core Eight Cantons of the Swiss Confederacy were entirely Alemannic-speaking, and German speakers remain the majority. However, from as early as the 15th century, parts of French-speaking Vaud and Italian-speaking Ticino were acquired as subject territories by Berne and Uri, respectively. The Swiss Romandie was formed by the accession of French-speaking Geneva and Neuchâtel and the partly francophone Valais and Bernese Jura (formerly part of the Prince-Bishopric of Basel) to the Restored Swiss Confederacy in 1815. Romansh was formerly considered a group of Italian dialects, but Switzerland declared Romansh a national language in 1938 in reaction to the fascist Italian irredentism at the time.

As elsewhere in Western Europe, immigration to Switzerland has increased dramatically since the 1960s, so that a large proportion of the resident population of Switzerland are now not descended or only partially descended from the core ethno-linguistic groups listed above. As of 2011, 37% of total resident population of Switzerland had immigrant background.[8] As of 2016, the most widely used foreign languages were English, Portuguese, Albanian, Serbo-Croat and Spanish, all named as a "main language" by more than 2% of total population (respondents could name more than one "main language").[9] 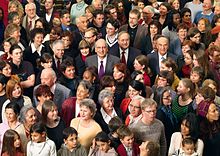 The Swiss populace historically derives from an amalgamation of Gallic or Gallo-Roman, Alamannic and Rhaetic stock. Their cultural history is dominated by the Alps, and the alpine environment is often cited as an important factor in the formation of the Swiss national character.[11] For example, the "Swiss illness", the condition of Swiss mercenaries pining for their mountainous native home, became prototypical of the medical condition of nostalgia ("homesickness") described in the 17th century.

In early modern Switzerland, the Swiss Confederacy was a pact between independent states within the Holy Roman Empire. The populations of the states of Central Switzerland considered themselves ethnically or even racially separate: Martin Zeiller in Topographia Germaniae (1642) reports a racial division even within the canton of Unterwalden, the population of Obwalden being identified as "Romans", and that of Nidwalden as "Cimbri" (viz. Germanic), while the people of Schwyz were identified as of Swedish ancestry, and the people of Uri were identified as "Huns or Goths".[12]

Modern Switzerland is atypical in its successful political integration of a multiethnic and multilingual populace, and is often cited as a model for new efforts at creating unification, as in the European Union's frequent invocation of the Swiss Confederate model.[13] Because the various populations of Switzerland share language, ethnicity, and religion not with each other but with the major European powers between whom Switzerland during the modern history of Europe found itself positioned, a policy of domestic plurality in conjunction with international neutrality became a matter of self-preservation.[14] Consequently, the Swiss elites during the period of the formation of nation states throughout Europe did not attempt to impose a national language or a nationalism based on ethnicity, instead pushing for the creation of a civic nation grounded in democratic ideology, common political institutions, and shared political ritual. Political allegiance and patriotism was directed towards the cantons, not the federal level, where a spirit of rivalry and competition rather than unity prevailed. C. G. Jung advanced the view that this system of social order was one of a "chronic state of mitigated civil war" which put Switzerland ahead of the world in a civilizatory process of "introverting" warlike aggression.[15] A similar view is attributed to Gottfried Keller, who is cited to the effect that the Swiss Confederacy could not exist without the endemic rivalry between cantons.[16]

From the 19th century there were conscious attempts to foster a federal "Pan-Swiss" national identity that would replace or alleviate the cantonal patriotisms. Among the traditions enlisted to this end were federal sharpshooting competitions or tirs, because they were one of the few recognized symbols of pan-Swiss identity prior to the creation of the 1815 Confederation and because they traditionally involved men from all levels of society, including the peasants, who in Romantic nationalism had become ideologically synonymous with liberty and nationhood.[17] An additional symbol of federal national identity at the federal level was introduced with the Swiss national holiday in 1889. The bonfires associated with the national holiday have become so customary since then that they have displaced the Funken traditions of greater antiquity.

Identification with the national symbolism relating to the Old Swiss Confederacy was especially difficult for the cantons which had been joined to the Helvetic Republic in 1798 without any prior membership in the Swiss Confederacy, and which were given the status of Swiss cantons only after the end of the Napoleonic era. These specifically include Grisons, Valais, Ticino, Vaud and Geneva. St. Gallen is a special case in a different sense, being a conglomerate of various historical regions created in 1803; in this case, patriotism may attach itself even to sub-cantonal entities, such as the Toggenburg. Similarly, due to the historical imperialism of the canton of Berne, there is considerable irredentism within the Bernese lands, most visibly in the Bernese Jura but to a lesser extent also in parts of the Bernese Oberland such as Hasli.

Swiss citizenship is still primarily citizenship in one of the Swiss cantons, and the naturalization of foreign citizens is the privilege of the cantons. No Swiss passports were issued prior to 1915, more than 60 years after the establishment of the modern Swiss Confederation. Prior to 1915, citizens held passports issued by their cantons, the Confederation being considered as a federation of the cantons, not a state composed of natural persons as its citizens.

The Swiss Constitution of 1848 regulated certain rights that the cantons were required to grant to citizens of other cantons, such as the right of residence (in the case of naturalized citizens after a period of five years).[18] The Swiss Constitution of 1874, which remained in force (with revisions) until 1999, defined Swiss citizenship as inherited from cantonal citizenship: Jeder Kantonsbürger ist Schweizer Bürger ("every citizen of a canton is a Swiss citizen").[19] In the preamble to the current Swiss Constitution of 1999, a "Swiss People" (Schweizervolk) is invoked alongsides "the Cantons" as sovereign entity, and article 1 reads "The People and the Cantons [...] form the Swiss Confederation." Article 37 still defines Swiss citizenship as inherited from communal and cantonal citizenship: "Any person who is a citizen of a commune and of the Canton to which that commune belongs is a Swiss citizen."[20]

Further information: Genetic history of Europe and Y-DNA haplogroups in populations of Europe

The genetic composition of the Swiss population is similar to that of Central Europe in general. Switzerland is on one hand at the crossroads of several prehistoric migrations, while on the other hand the Alps acted as a refuge in some cases. Genetic studies found the following haplogroups to be prevalent: