Swiss Inventory of Cultural Property of National and Regional Significance 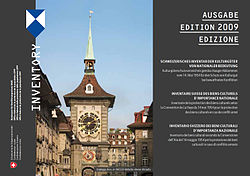 The cover of the 2009 edition of the Inventory, showing the Zytglogge in Bern and the blue shield of the Hague Convention.

The Swiss Inventory of Cultural Property of National and Regional Significance (German: Schweizerisches Inventar der Kulturgüter von nationaler und regionaler Bedeutung; French: Inventaire suisse des biens culturels d'importance nationale et régionale; Italian: Inventario dei beni culturali svizzeri d'importanza nazionale e regionale) is a register of some 8,300 items of cultural property in Switzerland. It was established according to article 5 of the second protocol to the Hague Convention for the Protection of Cultural Property in the Event of Armed Conflict, which provides for the establishment of national registers of cultural property.

The register contains both mobile and immobile items of cultural property including old towns, quarters, squares, villages, sacral buildings, houses, castles, bridges, monuments, archaeological sites and collections. Its entries are classified in two groups: those of national significance (class A – 3202 objects with 3324 entries, including sites shared between two municipalities) and those of regional significance (class B). The selection is based on the significance of the items in the domains of history, aesthetics, art, typology, ethnography, social studies and in other scientific disciplines, as well as on their rarity value. Items of purely local significance are not included; these may be registered separately by the cantonal authorities. 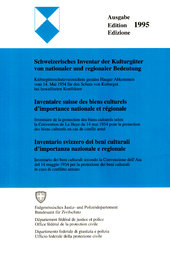 The Federal Office of Civil Protection has made the 2009 register of A-class objects (current as of 1 April 2010) available on the Internet as a geographic information system and as a set of PDF documents. A printed catalogue (publication no. 408.980) was published in 2010.