The party was founded in 1944 by the illegal Communist Party of Switzerland. On May 21 the constituent conference of the Basel Federation of the party was held. On October 14–15 the same year the first Party Congress of the party was held in Zürich. Léon Nicole was elected President and Karl Hofmaier General Secretary. On October 6–7, 1945 the Second Congress was held in Geneva. By this time the party has 20 000 members. On November 30-December 1 the 3rd Congress in Zürich. On July 27 a Swiss Party Conference was held in Bern. Karl Hofmaier was removed from his position due to a financial scandal. In the national elections of 1947 the party received 5.1% of the vote. 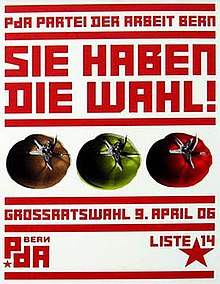 Poster for the 2006 elections to the Grand Council of Bern.

On July 4–6, 1949, the 4th Congress was held. Steps to strengthen the organization as a Cadre Party are taken. Edgar Woog elected General Secretary. In 1950, the party works intensively for the Stockholm Appeal. 260 000 signatures are collected in Switzerland. On May 31-June 2, 1952, the 5th Congress is held in Geneva. On December 7 the Central Committee expels Léon Nicole from the party. On May 28–30, 6th Congress in Geneva.

On May 16–18, 1959, 7th Congress in Geneva. A new party programme approved with the concept of antimonopolistic unity, "Swiss Road to Socialism" (inspired by the similar programme of the Communist Party of Great Britain). On May 16–18, 1964, 8th Congress in Geneva. In 2015, the party has no seats in the Swiss cantonal councils, and was not represented in any of the 26 cantonal governments.[8] The Ticino section of the party, during an extraordinary congress held on 16 September 2007, by an overwhelming majority, decided to change its name to "Communist Party",[citation needed] thus resuming the original name and redirecting the policy of practice to one that was critical of the Party of European Left.[citation needed] This resulted in conflict with the national party headed by Norberto Crivelli, Socialist leader passed to the communists in the 80s.[citation needed]

Logo of the party in Italian version.

The XXII Congress of the section of the Ticino, held on 10 November 2013, marked the unification of the organs partisan Ticino with those of the Italian Grisons, creating the Communist Party of Southern Switzerland, which after 2014 has stopped the collaboration with the Swiss Party of Labour, becoming the Communist Party (Switzerland) which is active on a national level.

Holding two seats in the Swiss National Council (the lower or first chamber of the Swiss parliament) going into the 2007 elections, the party stood candidates in the cantons of Zürich, Vaud, Geneva and the Ticino on their own; in Neuchâtel the candidate appeared on a joint list with Solidarity. While the share of the vote in 2007 was similar to the party's 2003 results (0.7%), the party lost the seat held by Josef Zisyadis, while retaining the seat held by Marianne Huguenin.[9] However, on 1 November 2007 Huguenin announced her resignation from the National Council to focus on her position as mayor of Renens, Vaud, leaving Zisyadis to take the Party's seat in the National Council representing Vaud.[10]

1.^a * indicates that the party was not on the ballot in this canton.
2.^b Combined result for PdA and Solidarity.
3.^c Part of the Canton of Bern until 1979.