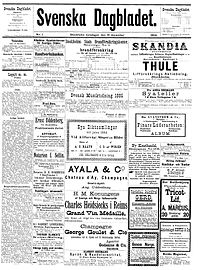 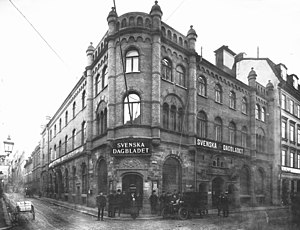 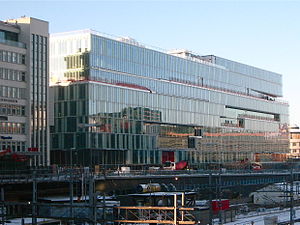 Kungsbrohuset: Buildings in the Norrmalm district

The first issue of Svenska Dagbladet appeared on 18 December 1884. Ivar Anderson is among its former editors-in-chief who assumed the post in 1940.[2]

The paper is published in Stockholm and provides coverage of national and international news as well as local coverage of the Greater Stockholm region. Its subscribers are concentrated in the capital, but it is distributed in most of Sweden. During the beginning of the 1900s the paper was one of the right-wing publications in Stockholm.[3]

Svenska Dagbladet is owned by Schibsted[4] which purchased it in the late 1990s.[5] The stated position of the editorial page is "independently moderate" (oberoende moderat), which means it is independent but adheres to the liberal conservatism of the Moderate Party. Despite this position, the paper is also regarded as conservative.[6][7]

In November 2000 Svenska Dagbladet changed its format from broadsheet to tabloid.[8][9] In 2005 the paper started a Web portal for business news as a joint venture with Aftonbladet.[10]

As the only other Swedish morning newspaper to aspire to full national and international coverage, Svenska Dagbladet is the chief rival of Dagens Nyheter.

Anna Careborg was appointed acting CEO and Editor-in-chief in January 2019, taking over from Fredric Karén, who is now working with Torstar Group, owners of the Toronto Star, in Canada.

Careborg took over fully as new CEO and Editor-in-chief of Svenska Dagbladet in October 2019.