Escutcheon (heraldry) Achievement (heraldry) Coat of arms
Figures usually placed on either side of an heraldic shield and depicted holding it up
This article is about the heraldic element. For sport team proponents, see Fan (person). For other uses in sports, see Athletic supporter (disambiguation). 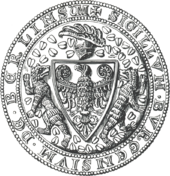 Seal of the city of Berlin (1280), showing the Brandenburg coat of arms flanked by two bears 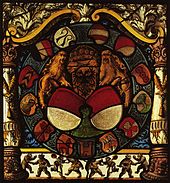 Standesscheibe of Solothurn, c. 1520, with two lions as supporters 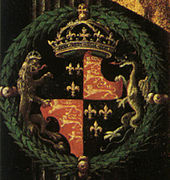 Early example of the Royal Arms of England with lion and dragon as supporters, from a painting of Edward VI dated c. 1547

In heraldry, supporters, sometimes referred to as attendants, are figures or objects usually placed on either side of the shield and depicted holding it up.

Early forms of supporters are found in medieval seals. However, unlike the coronet or helmet and crest, supporters were not part of early medieval heraldry. As part of the heraldic achievement, they first become fashionable towards the end of the 15th century, but even in the 17th century were not necessarily part of the full heraldic achievement (being absent, for example, in Siebmachers Wappenbuch of 1605).

The figures used as supporters may be based on real or imaginary animals, human figures, and in rare cases plants or other inanimate objects, such as the pillars of Hercules of the coat of arms of Spain. Often, as in other elements of heraldry, these can have local significance, such as the fisherman and the tin miner granted to Cornwall County Council, or a historical link; such as the lion of England and unicorn of Scotland in the two variations of the Coat of Arms of the United Kingdom. The arms of nutritionist John Boyd-Orr use two 'garbs' (wheat sheaves) as supporters; the arms of USS Donald Cook, missiles; the arms of the state of Rio Grande do Norte in Brazil, trees.[1] Letters of the alphabet are used as supporters in the arms of Valencia, Spain. Human supporters can also be allegorical figures, or, more rarely, specifically named individuals.[2]

The context of the application of supporters may vary, although entitlement may be considered conditioned by grant of a type of augmentation of honour by admission in orders of chivalry or by heraldic authorities, such as in the case of traditional British heraldry.

Animal supporters are, by default, as close to rampant as possible, if the nature of the supporter allows it (this does not need to be mentioned in the blazon), though there are some blazoned exceptions. An example of whales 'non-rampant' is the arms of the Dutch municipality of Zaanstad.[7]

Older writers trace origins of supporters to their usages in tournaments, where the shields of the combatants were exposed for inspection, and guarded by their servants or pages disguised in fanciful attire. However, medieval Scottish seals afford numerous examples in which the 13th and 14th century shields were placed between two creatures resembling lizards or dragons. Also, the seal of John, Duke of Normandy, eldest son of the King of France, before 1316 bears his arms as; France ancient, a bordure gules, between two lions rampant away from the shield, and an eagle with expanded wings standing above it.

In Australia, Knights or Dames of the Order of Australia may be granted supporters. It is unclear whether supporters may only be used on arms granted by Garter Principal King of Arms, or whether other heraldic authority suffices.[8] Further, as arms may be legitimately adopted upon an armiger's whim, there may be nothing limiting the adoption of supporters by any person, should they so choose.[9]

In France, writers made a distinctive difference on the subject of supporters, giving the name of Supports to animals, real or imaginary, thus employed; while human figures or angels similarly used are called Tenants (i.e. 'holders'). Trees and other inanimate objects which are sometimes used are called Soutiens.

Knights Grand Companion and Principal Companions of the New Zealand Order of Merit are granted the use of heraldic supporters.[13]

Originally, in England, supporters were regarded as little more than mere decorative and artistic appendages.

Supporters may also be granted to corporations which have a royal charter.[citation needed]