A sunset sunshower in the Mojave desert

A sunshower or sun shower is a meteorological phenomenon in which rain falls while the sun is shining.[1] A sunshower is usually the result of accompanying winds associated with a rain storm sometimes miles away, blowing the airborne raindrops into an area where there are no clouds, therefore causing a sunshower. Sometimes a sunshower is created when a single rain shower cloud passes overhead, and the Sun's angle keeps the sunlight from being obstructed by overhead clouds.

Sunshower conditions often lead to the appearance of a rainbow, if the sun is at a sufficiently low angle.[1] Although used in the United States, Canada, Australia, New Zealand, Ireland and the UK, the term "sunshower" is rarely found in dictionaries.[2] Additionally, the phenomenon has a wide range of sometimes remarkably similar folkloric names in cultures around the world.[3] A common theme is that of clever animals and tricksters getting married or related to the devil, although many variations of this theme are in existence.[2][3] 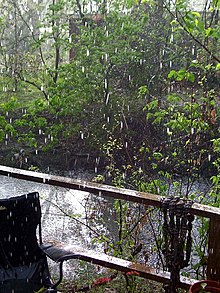 A sunshower over Waller creek in Austin, Texas.