According to one historian,[who?] Swedish industrialism started in Sundsvall when the Tunadal sawmill bought a steam-engine driven saw in 1849. In the early 20th century Sundsvall was an even greater centre of forestry industry in Sweden than it is today. The first large Swedish strike was the "Sundsvall strike" in 1879.[6] The industrial heritage makes social democrat and socialist sympathies more prevalent in the Sundsvall region than in Sweden as a whole.

In 1888 on 25 June, strong wind and dry conditions contributed to two city fires in Sweden on the same day. On this day both Umeå and Sundsvall caught fire.[5] The Sundsvall fire was the largest in Sweden's history. It is presumed that the fire was caused by a spark from a steamship. After the fire, and unlike Umeå, the decision was to rebuild using stone. Sundsvall's centre was later nicknamed Stenstaden (the stone city). One advantage of the new construction was that within three years the town was arguing that it should be allowed reduced insurance as new rules had been brought in that applied to wooden towns. One disadvantage was that after the fire only the better off could afford to live in the centre.[7]

Today Sundsvall is not only dominated by the pulp and paper industry, and the aluminium production but there are also banks, insurance companies, telecommunications administration and a number of large public data-processing centres such as the national social insurance board. The main campus of the newly established Mid Sweden University (Mittuniversitetet) is also located in the city. The university is a collaboration between Östersund, Sundsvall and Härnösand.

Storgatan, the famous main street in Sundsvall in the heart of Stenstaden ("The stone city")

During 1987–2013, there was a summer music festival called Gatufesten. Starting in 2014 there's a new one called Hamnyran. There are two theatres and various musical venues. There is also a small guitar festival and a larger heavy metal festival every autumn called Nordfest.[8] Sundsvall is also home to the unique festival Musikschlaget,[9] which is a song contest for groups around Sweden with disabilities. 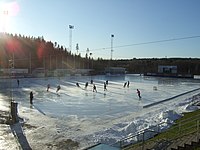 Sundsvall has a climate which is on the border between subarctic and cold continental, leaning towards the latter in recent years. Temperatures are made significantly milder and regulated by the influence from the Gulf Stream. The weather station is located 20 kilometres (12 mi) to the north and somewhat further inland, which renders that Sundsvall's urban centre is likely milder in terms of low temperatures by some degree.

[13] Because of the availability of snow, the Sundsvall Regional Hospital, covering 190 000m2,[14] is cooled down year-round by stored snow, bringing down energy consumption for hospital cooling by 90%.[14][15]