Sundown towns, also known as sunset towns, gray towns, or sundowner towns, are all-white municipalities or neighborhoods in the United States that practice a form of racial segregation by excluding non-whites via some combination of discriminatory local laws, intimidation, and violence. Entire sundown counties[1] and sundown suburbs were also created by the same process. The term came from signs posted that "colored people" had to leave town by sundown.[2] The practice was not restricted to the southern states, as "(a)t least until the early 1960s...northern states could be nearly as inhospitable to black travelers as states like Alabama or Georgia."[3]

Discriminatory policies and actions distinguish sundown towns from towns that have no black residents for demographic reasons. Historically, towns have been confirmed as sundown towns by newspaper articles, county histories, and Works Progress Administration files, corroborated by tax or U.S. Census records showing an absence of black people or sharp drop in the black population between two censuses.[4][1][5]

Following the end of the Reconstruction Era, many thousands of towns and counties across the United States became sundown localities, as part of the imposition of Jim Crow laws and other racist practices. In most cases, the exclusion was official town policy or was promulgated by the community's real estate agents via exclusionary covenants governing who could buy or rent property. In others, the policy was enforced through intimidation. This intimidation could occur in a number of ways, including harassment by law enforcement officers.[6] Though widely believed to be a thing of the past, many hundreds of sunset towns continue to effectively exclude black people and other minorities in the twenty-first century.[7]

In 1844 Oregon banned African Americans from the territory altogether. Those who failed to leave could expect to receive lashings under a law known as the "Peter Burnett Lash Law", named for Provisional Supreme Judge Peter Hardeman Burnett. No persons were ever lashed under the law; it was quickly amended to replace lashing with forced labor, and eventually repealed the following year after a change in the makeup of the legislature.[8][9] However, additional laws aimed at African Americans entering Oregon were ratified in 1849 and 1857, the last of which was not repealed until 1926.[10][11][12] This law in Oregon was the foreshadowing of future laws restricting where minorities could live, not only in Oregon but other jurisdictions.

Outside Oregon, other places looked to laws and legislation to help restrict black people from residing within cities, towns, and states.[13] One example is Louisville, Kentucky, whose mayor proposed a law in 1911 that would restrict black people from owning property in certain parts of the city.[14] This city ordinance reached public attention when it was challenged in the U.S. Supreme Court case Buchanan v. Warley in 1917. Ultimately, the court decided that the laws passed in Louisville were unconstitutional, thus setting the legal precedent that similar laws could not exist or be passed in the future.[14] This one legal victory did not stop towns from developing into sundown towns. City planners and real estate companies used their power and authority to ensure that white communities remained white, and black communities remained black. These were private individuals making decisions to personally benefit themselves, their companies' profits, or their cities' alleged safety, so their methods in creating sundown towns were often ignored by the courts.[15] In addition to unfair housing rules, citizens turned to violence and harassment in making sure black people would not remain in their cities after sundown.[16] Whites in the North felt that their way of life was threatened by the increased minority populations moving into their neighborhoods and racial tensions started to build. This often boiled over into violence, sometimes extreme, such as the 1943 Detroit race riot.[17]

Since the Civil Rights Movement of the 1950s and 1960s, and especially since the Fair Housing Act of 1968's prohibition of racial discrimination in the sale, rental, and financing of housing, the number of sundown towns has decreased. However, as sociologist James William Loewen writes in his book, Sundown Towns: A Hidden Dimension of American Racism (2005), it is impossible to precisely count the number of sundown towns at any given time, because most towns have not kept records of the ordinances or signs that marked the town's sundown status. He further notes that hundreds of cities across America have been sundown towns at some point in their history.[18]

Additionally, Loewen writes that sundown status meant more than just that African Americans were unable to live in these towns. Any black people who entered or were found in sundown towns after sunset were subject to harassment, threats, and violence, including lynching.[18]

The Supreme Court case Brown v. Board of Education ruled segregation of schools unconstitutional in 1954. Loewen argues that the case caused some municipalities in the South to become sundown towns: Missouri, Tennessee, and Kentucky saw drastic drops in African-American populations living in those states following the decision.[1]

African Americans were not the only minority group not allowed to live in white towns. One example, according to Loewen, is that in 1870, Chinese people made up one-third of Idaho's population. Following a wave of violence and an 1886 anti-Chinese convention in Boise, almost none remained by 1910.[18]:51 In another example, the town of Gardnerville, Nevada, is said to have blown a whistle at 6 p.m. daily alerting Native Americans to leave by sundown.[18]:23 Three additional examples of the numerous road signs documented during the first half of the 20th century include:[19]

Jews were also excluded from living in some sundown towns, such as Darien, Connecticut,[18] and Lake Forest, Illinois (which kept anti-Jewish and anti-African-American housing covenants until 1990).[20]

In Maria Marulanda's 2011 article in the Fordham Law Review titled "Preemption, Patchwork Immigration Laws, and the Potential for Brown Sundown Towns", Marulanda outlines the possibility for non-blacks to be excluded from towns in the United States. Marulanda argued that immigration laws and ordinances in certain municipalities could create similar situations to those experienced by African Americans in sundown towns. Hispanic Americans are likely to suffer, despite the purported target being illegal immigrants, in these cases of racial exclusion.[21]

Chinese Americans were also excluded from most of San Francisco, leading to the formation of Chinatown.[22] 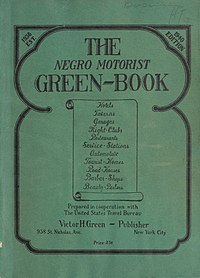 Described by former NAACP President Julian Bond as "one of the survival tools of segregated life,”[23] The Negro Motorist Green Book (at times titled The Negro Traveler's Green Book or The Negro Motorist Green-Book, and commonly referred to simply as the "Green Book") was an annual, segregation-era guidebook for African American motorists, published by New York travel agent and former Hackensack, New Jersey, letter carrier Victor H. Green.[23] It was published in the United States from 1936 to 1966, during the Jim Crow era, when discrimination against non-whites was widespread.[24]

Road trips for African Americans were fraught with inconveniences and dangers because of racial segregation, racial profiling by police, the phenomenon of travelers just "disappearing," and the existence of numerous sundown towns. According to author Kate Kelly, "there were at least 10,000 'sundown towns' in the United States as late as the 1960s; in a 'sundown town' nonwhites had to leave the city limits by dusk, or they could be picked up by the police or worse. These towns were not limited to the South—they ranged from Levittown, N.Y., to Glendale, Calif., and included the majority of municipalities in Illinois." The Green Book also advised drivers to wear, or have ready, a chauffeur’s cap and, if stopped, relate that “they were delivering a car for a white person.”[23]

On June 7, 2017, the NAACP issued a warning to prospective African American travelers to Missouri, suggesting that, if they must go to Missouri, they travel with bail money in hand. This is the first NAACP warning ever covering an entire state.[25][26]

Many suburban areas in the United States were incorporated following the establishment of Jim Crow laws. The majority of suburbs were made up of all white residents from the time they were first created. Harassment and inducements helped to keep African Americans out of new suburban areas. Schooling also played a large role in keeping the suburbs white. The suburbs often did not provide schools for black people, causing black families to send their children to school in large municipalities such as Atlanta, Georgia.[1]

African Americans were forced to pay a fee to the central municipality in order for their children to attend school there. Despite the fee, however, they were not provided with transportation to school in the city. The education barrier to African Americans in the suburbs caused many to migrate to cities across the United States. In addition to these educational barriers, home developers in the 1950s built all-white subdivisions, pushing more African Americans out of the suburbs.[1]