Sudhir Alladi Venkatesh (born 1966) is an American sociologist and urban ethnographer. He is a professor of sociology and African-American studies at Columbia University. In September 2016, he took a position at Facebook. He was a board member at Philadelphia-based nonprofit Public/Private Ventures until it disbanded on 31 July 2012. In his work, Venkatesh has documented criminal gangs and the drug trade, and has written about the dynamics of the underground economy including street prostitution, contributing his findings to the research of economics professor Steven Levitt.

Raised in Irvine, California, Venkatesh received a B.A. in mathematics from the University of California, San Diego in 1988.[1] He attended graduate school at the University of Chicago where he studied under Professor William Julius Wilson, focusing on Robert Taylor Homes, a housing project in Chicago about which he wrote a book, American Project. Venkatesh also authored a 2008 book titled, Gang Leader for a Day: A Rogue Sociologist Takes To The Streets. The book chronicles the life of urban poor in Chicago, particularly the Robert Taylor Homes and the gang, the Black Kings, whose leader J.T. he befriended (J.T. was renamed in the book for anonymity). He found that most foot soldiers in drug gangs make only $3.30 an hour. In 2015, Facebook CEO Mark Zuckerberg selected the book for his "A Year of Books" book club.[2] In 2017, it was reported that AMC Networks would be developing a drama series adaptation from the book.[3]

In a separate research project with Steven Levitt, he hired former sex workers to track working street prostitutes in Chicago, finding that they make about $30–$35 an hour, with those working with pimps making more and suffering fewer arrests.[4][5] A street prostitute was arrested about once per 450 sexual encounters ("tricks"). Condoms were used in only 20% of the contacts.[6]

In 2009 Venkatesh became director of Columbia University's Institute for Social and Economic Research and Policy, or ISERP. In 2011 Venkatesh was the subject of an investigation on spending at ISERP. In 2012 Venkatesh revealed to The New York Times that he had reimbursed Columbia University for approximately $13,000 for funds that were misallocated during his tenure as director of ISERP.[7] Venkatesh currently writes about the advertising industry. He also served as co-editor of the American Sociological Association journal entitled "City & Community".

He has also contributed to Steven Levitt and Stephen Dubner's Freakonomics in a chapter entitled, "Why Do Drug Dealers Still Live With Their Moms?" 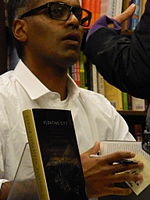